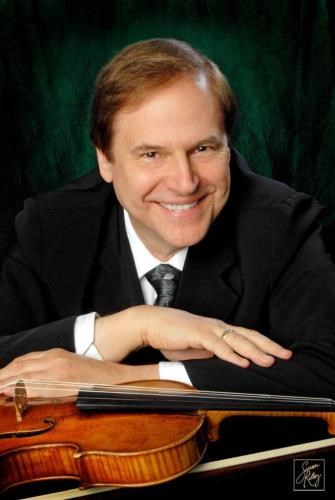 Born in 1943 in Lynn, Massachusetts to two professional musicians, Harry and Mary Kobialka, Daniel and his younger brother Jan were introduced to the family tradition of playing classical music at an early age. Daniel distinguished himself as an outstanding violinist right away, and at age 19 he made his public debut at Carnegie Hall in New York to rave reviews. Daniel continued to excel in musical pursuits, including being selected by Leonard Bernstein to be the Concertmaster for the Premier of his Mass.

In addition to his musical pursuits, Daniel took a career hiatus and enlisted for four years with the U.S. Air Force Band during the Vietnam War with his brother Jan; he was honorably discharged as a Tech Sergeant.

Daniel culminated his formal education by graduating from The Catholic University of America in 1971 with a PhD in Musical Arts, after which he relocated to California where he joined the San Francisco Symphony as Principal Second violinist and began teaching at Notre Dame University. Always searching, Daniel also continued to explore different genres of music, receiving several grants to study indigenous music from Japan and even recording with the band Ambrosia on several of their popular albums.

Over the next four decades, Daniel often performed as a soloist with the Boston Symphony Orchestra, the San Francisco Symphony, and as Concertmaster for many years at the annual Mostly Mozart festival. Of special note, he continued to compose and premier his work with great success, including his pioneering research and development of the Zeta Polyphonic violin for which he composed the "Concerto for the Zeta-Polyphonic Electronic Violin" commissioned by the San Francisco Symphony and performed by him in 1991.

Not satisfied with merely performing, Daniel also founded his own record company, LiSem Enterprises, Inc., in 1981. Over the years he has produced a massive catalog of recordings of his own interpretations of classical, new age, folk, and jazz music, as well as exploring the avant-garde music that was a central passion for him. His fascination with the connection between music and healing often guided his recording projects, and many of his recordings have been used in clinical research to show the positive effect of music on the human psyche.

Only recently retired, Daniel continued to perform as Concertmaster for the Kerrville Texas Symphony of the Hills, taught multiple private students, and oversaw all activities of LiSem Enterprises. While in his 60s, Daniel was diagnosed with IBM, a progressive muscle-wasting disease, that he fought for many years. Even so, Daniel continued to perform, teach, volunteer, and stay involved in the community.

Despite decreased use of his hands, Daniel immersed himself in composing new music, working with other musicians, and teaching children and young adults. Up until his final illness, Daniel was almost constantly to be found in his studio and had just completed his final album prior to his untimely death. Daniel's music will continue to be available on CDs and streaming platforms such as Pandora, Spotify, iTunes, Amazon Prime and Apple Music.

Daniel is survived by his life partner, Lilly B. Gardner; his brother Jan and his wife Gayla; children, Lisa, Semyon, Alina, and Ivan; and two grandchildren, Tanor and Mari Andre.

Published by Express-News on Jan. 31, 2021.
To plant trees in memory, please visit the Sympathy Store.
MEMORIAL EVENTS
To offer your sympathy during this difficult time, you can now have memorial trees planted in a National Forest in memory of your loved one.
Funeral services provided by:
Porter Loring Mortuary North
MAKE A DONATION
MEMORIES & CONDOLENCES
Sponsored by Porter Loring Mortuary North.
2 Entries
Apart from his talents as a musician, Dan was an incredible teacher, even for older "returning" students like myself. Relearning bowing (etc) in my 50s was excruciating but worth it! Dan was able to breakdown into specific "microsteps" the broader techniques that professionals internalize and perform "automatically". He was also a terrific coach. Under Dan's tutelage, I became more able to express on the violin the music I heard in my head [and heart]. Jan1943 was a good year for music!
Carol C. Mukhopadhyay
Other
June 21, 2021
Dan, Jan and I were "faculty brats" at New England Music Camp in Maine where our fathers taught. I remember him as an incredibly talented young boy. He was always nice and not at all impressed with himself outwardly. He was by far the best musician there. I have followed his success through the years with admiration. My condolences to Jan and the rest of his family.
constance Ramsdell
Acquaintance
May 26, 2021
Showing 1 - 2 of 2 results