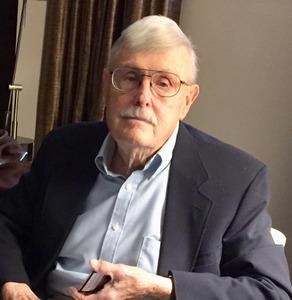 He was born in Houston, Texas to Agnes Davidson and Charles Davidson.

David grew up in Beaumont, TX where he developed a passionate interest in the outdoors, nature and camping as a Boy Scout. He graduated from Beaumont High School with honors and as an Eagle Scout. He attended Rice University graduating with a BA and BS in Mechanical engineering. While obtaining a Masters degree he was a Naval ROTC student which lead to serving as an officer and navigator for three years aboard the destroyer USS Gearing.Upon release from the navy he moved to San Antonio and became a young staff engineer at Southwest Research Institute. During this time he met his future wife, Patricia Collinge. He returned to Rice University where he obtained a PhD in Materials Science/Mechanical Engineering.

David returned to Southwest Research Institute in 1968 for a successful and long career in Material Science. He published over 200 technical papers and developed unique research skills using the scanning-electron microscope and stereo imaging. He was known world-wide for his work on fatigue crack analysis. During his busy career he completed two sabbaticals-a year in Rio de Janeiro and Oxford University. He retired after 35 years.

For the last 20 years he and Patricia have focused on restoring a Hill country property, birding trips and summers in Colorado. He served on the board of the Winston School, The Nature Conservancy of Texas and the American Bird Conservancy.

David is survived by his wife, Patricia, of 56 years, and his daughter, Dianna Davidson of Delta, CO and son, Daniel Davidson of San Antonio, TX.

The family wishes to thank VITAS for their hospice care.

Donations in David's memory may be made to the American Bird Conservancy, P.O.Box 249, The Plains, VA 20198.

Published by Express-News on Oct. 3, 2021.
To plant trees in memory, please visit the Sympathy Store.
MEMORIAL EVENTS
To offer your sympathy during this difficult time, you can now have memorial trees planted in a National Forest in memory of your loved one.
MAKE A DONATION
MEMORIES & CONDOLENCES
5 Entries
I am saddened to hear Dave's passing. My deepest condolences to his immediate and extended family. I knew Dr. Davidson at SwRI for many years during my career in the Material Sciences Department. He always had a positive attitude and easy to talk to. He was a highly renowned scientist, built one of a kind electron microscope; made unique innovations and contributions in the material sciences and micromechanics areas. He was able to explain complex problems in simple terms so that anyone can understand. He was a great presenter and a teacher at heart. He was very conscience of the environment and strong believer in recycling. He would take his used forks, spoons for recycling. He will be missed deeply. May his souls rest in peace.
Swami Swaminathan
October 8, 2021
Dave Davidson was a great scientific leader. I worked with Dave on several projects at SWRI. He would always was a helpful person if i had a problem finishing his project work. Everyone will miss him at SWRI. Hoping he is watching over everyone in the Research area and giving advice from above. Great Man.
Forrest Campbell
Work
October 7, 2021
I have the most beautiful memories of our trips to Independence Creek, Diamond Y Springs, and your Hill Country property. I don't know anyone more commited to conservation and science. David was a man of integrity and principle. I admired him and am grateful for the time I spent with him. May he rest in peace and may Pat and his childred be surrounded with love and support. With respect and love, Debbie Brient
Debbie Brient
October 6, 2021
I am so very sorry that David has passed. I worked with him when I first came to SwRI and then for a number of years... He was a good man and a brilliant scientist. He was the one who first introduced me to Machu Picchu and peaked my curiosity for other such places... Keeping you all in my prayers for comfort and healing.
Julie Bowles
Work
October 5, 2021
We lost touch several years ago. We have fond memories of our friendship with David and Pat at UPC.
Carl W. and Liz Helser Col Ret
Friend
October 3, 2021
Showing 1 - 5 of 5 results