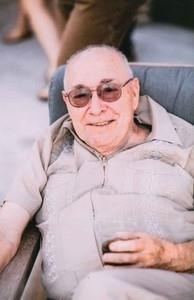 He was born in Enniscorthy, County Wexford, Ireland on February 11, 1933, beloved son of the late Bernard and Mary Ellen Dempsey.

Devoted husband of 57 years to the late Eileen Dempsey (nee O'Driscoll) with whom he had six children. Denis will join in heaven with his daughter Helena. He will also join with his sisters Kathleen O'Driscoll, Margaret O'Sullivan and Sandy Mitchell, along with brothers Patrick and Bernard Dempsey.

He was educated by the Christian Brothers and emigrated to America in 1955. He enlisted in the US Air Force and served his new country for 22 years, retiring as a Captain. He then returned to school and earned a second Master's Degree and spent 20 years teaching Math and History in the Southwest School District.

Upon his second retirement he donated much time to the church, as an usher, reader and volunteer at the St. Vincent de Paul Society at Resurrection of the Lord Parish – where he and Eileen were founding members. While saddened by his passing, his family is confident in the promises of the Lord.