Published by San Antonio Express-News on Jul. 25, 2014.
To plant trees in memory, please visit the Sympathy Store.
MEMORIAL EVENTS
To offer your sympathy during this difficult time, you can now have memorial trees planted in a National Forest in memory of your loved one.
Funeral services provided by:
ANGELUS FUNERAL HOME
MAKE A DONATION
MEMORIES & CONDOLENCES
41 Entries
Monsignor brosnan first help me in the early eighties and if it wasn't for the patrician movement and his commitment to substance abuse I don't think that I would be alive today I met so many beautiful people there from Mr Shelton to Mr cook to hippo Sam Salas Mary Tyra Kenneth godly but let's just goes on and on and on I know there's a place alongside Jesus Christ for Monsignor
Bobby. Hernandez
Student
March 19, 2021
Dear Msgr Brosnan, Father, Padre, I speak on behalf of many former individuals that you have helped. Thanks to you for helping them and thank you from me a young kid from New Jersey thanks for giving me my first job at PM. What a life changing experience. See you soon in Killarney at your special resting place. Msgr Liam and Ina thank you for sharing your dear brother with us. He was dearly loved!
Mary Bohne
August 5, 2014
My sincerest condolences to you Liam & to Ina. I pray that God sends His Comforter to you both.
Ruy D'Amico
August 3, 2014
It was my pleasure to work for Fr. Brosnan for 5 yrs at the PM. He taught me compassion, 'there but for the grace of God go I'. I will never forget. RIP Padre.
Patty Garcia
August 1, 2014 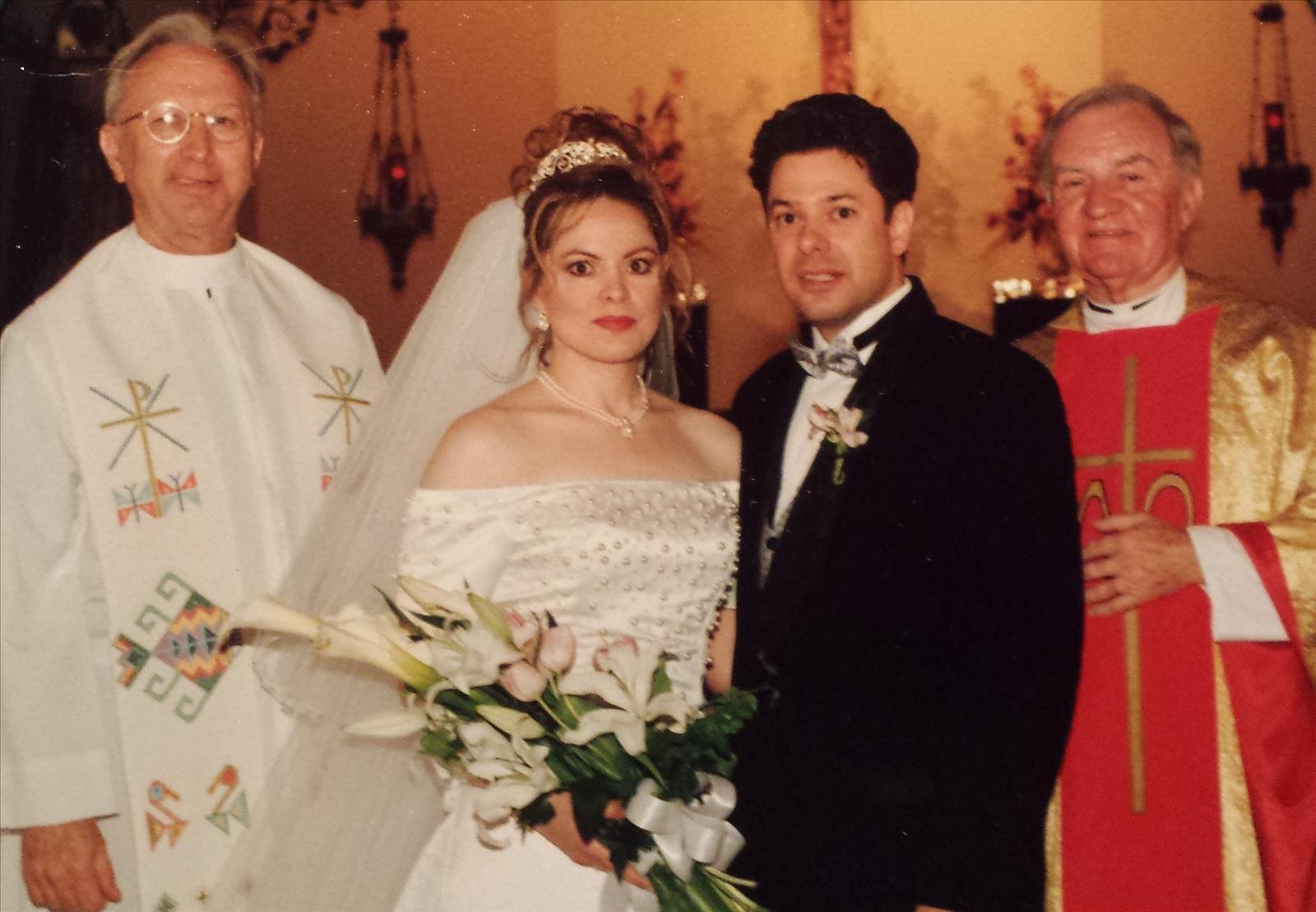 Celebrating a life well lived. He and his brother married us in 1997 and my husband's parents in 1963.
Cerise and Marc Cisneros
July 31, 2014
My deepest sympathy for the Brosnan family. My dad, Henry DeCleene, was one of the founders with Father Brosnan of the Patrician Movement while at St. Patrick's. He inspired many and made a better life for all that was involved. He was loved by all.
Darlene DeCleene- Brymer
July 30, 2014 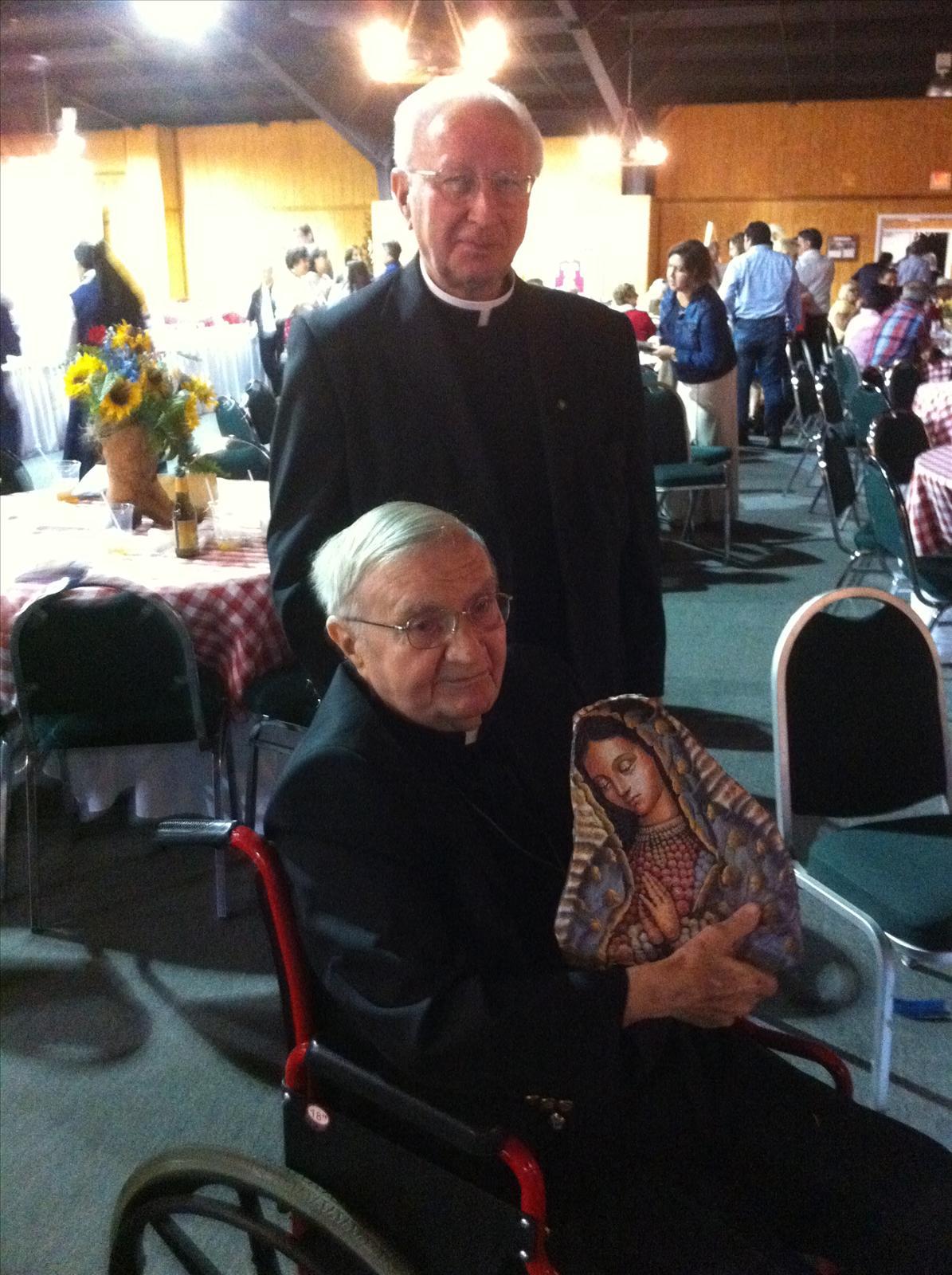 Todd Stillwell
July 29, 2014
Father Brosnan, you taught me so many things which I have carried with me in every step of my life, both personally and professionally. Thankyou for taking time in 1985 to hire a naive St. Mary's graduate to be a P.M. Counselor where I learned more about life and human behavior than I ever expected. No goodbyes ever, we will see you later!
Erik Vasys
July 29, 2014
May happy and loving memories of your brother, Dermot, bring you, Msgr. Liam and Ina, comfort and peace. All our love and prayers to your family.
Sandy & Bob Baptiste
July 28, 2014
He fought the good fight, he ran his appointed course with endurance and now surrounded by a great cloud of witnesses he will hear the Lord Almighty saying, "Well Done Good and Faithful Servant!" Well Done Monsignor Brosnan.
Melanie Pollock Glasper
July 28, 2014
Msgr. Brosnan: I truly am thankful that I got to know you as a friend, mentor and fellow professional. You were a man of God with the compassionate calling of helping the less fortunate, the disenfranchised, the forgotten of society. What a noble mission you undertook and accomplished. Rest of your labors in the peace of Our Lord Jesus. Our condolences to the Brosnan family.
Sergio Soto Sergio Soto
July 27, 2014
Msgr. Brosnan has always been an inspiration and a friend to me ever since I was a student at St. Patrick's Parochial School. May he rest in peace with God.
My condolences to the family.
Eloise O'Con Galvan
July 27, 2014
You helped create a more just & compassionate world. Thank you for always believing in us at Holy Cross! May you rest in peace dear friend.
Elizabeth Eguia-Garcia
July 27, 2014
Msgr. Liam: Fr. Dermot married Eddy Virginia and me in November 1963 and he and you remain fondly in our memories over these 50 plus years. May God always be with the Brosnan family.
LT. General Marc Cisneros(U.S. Army Ret)
July 26, 2014
Sincere condolences to Fr. Liam and Ina. San Antonio was very blessed to have Msgr. Brosnan doing the difficult work he did for so many years.
Ellen Brennan Mosley
Ellen Mosley
July 26, 2014
Our condolences to the family.
Rena and Ray Formanek
July 26, 2014
Fr. Liam, our prayers are with you and Ina on the loss of your dear brother. We pray for peace and comfort for you both.
Mike & Nancy Glynn
July 26, 2014
Msgr. Liam,
I had the honor of working with Msgr. Dermot during his recent time at WS. I am sorry to hear of his passing and hope you find comfort knowing he is in Heaven. What a remarkable man. You are also a remarkable man and devoted brother. You both made an impact on me despite our short time together. May God contine to bless you.
Trisha Shope, OT
July 26, 2014
Father Liam and Ina, sorry to hear of Father Noel's passing. You are in my thoughts and prayers.
Becky Roberts
July 26, 2014
Rest in Peace MSGR.Brosnan.We butted heads many times,but you,and the PM's(72 & 84 ) help put me on the long road to recovery. We crossed paths for a reason and I will always be grateful.
Leo Warden
July 26, 2014 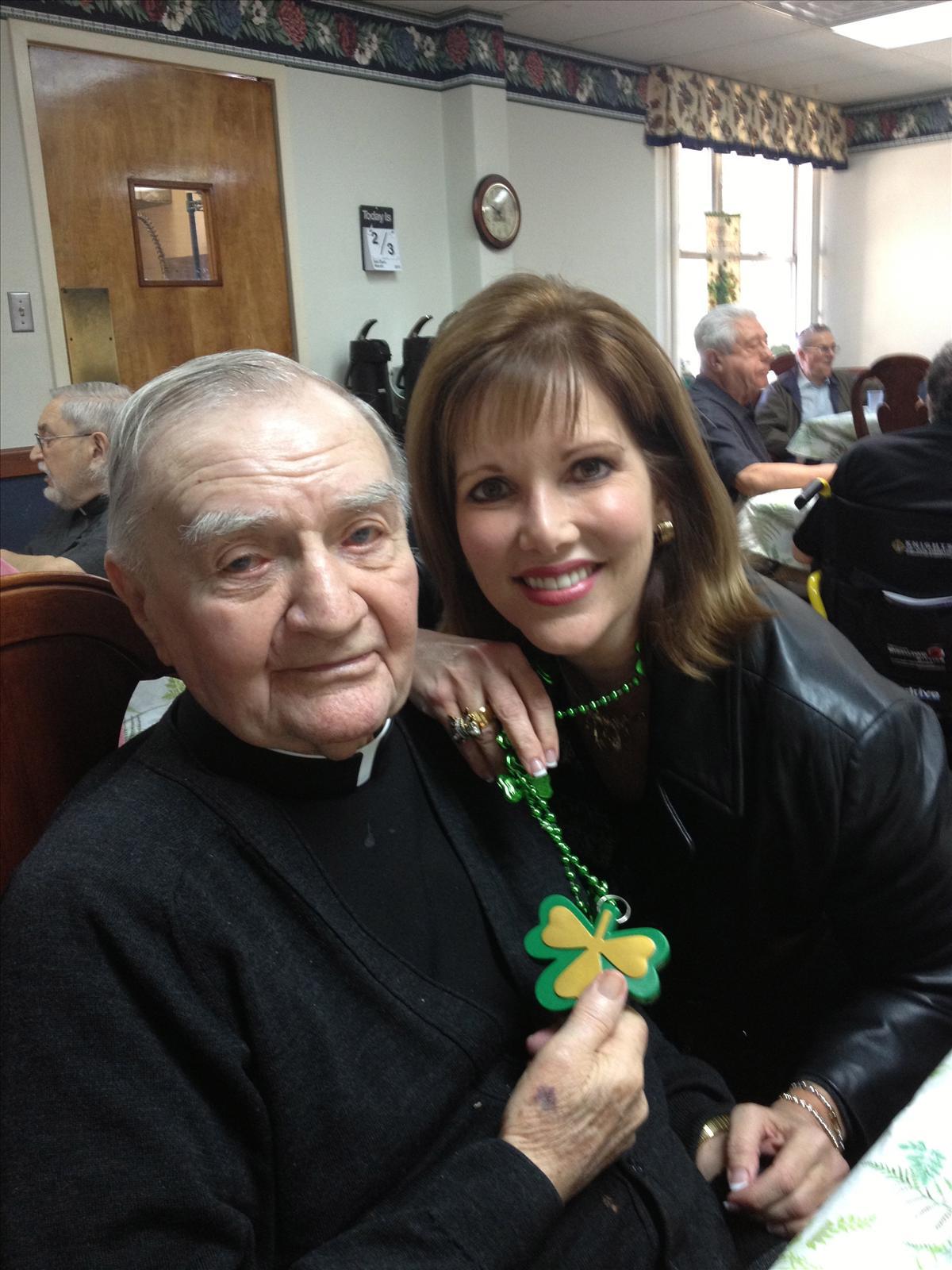 In addition to Father Brosnan's incredible legacy pioneering the Patrician Movement and saving thousands of people's lives, I was proud to serve with him for years on the Board of St. Peter's-St. Joseph's Children's Home. Again, he is my second "father," and I will miss him but know he is now home with the Lord. God bless you Dermot and may you rest in peace in Ireland. Sincerely, Karen Gallagher/former KSAT-12 news anchor/Friends of Padua board member
Karen Gallagher
July 26, 2014
Msgr. Dermot Brosnan was like a second father to me. It is my greatest hope that I can help carry on his legacy in my own small way, helping those who are addicted learn how loved they are by the Lord and how much they have to give to others. He taught me so much about our Lord's forgiveness and understanding and always challenged me to do more with the gifts God has given. I will miss you, my friend but I know you are in heaven with God. I love you, Karen Gallagher Former KSAT-12 News Anchor
Karen Gallagher
July 26, 2014
Thank You MSGR.Brosnan.I was 18 years old when i first met you.(1972)you gave me hope,a job,an education,many many friends,and much more. I will never forget one of the most inportant persons in my life. Just looking at your picture give me strength. Rest in peace and my condolence to your family.
Danny Hood
July 25, 2014
I learned much from Father Brosnan in my short years of work at the PM. With this foundation I have been blessed to go on to teach other clients and students what he taught me. Like children's children they too are now teaching what we learned from him. His knowledge will live on for years to come.
Gary Gordon
July 25, 2014
MSGR. LIAM---OUR THOUGHTS AND PRAYERS ARE WITH YOU AND YOUR FAMILY IN THE LOSS OF YOUR DEAR BROTHER.
Jim & Joan Coleman
July 25, 2014
Msgr. Brosnan was a good parish priest and a light for everyone that new him. He will be missed.
Todd Stillwell
July 25, 2014
MSGR LIAM AND INA,
WE HAVE YOU AND YOUR FAMILY IN OUR PRAYERS, BOTH LIVING AND IN HEAVEN.
GINNY AND JIM LAURA
July 25, 2014
I worked with Father Brosnan at the Patrician Movement. May he rest in peace.
Terry Rolen
July 25, 2014
As the days and weeks pass, and as you return to life's routine, may you continue to feel comforted by the love and support of family and friends.
July 25, 2014
Sending up prayers with our deepest sympathy in the loss of Rev. Msgr. Dermot Brosnan. You were so loving to him and took such good care of him. Now he is in the arms of our Lord. He has done much beautiful work here and it was time for his eternal reward.
Norvin and Mary Friesenhahn
July 25, 2014
RIP
Rachel Campos
July 25, 2014
With our deepest sympathy to the family of Rev Msgr Brosnan we new him when he first came to St Patricks he was a wonderful man he will be missed. God Bless you Father Brosnan Linda & Raymond Persyn
Linda & Raymond Persyn
July 25, 2014
Msgr. Brosnan be with God this day for he is now in his heavenly home. Msgr. Liam and Ina, may God continue to be with you both during this difficult time! God continue to bless and protect you both! It was nice to visit with Msgr. Dermot a month ago and his love for Our Lady of Guadalupe was very evident. May she wrap him in her cloak for eternity. Love to you all.
Susan Burrier
July 25, 2014
Home at last....your time here touched many lives. Rest in peace Rev. Brosnan.
Letty Esquivel
July 25, 2014
Go raibh tú a bheith resting i lámha na ár dTiarna Íosa Críost. Síochána a bheith in éineacht leat.
Robert Anderson
July 25, 2014
I had the pleasure had meeting Mgr. since 1973 & worked with him both Professionally & personally. what a great & holy Priest & an example for all of us. He was a real "Parish Priest" in all his dealings & works throughout his Life! He has truly earned his "Heavenly Reward"! May he rest in Peace. GOD Bless him.
Lili Durand
July 25, 2014
Unconditional love manifested…you will be missed Father.
Michele Brown
July 25, 2014
In loving memory of a wonderful person. We will love you and miss you always.
Martin & Esther Garza, SR
July 25, 2014
Our deepest sympathy on your loss. He was just known as Father Brosnan when I worked with him at the PM, he was a wonderful person and he did so much for so many. He might have been small in stature but he was huge in all that he did.
Sylvia & Eddie Farias
July 25, 2014

We express our deepest sympathy to the family and friends of Reverend Monsignor Dermot Brosnan during this difficult time. We are so very proud to have known this beautiful priest who gave of his life to serve God and his people through his priesthood. He made a tremendous impact on our community of San Antonio with his development of programs to treat drug addition, especially The Patrician Movement. And ... he did it with "an Irish flair!" It is our belief that he will rest in peace and experience the eternal glory of God's Kingdom.
Dcn. Larry Brisiel & Family
July 24, 2014
"The world is not interested in what we do for a living. What they are interested in is what we have to offer freely - hope, strength, love and the power to make a difference!” And a difference Father Brosnan did make, in the lives of many, through his hope, strenght and love. We will love you and miss you always. God bless you Father Brosnan.
Benny & Alejandra Puente
July 24, 2014
Showing 1 - 41 of 41 results