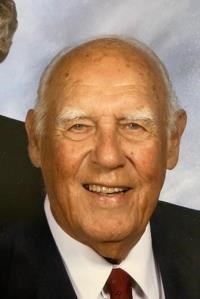 Edmund Cody was born in South Carolina and raised in San Antonio, Texas.

He is survived by son Carl Cody and wife Cathi, daughter Lynne Rector and husband Jim, daughter-in-law Sally Cody, and brother-in-law Jim Carson. He has five grandchildren and nine great grandchildren, who were the light of his life. He is predeceased by his wife Carlta Cody and son Thomas Cody.

Ed graduated from Jefferson high school in 1942 and went on to earn a bachelors degree from Furman University and a Masters degree in education from Trinity University. He began his career as an educator with Northside ISD in 1952. He served as principal of Helotes and Leon Valley Elementary school and later as assistant superintendent. In 1965 Cody was named superintendent of NISD and served until his retirement in 1982. Ed was an avid hunter, fisherman, and golfer. He loved his church and spending time with family.

In lieu of flowers a donation can be made to the Northside Education Foundation or Woodland Baptist Church.

Published by Express-News on Nov. 21, 2021.
To plant trees in memory, please visit the Sympathy Store.
MEMORIAL EVENTS
Nov
22
Memorial service
11:00a.m.
Woodland Baptist Church
15315 Huebner Rd., San Antonio, TX
Funeral services provided by:
Mission Park Funeral Chapels Cherry Ridge
MAKE A DONATION
MEMORIES & CONDOLENCES
Sponsored by Mission Park Funeral Chapels Cherry Ridge.
5 Entries
Carl and Cathy. I am so saddened to hear of Mr. Cody's passing. He and your mother were so kind and caring whenever I visited with them at Oak Hills. You and the family are in my prayers.
Lynda Lewis Thomas
Friend
November 23, 2021
What a wonderful man who had a way of making everyone feel special! I miss him already.
Beth Pogue
Other
November 22, 2021
All of the BOLDT family (passed & living) loved and admire Ed. He was a tremendous educator and inspiration to so many. Blessings to all the family. Cheryl & Robin Boldt
Cheryl & Robin Boldt
School
November 22, 2021
Grief can be so hard, but our special memories help us cope. Remembering you and your loved one today and always.
Rosemary Marmon
Friend
November 22, 2021
May God bless you and your family in this time of sorrow.
Nancy Cherry
Friend
November 22, 2021
Showing 1 - 5 of 5 results