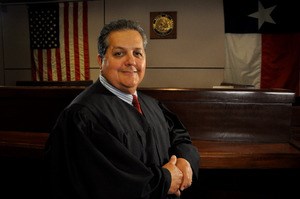 Ernest Acevedo Jr. was born in San Antonio, Texas on August 23, 1951. He spent his formative years learning the value of hard work, helping his father, uncles, and cousins at the Terminal Produce Market.

Ernest attended Thomas Jefferson High School where he met Diana Castañon. They were married on July 30,1969 and he would spend the rest of his life with her. They went on to have three sons. He worked his way through college and graduated from St. Mary's Law School in 1976. He founded his own practice with virtually no connections in the legal world and found success with his strong work ethic, geniality, charisma, and kindness.

Ernest spent the next 45 years building his practice and cementing his reputation as an honest and respected member of the legal community. In 1994, his eldest son, Ernest III, joined him in private practice. For the last 27 years Ernest was proud to partner with his son and passed on his legal knowledge and expertise to him. Ernest took great satisfaction from having helped thousands of individuals who needed assistance through the years. He was also a founding member of the Mexican American Bar Association.

In 2009, Ernest was appointed as Judge to the newly created County Court 14, where he focused his efforts on helping defendants who appeared before him. He believed deeply in rehabilitation and giving guidance to those who were heading down the wrong path.

Ernest was a positive force amongst his family and friends. He was always smiling and was known for his generosity. An avid golfer, Ernest was blessed to have played countless rounds with his father, sons, grandchildren, and many golfing buddies. One of his greatest pleasures was traveling with family and friends. He loved visiting new places and experienced many of the wonderful things the world has to offer. Ernest's professional achievements were vast, but his greatest accomplishment was his family. He never missed an opportunity to express his love for his wife or praise the accomplishments of his children.

In lieu of flowers, donations may be made to Roy Maas Youth Alternatives at rmya.org.

Published by Express-News on Jul. 18, 2021.
To plant trees in memory, please visit the Sympathy Store.
MEMORIAL EVENTS
Jul
22
Visitation
5:00p.m. - 7:00p.m.
Porter Loring Mortuary McCullough
1101 McCullough Ave., San Antonio, TX
Jul
22
Service
7:00p.m.
Porter Loring Mortuary McCullough
1101 McCullough Ave., San Antonio, TX
Funeral services provided by:
Porter Loring Mortuary McCullough
MAKE A DONATION
MEMORIES & CONDOLENCES
Sponsored by Porter Loring Mortuary McCullough.
11 Entries
Our condolences to the Acevedo family, from the Morin Family.
The Joe R Morin Family
July 24, 2021
My sincere condolences to the Acevedo Family. My mother was Ernesto Sr.'s 1st cousin. They were born and raised in Sabinas Nuevo Leon Mexico. Although I did not know Ernesto Jr. personally, my mother did and he was gracious enough to assist her with her will even though this was not his area of law. I have always thought that was very nice of him to have done that for her. May Ernesto Jr. Rest in Peace.
Guadalupe (Acevedo) Garza Abundis
Family
July 22, 2021
My deepest sympathy to the Acevedo family. May Ernest rest in the arms of the Lord Jesus Christ. May the Lord give you Diane and your dear sons peace and tranquillity.
Linda Garza
Friend
July 21, 2021
My deepest condolences to the Acevedo family. I had the privilege of attending grade school with Earnest , he was always the nice person in the group and no matter what the topic of conversation he always had a smile on his face. We kept in touch seasonally , met several times at his office of practice , played golf in a tournament, Earnest never changed , remained the same nice , peaceful and mild manner person. Only the Lord knows the when , how and why we are taken. May the family find peace , understanding and comfort in knowing that Earnest is in a better place. Blessings !!
Joe J. Rubalcava
Family
July 20, 2021
So sorry for your great loss, Diana. May God bless you and your family in this time of sorrow. Rick and Olivia De La Zerda Reyna
Olivia DevLa Zerda Reyna
Friend
July 19, 2021
It is with a heavy heart to extend our condolences to the Acevedo Family. Ernest's Father's generation is memories we hold close. The Produce Family showed, gave, and maintain a strong advocates of our village, community and San Antonio city of and for the raza. We prayed for time and healing to carry each of you through this journey with God's lead. Classmates and friends
Alejandro and Diana Medina
July 19, 2021
Diana an Acevado family, I was deeply saddened to hear of Ernest passing. My sincerest condolences an pray our Good Lord will comfort your sorrow. Our loved ones leave us but their memories live in our hearts! God Bless, Gregg Guajardo
Gregg Guajardo
Friend
July 19, 2021
Ernest you were a wonderful friend. Through your children your light will comtinue to shine. Marty
Marty Mireles
School
July 19, 2021
Condolences to the Acevedo Family from the Neaves family.
Blanca Neaves
School
July 18, 2021
May the love of friends and family carry you through your grief. Ernest will be missed and my family knew him well as we all grew up in the same schools and area. Rest In Peace Ernest and sending prayers to your family.
Irma Zatarain
Friend
July 18, 2021
I am sorry to hear about the death of my colleague. May he rest in eternal peace forever. My sincere condolences to the family
MILTON FAGIN
July 17, 2021
Showing 1 - 11 of 11 results