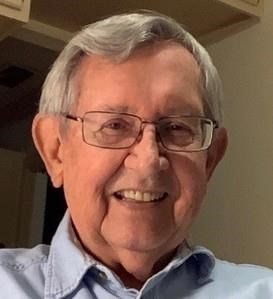 Gene Ernest Maeckel, of Poth Texas, passed away peacefully at home surrounded by family on November 18, 2021.

Born and raised in Poth, Gene graduated from Poth High School and the University of Texas at Austin where he earned a degree in mechanical engineering in 1953. He met the love of his life, Sonia Slaby while working in Milwaukee, Wisconsin and they were married in 1957. They returned to the San Antonio area immediately after, and never left. Gene worked for many years as an engineer and project manager for City Public Service, the local electric utility. He was instrumental in the construction of several power plants in the San Antonio area.

A life-long volunteer, Gene was active in the Wilson County Historical Commission (where he served as Chairman for many years), San Antonio Dog Training Club (co-founder and President), and served on various committees of the San Antonio River Authority and the San Antonio Conservation Society. He was also very active in city government, serving on the Poth City Council for several years and as mayor from 1988-1997. Gene was named Regional Citizen of the year in 2000 by the Alamo Area Council of Governments.

Gene was preceded in death by his wife Sonia and will be greatly missed by his two children—Clay Maeckel of Poth, and Carrie Merritt, along with her husband Steve, of Wimberley, Texas, and Gene's granddaughters Sydney Merritt of Los Angeles, California and Jillian Merritt of Austin, Texas.

A memorial will be planned for some time in January 2022.

Published by Express-News on Nov. 21, 2021.
To plant trees in memory, please visit the Sympathy Store.
MEMORIAL EVENTS
To offer your sympathy during this difficult time, you can now have memorial trees planted in a National Forest in memory of your loved one.
Funeral services provided by:
Finch Funeral Chapel - La Vernia
MAKE A DONATION
MEMORIES & CONDOLENCES
Sponsored by Finch Funeral Chapel - La Vernia.
1 Entry
Clay and family, We are sorry to hear of your father's passing. We send our sympathy and prayers to you all.
Lorene Maeckel Brown and Beverly Brown Ward
Family
December 5, 2021
Showing 1 - 1 of 1 results