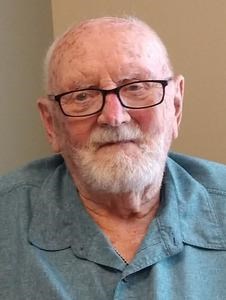 George E. Anderson passed away on September 20, 2021. George was born on May 22nd, 1928, to Viggo and Agnes in Albert Lea, Minnesota. He attended Albert Lea High School.

During the Korean War, George enlisted in the U.S. Air Force. He proudly served for 30 years and retired as a CMSgt.

He met his wife, Elaine, on a blind date in San Antonio and began a 54 year love story that will continue on.

George was preceded in death by his beloved wife, Elaine, his parents, Viggo and Agnes, and his sisters Virginia and Avis. He is survived by his son Carl (spouse Phyllis), his two daughters, Barbara and Patricia, his siblings Bonnie and Richard, four grandchildren, and two great-grandchildren.

George will be deeply missed by his family, friends, and the community.

George will be laid to rest with military honors, next to his wife, at the Fort Sam Houston National Cemetery.

Funeral services will be

private, for immediate family only.

Fond memories and expressions of sympathy may be shared at www.neptunesociety.com/location/san-antonio-cremation for the

Published by Express-News on Oct. 10, 2021.
To plant trees in memory, please visit the Sympathy Store.
MEMORIAL EVENTS
To offer your sympathy during this difficult time, you can now have memorial trees planted in a National Forest in memory of your loved one.
Funeral services provided by:
Neptune Society - San Antonio
MAKE A DONATION
MEMORIES & CONDOLENCES
Sponsored by Neptune Society - San Antonio.
0 Entries
Be the first to post a memory or condolences.