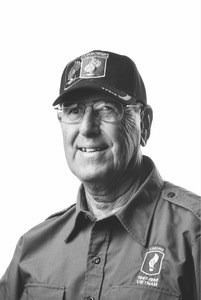 George grew up in Alexandria, Virginia, graduating from Mount Vernon High School in 1957. He attended Virginia Tech University graduating as a Distinguished Military Graduate, and commissioned into the MSC of the US Army. Later, he earned an MBA from The American University in DC.

George entered Active-Duty October 1961 as an Army Paratrooper with the famed 101st Airborne Division, Fort Campbell, Kentucky. While there he met the "smartest and most beautiful woman in the world": Barbara (Babs) Ann Steltenkamp of Fort Thomas, Kentucky. After they were joined in marriage at Saint Thomas Catholic Church, they moved to Mainz, Germany where George served as a Company Commander and Battalion Ops Officer in the 8th Infantry Division. Over George's 30-year career in the US Army, he served with distinction in many Army command positions: Commander, 48th Medical Battalion, 2nd Armored Division; Executive Officer for the CINCPAC Surgeon in Hawaii; Deputy Chief of Staff for Operations and Training ("DCSOPS") for the Army's Medical Command and Deputy Commander and Chief of Staff for the Army Medical Department Center and School. George also proudly served with distinction and valor in combat as a Senior Paratrooper with the 173rd Airborne Brigade, Republic of Vietnam, from 1967 to 1968, earning two Bronze Star Medals and the Combat Medical Badge.

After completing his military career in 1991, George embarked on a second career which included several government contract jobs. However, his favorite was being a Transition and Employment Assistance Counselor – helping soldiers transition from the U.S. Army to "Civilian Life."

For more than 19 years he worked as an (ACAP) counselor at various U.S. Army bases throughout the US, permanently retiring January 1, 2013.

Donations in George's memory, may be made to the American Cancer Society, the Vietnam Veterans of America, the Vietnam Veterans Memorial Fund, the 173rd Airborne Brigade Association, Disabled American Veterans (DAV), American Legion Post 100, Sparta, Wisconsin, Santa Rosa Catholic Church in Andice, TX. Friends and guests are invited to leave a message or memory in the Memorial Guestbook at www.ramseyfuneral.com

May no Soldier go unloved.

May no Soldier walk alone.

May no Soldier go forgotten.

Until they all come Home.

Published by Express-News on Sep. 19, 2021.
To plant trees in memory, please visit the Sympathy Store.
MEMORIAL EVENTS
Sep
20
Rosary
9:30a.m.
Holy Trinity Catholic church
20523 Huebner Road, San Antonio, TX
Sep
20
Funeral Mass
10:00a.m.
Holy Trinity Catholic church
TX
Sep
20
Inurnment
1:00p.m.
Ft. Sam Houston National Cemetery
San Antonio, TX
Funeral services provided by:
Ramsey Funeral Home - Georgetown
MAKE A DONATION
Please consider a donation as requested by the family.
MEMORIES & CONDOLENCES
Sponsored by Ramsey Funeral Home - Georgetown.
5 Entries
George was a friend and military colleague and we shared a mutual history with the 173rd Airborne Bde. We have stayed in touch by e-mail for many years and his sudden passing was a shock. He was a great guy and he will be missed by all who knew him. My condolences to Babbs and the family. May he rest in peace.
COL (Ret) John Erskine
Friend
October 4, 2021
My Condolenses to Babbs and ALL the Wahl Family. Never served with George, but always respected him via his outstanding MSC Reputation. God Bless, and may He RIP.
William Covington
September 24, 2021
George was a military colleague and a friend. He was a superb officer and a wonderful man. He always went the extra mile to help others and to mentor younger officers. He was a special man. I will miss him. RIP!
Larry Vervack
Friend
September 23, 2021
The staff of the American Cancer Fund at www.AmericanCancerFund.org is sorry to hear of George´s passing. We have received a memorial donation in his name and our sincere condolences go out to his family.
American Cancer Fund - American Cancer Association
September 22, 2021
We are so sad to hear of George´s passing! We pray that you, Babs and your family will find peace in time! We send you our love!!
Brenda and Johnny Conner
Friend
September 20, 2021
Showing 1 - 5 of 5 results