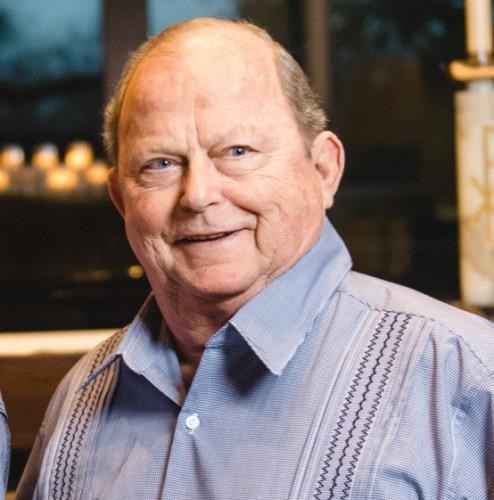 James Milas Johnson, age 76, died on Tuesday, January 5, 2021 at his home in San Antonio, Texas. Born on August 8, 1944 in Austin, Texas, James was the only son of Pearce and Sarah Johnson. James spent his youth in Del Valle and Austin, Texas. James attended Texas A&M University in College Station graduating in 1967. James attended St. Mary's School of Law, where he met a fellow law student, Karen Ruble Johnson, who became his wife of 46 years. James received his JD in May of 1970 and married Karen in August of that year.

Professionally, James was never afraid of a challenge. An attorney by trade, James practiced law in Austin and South Texas. However, he most enjoyed running a car dealership, Import Motors, in South Austin. While he loved his work, it was the people he met along the way that brought him the most joy. In fact, James' most treasured roles were that of father to his son, Hunter, husband to his wife, Karen, and friend to his countless loved ones.

James was a caretaker who deeply invested in those that he loved. He cared for his wife with such tender love and affection, as she was a great source of pride for James. James was a mentor, source of strength and best friend to his son, Hunter, as well as to many of Hunter's dear friends. His dry sense of humor and wit were the cornerstones of his wonderful stories, which he was quick to tell and one would be lucky to hear. A lover of the fighting Texas Aggies, dogs, hunting and cooking, James was a true Texan through and through.

James is preceded in death by his parents, grandparents and wife, Karen. James is survived by his treasured son, James Hunter Johnson and wife, Megan, and grandchildren, Beverly and Parsons, plus many friends and loved ones. Services will be postponed due to COVID. Donations in lieu of flowers may be made on James's behalf to the Texas A&M 12th Man Foundation or the ALS Association of Texas.

Arrangements by Weed-Corley-Fish Funeral Home, Austin, Texas – (512) 452-8811. Remembrances may be shared at www.wcfish.com.

To plant trees in memory, please visit our Sympathy Store.
Published by Express-News on Jan. 24, 2021.
MEMORIAL EVENTS
No memorial events are currently scheduled.
To offer your sympathy during this difficult time, you can now have memorial trees planted in a National Forest in memory of your loved one.
Funeral services provided by:
Weed-Corley-Fish Funeral Home North - Austin
MEMORIES & CONDOLENCES
Sponsored by Weed-Corley-Fish Funeral Home North - Austin.
0 Entries
Be the first to post a memory or condolences.