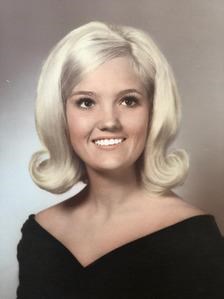 Jan attended Tomball High School and was a very active student. She was a member of the Science Club, Student Council, she played both volleyball and basketball, was a Cheerleader, was FFA Sweetheart, and won Miss Tomball in 1969. She graduated in 1969 and went to Southern Methodist University in Dallas where she graduated in 1973 with a Degree in Mathematics. While at SMU, Jan became a member of Tri Delta Sorority. Later, Jan attended the University of Houston where she obtained her MBA. She went to work for American Airlines where she was a world traveler and retired after 38 years. Jan was presented with a Fifty Year Tri Delta Sorority Pin in 2019. She had qualified and was in the process of becoming a member of The Daughters of the Republic of Texas. Unfortunately, she succumbed to the uncommon brain disease, Progressive Supranuclear Palsy before becoming a member. She was a graceful human being and was loved by all that knew her.

She was preceded in death by, her parents, Harvey Risien and Lessie Risien Calahan. Jan is survived by her daughter Anna McBride Ritchie; Son in Law Russell Ritchie, grandson Reid Ritchie; her son Dennis McBride, her siblings, Harvey V. Risien, Jr., Mark K. Risien, and Richard B. Risien; and numerous nieces, nephews, family and friends. In lieu of flowers, memorial contributions may be made to CurePSP: https://www.psp.org/iwanttohelp/ways-to-give/.

You are invited to signThe Guestbook atwww.porterloring.com

Published by Express-News on Jul. 11, 2021.
To plant trees in memory, please visit the Sympathy Store.
MEMORIAL EVENTS
To offer your sympathy during this difficult time, you can now have memorial trees planted in a National Forest in memory of your loved one.
Funeral services provided by:
Porter Loring Mortuary McCullough
MAKE A DONATION
MEMORIES & CONDOLENCES
Sponsored by Porter Loring Mortuary McCullough.
0 Entries
Be the first to post a memory or condolences.