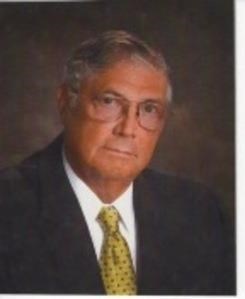 Leopold Castanon, Jr. went to be with our Lord on Nov.5, 2021 at the age of 87. He was born to Leopold Castanon, Sr. and Susie Herrera on July 19, 1934 in San Antonio, TX. He was a graduate of Brackenridge High School in 1952 and was a star football player on the All-City Team in 1951-1952. He graduated from St. Mary's University in 1960 with a degree in business. He served two years in the U.S. Army with an assignment in England. He married Patsy Nesmith Castanon on Sept. 6, 1959 and they had 62 loving years together. Leo was an avid deer hunter and loved sharing venison with friends and family. Leo retired from the Kmart Corporation in 1992 after 32 years as a general store manager.

Leo was a ninth generation San Antonian and a direct descendant of Francisco Hernandez, a military officer with the Alarcon Expedition that founded the City of San Antonio in 1718.

After retirement Leo engaged in a variety of volunteer activities including Habitat for Humanity where he put in hundreds of hours helping to build new homes for those in need. He was an active member of St. Thomas Episcopal Church, a member of the American Legion, The Sons of the Republic of Texas and the San Antonio Genealogical and Historical Society. Leo will be remembered as a generous, kind, and gentle man who loved to help out family and friends whenever needed.

He was preceded in death by his parents and his brother, Richard.

Leo is survived by his wife, his son, Christopher, two nephews, a niece and three great-nephews.

Interment will be at the Zephyr Cemetery in Zephyr, TX near his ranch.

In lieu of flowers, memorials may be made to a favorite charity.

Published by Express-News on Nov. 21, 2021.
To plant trees in memory, please visit the Sympathy Store.
MEMORIAL EVENTS
Nov
22
Service
10:00a.m.
St. Thomas Episcopal Church
TX
MAKE A DONATION
Please consider a donation as requested by the family.
MEMORIES & CONDOLENCES
1 Entry
Karen and I made a donation to Habitat for Humanity in memory of Leo. Our love goes out to you and your family.
James Fennell
Family
November 24, 2021
Showing 1 - 1 of 1 results