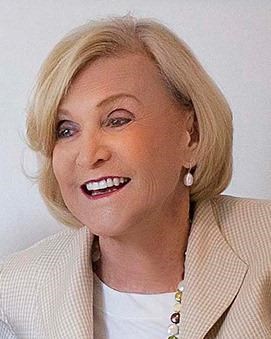 BORN
1936
DIED
2019
FUNERAL HOME
Porter Loring Mortuary McCullough
1101 McCullough Ave.
San Antonio, TX
May 23, 1936 - February 26, 2019
Liana Ljuba Epstein Barenblat was born on May 23, 1936 in Prague to a Czech mother, Alice Fried Epstein, and a Russian medical student, Isaac Epstein. They emigrated to New York in 1939, traveling on the S.S. President Harding, and lived with relatives in a tenement apartment. She learned English quickly and helped translate for her parents.

Summer camp was among the highlights of her childhood. For several years she attended Camp Windywood in Fishville, Louisiana, where as the only Jewish camper she played the accordion every Sunday morning for church services. Then she went to camp near Biloxi, Mississippi, where, after numerous attempts, she passed her junior lifesaving test. At age 15 she went to Camp Bonim, which was modeled on an Israeli kibbutz, and where she fell in love with the bugler, whom she married four years later. Liana and Marvin were married for 64 years.

She graduated from Temple High School and attended the University of Texas at Austin, where (in her own words) she "got an MRS degree and had a great time."

Liana was deeply devoted to family. Her five children and eleven grandchildren were her greatest joys. With her husband Marvin she traveled the world, including Europe, Asia, and Australia. She was also deeply devoted to a broad and diverse circle of friends. She loved to entertain, and celebrated every moment that life allowed.

In her words, "In addition to travel I love: a good party, music, the Pritikin Longevity Institute, bridge, contemporary art, Israel, the moon, and the Big Dipper. I wish I had written a book, learned to tap-dance, and mastered French, which I failed in college. I am blessed with an amazing family and incredible friends, gifts which I appreciate every day. My Judaism has always enriched my life and provided moral and spiritual guidelines."

Liana is survived by her husband Marvin; her children Bruce, Brad and his wife Sheri, Scot, Melissa and her husband Ron, and Rachel; and eleven grandchildren.

Donations in her memory may be sent to any charity that is meaningful to you.


You are invited to sign
the Guestbook at
www.porterloring.com

To plant trees in memory, please visit our Sympathy Store.
Published by San Antonio Express-News on Feb. 27, 2019.
MEMORIAL EVENTS
Feb
28
Memorial service
11:30a.m.
Temple Beth-El
211 Belknap, San Antonio, TX
Feb
28
Shiva
7:00p.m.
at the Barenblat family home
, TX
Mar
2
Shiva
7:00p.m.
at the Barenblat family home
, TX
Mar
3
Shiva
7:00p.m.
at the Barenblat family home
, TX
Funeral services provided by:
Porter Loring Mortuary McCullough
MEMORIES & CONDOLENCES
Sponsored by Porter Loring Mortuary McCullough.
18 Entries
So sorry for your loss. I was a sort of an adopted member of the Barenblat family.
Barbara Deason Warner
Friend
June 27, 2019
From an Annonymous Man in California. I'm so sorry for the loss of such a wonderful woman. I read the Rabbi's blog and feel saddened but, somehow inspired, to make my wishes come true through this woman's life.
A Musing Pilgrim
March 3, 2019
My condolences to all. You were all blessed to have been a part of her wonderful life. Best, Diane Huttner
March 2, 2019
A beautiful woman, inside and out, who lit up a room and always made one feel special. Her passing is felt by so many of us whose life she touched. Sending love to Marvin, the kids ... and the grandchildren I've never met.
Vicki Pitluk
Family Friend
March 1, 2019
Dear Barenblat family,
Life's race well run. Life's work well done. Life's victory won. Now cometh rest.
In memory of Liana "Lee" Epstein Barenblat, our classmate. We loved and admired you.
Classmates of Temple High School 1953
THS '53
Classmate
March 1, 2019
Mr. Barenblat, Scott, Melissa, Rachael, Brad, Bruce My deepest sympathies to your Family. Mrs. Barenblat, you and your Family made me feel special growing up. I never felt like an outsider, I received Love, Kindness, Respect from your Mother & Family. I will forever be grateful to your Mother who helped Shaped my childhood... God Bless you all I Love you!!!! Cornell Graves III
Cornell Graves
Friend
February 28, 2019
To all the Barenblats, I am so very sorry for your loss. She was such a sweet and loving woman. I'll always remember her warmth and beautiful smile. My heart goes out to you. I'm thinking of you all and sending lots of love.
Sandra Singer
Friend
February 28, 2019
Hi Marvin: As you know, Liana was one of the great people in our universe. Liana felt like a member of our family for all the many years that we knew her. She will be sorely missed. We'll look forward to seeing you soon and giving you our heartfelt hugs & kisses. Nancy & Len
February 28, 2019
To the family,
I am so sorry for your loss. May you find comfort in the words found at John 6:40 where God promises that our loved ones will live again.
February 28, 2019
An incredible woman. She will be sorely missed.Her charm, humor and strength were a guide for the rest of us. Marky loved her and enjoyed being with her.
Uwe and Candace Pontius-Andrews
Family Friend
February 28, 2019
Sending my condolences to the family. May God give you strength and peace during this difficult time. Psalm 29:11
February 27, 2019
My heartfelt deepest condolences to the family for the passing of Mrs B. She was the most caring and nicest person. Beautiful lady!
Henrietta Saldana-Paz
Friend
February 27, 2019
Dear Marvin and family
Jack Efron
Family Friend
February 27, 2019
On by half of the DeLeon family, it was an Honor to work for you and your family. She's was very respectful to me and my dad. Our prayers go out to you and your family.
EDDIE DELEON
Friend
February 27, 2019
I'm sorry for your loss. I'm sure your hearts are heavy at this time. May the " God of all comfort" bring comfort to your family (2 Cor 1:3). Your loved one will be at rest and in God's memory.
Courtney
February 27, 2019
My heartfelt condolences to the family and friends. May you always cherish the memories that you have with your loved one, and remember that God is always there for us like it tells us at 1 Peter 5:6,7. I hope you continue to feel love and support from your family and friends.
February 27, 2019
Dear Marvin and family.
Our deepest sympathy for the lost of dear Liana. Our love and prayers are with you at his very sad time.
We will always remember her as an exceptional, elegant, talented and loving lady she was.
Affectionately,
Nina and Carlos
Nina and Carlos Cardenas
Friend
February 27, 2019
David and Joanne Ranzer
February 27, 2019
Showing 1 - 18 of 18 results