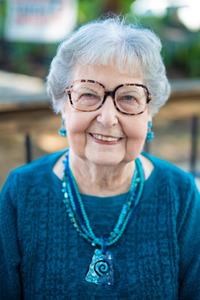 The family of Lois "Dawn" Garms mourns the loss of an amazing woman, wife, mother, grandmother, and great grandmother who died of congestive heart failure on July 4, 2021, with family by her side.

Dawn was born in 1931 in Toronto, Canada, to Lois and Fred Gardner. They soon moved to New York City during the Great Depression and endured joblessness, homelessness and food scarcity. As the family made its way south, they landed in San Antonio to be closer to relatives. Dawn's mother, a widow by that time, remarried Aubrey Holmes, a role model and loving stepfather to Dawn. She attended Brackenridge High School, where she was a member of the yearbook staff and Purple Jacket dance team. When she graduated, she was only 15 years old and heralded by the San Antonio Light newspaper as the youngest graduate in San Antonio in 1946.

She married Russell E. DeBerry in 1949 and together they had six children. In her second marriage to Walter A. Garms she found new love and a partner in entertaining, traveling and raising a blended family of nine. Together, they traveled the world in retirement while toasting and celebrating every grandchild and great grandchild's birth together.

Dawn was an accomplished professional who carved out a successful career for herself in civil service as head of military pay for the Army at Fort Sam Houston. She eventually retired from Kelly Air Force Base as a GS-11, a grade unheard of for females at that time.

As much as she loved her career, the job she took most seriously was raising her children. And, although Dawn's childhood was laden with hardship, she never once let the experience define her. Instead, she was determined to become the best mother possible to her kids. She was a great cook, fierce protector, wizard of accounting, enthusiast of proper grammar, lover of a good laugh and talented bowler. She rescued many furry friends and lost souls over the years, and had many close friends whom she cherished.

We will miss her wicked wit, soothing hugs, quests for grandchildren's "bugs" and her bright eyes and smile that could light up any room. We will also forever celebrate July 4th – her independence from longtime pain and physical decline - with fireworks as a tribute to how she sparkled while on this earth.

She was preceded in death by loving husband Walt Garms, and sons Scott DeBerry, Cary and Rocky Garms.

Sincere thanks to Velma De La Garza, as well as the Golden Hearts Luxury Senior Living and Embrace Hospice staff for their loving care and assistance.

A memorial service will be held at St. Andrews Methodist Church on August 3, 2021 at 11 a.m. In lieu of flowers, the family requests donations be made to the Humane Society of San Antonio.

To plant trees in memory, please visit our Sympathy Store.
Published by Express-News on Jul. 18, 2021.
MEMORIAL EVENTS
Aug
3
Memorial service
11:00a.m.
St. Andrews Methodist Church
, TX
MAKE A DONATION
MEMORIES & CONDOLENCES
10 Entries
There are so many fond memories of Dawn throughout the years. She always had a loving smile and hugs. Our most heartfelt condolences and love to the whole family.
Deb & Kit England
Friend
July 30, 2021
May God bless you and your family in this time of sorrow.
William Bothe
Family
July 29, 2021
My deepest and Most Heartfelt Condolence for the Family. I was Honored to Have Been a Part Of Your Life if For only a Brief period of Time "Mama Bear" I Learned So much about you and Of What a Wonderful Human Beings You Were... I Miss you...I´m sorry I wasn´t able to say Good Bye.... To Her Son And Beautiful Daughters And Grand Children, Find Comfort in Gods Promise That She is in His Kingdom Free of Pain And In His Warm Embrace.... My Love to You All....
Velma
Work
July 28, 2021
What a lovely obituary written for Dawn! There were many memories of Dawn we didn´t know, but we knew her well as the loving matriarch of her family. It is a tribute to her that she kept her extended family together over the years. (All those holidays, birthdays, weddings, births!) She was a lovely lady. We are happy to have known her.
Barbara and Randy Bell
July 21, 2021
Dear Marcia, I am so sorry for your loss, I hope you were a little prepared for this misfortune. The things she saw during her life were unbelievable. She had a good life. Again, Know that my thoughts are with you, and I wish you the best.
Roy Ison
July 20, 2021
We were so saddened to hear of Dawn's passing. Another bright star gone to shine elsewhere. I have so many fond memories of her; that sweet smile; wicked sense of humor and the way she raised her wonderful, brilliant children. We were truly blessed to know her!
Sherry Reynolds & Marjorie Hanks
Friend
July 19, 2021
I am so sorry for the loss of your beautiful mother. Although I never got to know her well, my mother Bunny (Gardner) Millstid always spoke so very highly of Aunt Dawn. Aunt Dawn would call her once a year to check in with her, and once Facebook became popular we would all keep in touch there. So many times we spoke of all having lunch, sadly it just never happened and I am so sorry I never got to spend that time with her and find out more about her life. My mother Bunny passed in April 2020, and I know she welcomed Aunt Dawn with open arms. Hopefully they are both pain free and sharing lots of laughs together. Dawn sounded like such a beautiful and amazing person. My prayers are with all of her loved ones left behind. Rest peacefully.
April De La Cruz
Other
July 19, 2021
May God bless you and your family in this time of sorrow.
William Bothe
Family
July 18, 2021
My sincere condolences to the family of Dawn Garms. I worked with Dawn at Fort Sam Houston in the pay section. Her smile and her eyes sparkled when she would tell us stories when traveling with her small children by plane. Dawn was one of a kind. She had a beautiful personality. May she Rest In Peace.
Helen Cervantes
Work
July 18, 2021
My sincere sympathy to the family of Dawn. May you find peace and understanding at this difficult time. Knowing Walter and Dawn for many years and thought so highly of them. May she rest in peace. My love and prayers to Trish and her family. Betty Ludwig
Betty Heberer Ludwig
School
July 18, 2021
Showing 1 - 10 of 10 results