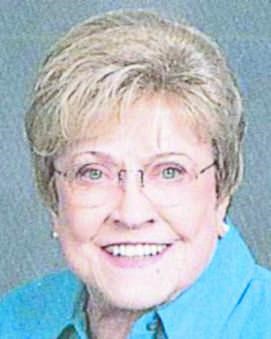 FUNERAL HOME
Porter Loring Mortuary North
2102 N. Loop 1604 E.
San Antonio, TX
November 27, 1923 - September 10, 2015
Mary Frances Kramer, age 91, passed away on Thursday, September 10, 2015 in San Antonio, Texas. Mary was born on November 27, 1923 in Luling, Texas to William and Annie Woodard. She was one of the founding members of St. Francis of Assisi Catholic Church and served on the Women's Council, Society of The Rosary and the Silver Stars. Mary was also a member of St. Mary's University Junior Guild and the Sultanas de Bejar for many years. Mary enjoyed spending time with her dog, Misty and working jigsaw puzzles. She was a loving wife and mother. She was the joy of her family's life and will be greatly missed. Mary is preceded in death by her parents; husband, John "Jack" F. Kramer and son, William J. Kramer. She is survived by her daughter, Kathy Pfeiffer and husband, Warren; son, James F. Kramer and wife, Darlene; daughter-in-law, Belinda Siegel; 7 grandchildren, Trey, John, Laura, Sean, Ryan, Ansley and Mary Frances; 9 great grandchildren, Jacquie, Brittany, Emily, Braden, P.J., Jacob, Will, Luke and Beau. MASS, TUESDAY, SEPTEMBER 15, 2015, 10:00 A.M., ST. FRANCIS OF ASSISI CATHOLIC CHURCH, 4201 DE ZAVALA RD., Entombment will follow in Holy Cross Cemetery. You are invited to sign the Guestbook at www.porterloring.com.

Published by San Antonio Express-News on Sep. 13, 2015.
To plant trees in memory, please visit the Sympathy Store.
MEMORIAL EVENTS
To offer your sympathy during this difficult time, you can now have memorial trees planted in a National Forest in memory of your loved one.
Funeral services provided by:
Porter Loring Mortuary North
MAKE A DONATION
MEMORIES & CONDOLENCES
3 Entries
Prayers and fond memories of her are what I have to remember Mary. May the love of family and friends comfort you all during these difficult days. My thoughts and prayers are with the Kramer family but especially Sean Kramer and Ryan Kramer and their families. My deepest condolences.
Jane Prinz
September 16, 2015
Our thoughts and prayers are with you.
Mary smile and kindness were an inspiration to the entire family.
She will be deeply missed by all.
Glen Pfeiffer
September 13, 2015
You will surely miss her so much but may your special memories comfort you.
Cathy Ward
September 12, 2015
Showing 1 - 3 of 3 results