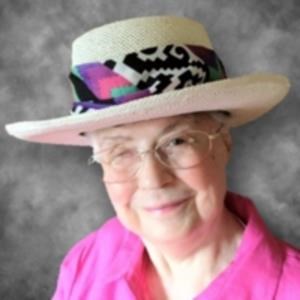 Mary Elizabeth Kicklighter Wray, daughter of Marvin and Maggie Mae (Driggers) Kicklighter, took her last breath at her Fair Oaks Ranch home early on Monday September 6, her children at her side. She was the last of her Kicklighter brothers and sisters to join the choir of heavenly angels. Surely the pouring rain later that day represented the heavens erupting with tears of joy at the reunion of family and friends who passed before her, mingling with the tears of grief and gratitude shed by those left behind.

Mary was born in Glennville, Georgia November 15, 1925, with her identical twin Martha, growing up with pecan trees, gardenias, peas and cornbread, and much love. The twins loved to dress the same and pretend to be each other on occasion (even on dates, much to the chagrin of their dates). Mary left home for two years at the Georgia State College for Women in Milledgeville, then moved to Augusta to work in a millinery shop, the first of many places our mother wore the hats she became famous for throughout her life. In February 1949, she attended a dance at Fort Gordon with one young officer and then danced the night away with another young officer who literally swept her off her feet.

That encounter fueled a love story that lasted decades. Lieutenant William (Bill) Wray and Mary Kicklighter were married In October 1949, raised their children (Linda, Robert, and Steven), changed assignments and homes, travelled the world, and settled in the Hill Country in 1982 near dear friends John (best man at their wedding) and Jane Perkins following Bill's retirement from the US Army as a Major General and Deputy Chief of Engineers. In the following 40 years, Mary joined Bill, the Perkinses, and families at Los Barrios Mexican Restaurant almost every Saturday night. After they settled into their new home, The Boerne Star wrote that Mary and Bill "volunteered to retire and retired to volunteer," roles they took seriously and joyfully. Mary was a regular volunteer for the Hill Country Family Services thrift shop, which she later ran, and served faithfully at the First United Methodist Church of Boerne in various capacities.

Mary Wray will be lovingly remembered by so many whose lives she touched along her earthly journey, and especially by her children and grandchildren—Linda (and Duane), Robert (and Kathy), Steven, Danielle (Kelly, Hunter, and great granddaughter Sage), Emily, and Chris—along with many nieces, nephews, adopted and extended family, dear friends, and community. She will be laid to rest with Bill at Fort Sam Houston on Monday September 27, and her life celebrated in 2022. The family thanks Home Instead, mmCare, and Four Seasons Hospice for their devoted care. In lieu of flowers, the family appreciates donations in Mary's name to the First United Methodist Church of Boerne, Hill Country Family Services, Morningside Ministries, or a charity of your choice.

Published by Express-News on Sep. 19, 2021.
To plant trees in memory, please visit the Sympathy Store.
MEMORIAL EVENTS
To offer your sympathy during this difficult time, you can now have memorial trees planted in a National Forest in memory of your loved one.
Funeral services provided by:
Holt & Holt Funeral Home
MAKE A DONATION
Please consider a donation as requested by the family.
MEMORIES & CONDOLENCES
Sponsored by Holt & Holt Funeral Home.
0 Entries
Be the first to post a memory or condolences.