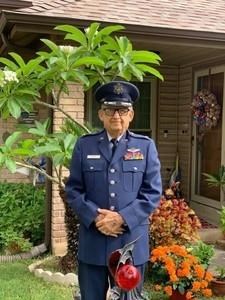 Colonel Morton (Jake) R. Jacobs Ret, USAF, age, 90, passed away quietly at home on October 30, 2021. He was surrounded by his family and loved ones. Jake was born in Brooklyn New York on September 30, 1931, the oldest child of Nathan and Sadie Jacobs. He is proceeded in death by his parents Nathan and Sadie Jacobs and his wife, Steinunn S Jacobs (2014).

Jake joined the USAF as an officer to become a pilot in 1952. He soon realized that being a pilot was not what he wanted to do so he became a navigator instead. He once proudly said, "You know, the technology back in the 50's and 60's was not what it is today, so once we left the US and we were out over the ocean, I then became the most important person on the plane". He spent 30 years in the Air Force traveling all over the world with his family before retiring from Randolph AFB as a Colonel in 1982. After retiring Jake became a Home Inspector, graduating from the first State of Texas licensing class for Home Inspectors. He held License #11 an accomplishment he was very proud of and retired from that after 20+ years. Jake was an active Free Mason and a member of the Randolph Lodge #1268. He held 32nd degree Scottish Rite. He was an active member of the Alzafar Shrine, NEMNUF, Sojourner's, Rod & Gun Club and RV Club. He loved being a clown.

In lieu of flowers please donate, in Morton Jacobs' name, to the Shriners Hospitals for Children. Donations can be made by phone, 844-739-0849 or donate by sending a check to: