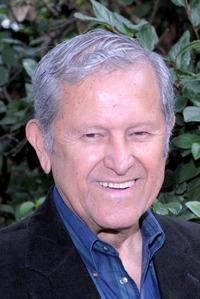 Dr. Rene F. Cardenas, a Korean War veteran with a distinguished career in international development, died November 13, 2021, in Wimberley, Texas. He had suffered from long-term complications of surgery performed in 2017 for an aortal aneurysm.

Rene Cardenas grew up in San Antonio, where he was born March 30, 1933. He was an honorable man, brave and caring, committed to serving his nation and protecting his family and others. Throughout his life he worked to improve the welfare of people in this country and abroad.

He balanced duty with creativity, often furrowing his brow while composing the lines of a poem or outlining a short story, sometimes stopping to jot notes on the back of an envelope or napkin. To the end, he delighted in making people laugh.

As a child, he sold peanuts for his dad in the San Antonio Market Square, where he was kept under a sharp eye after once losing the peanuts down the gutter. He developed the habit when he was in elementary school of stopping at a café for coffee and pie on the way home from school, not realizing he was supposed to pay for it.

Of his many accomplishments, he was most proud of his service in the U.S. Army Airborne and Second Infantry Division, 9th (Manchu) Regiment in Korea, 1951-1953, for which he was awarded a Bronze Star for Valor.

While in the Army, he was assigned to test parachutes at Fort Benning, Ga. For the rest of his life he said he was never as scared as when he had to land in a plane since he had always jumped out before landing. He developed his taste for tea with cream from the British soldiers who served with him in Korea.

Later, he picked peaches in Colorado, worked as an orderly at Parkland Hospital in Dallas, as a private investigator in California, and as a cartographic aide at the U.S. Geological Survey.

Rene was among the first Peace Corps Volunteers, serving in Peace Corps 2 in Colombia. His Peace Corps buddies remember him as a leader who energized meetings with his ideas for village programs and who rappelled off a cliff during training yelling "Geronimo," a throw-back to his paratrooper days.

He went on from his time in the Peace Corps to have a distinguished career in international development and research, working for Save the Children in Mexico and British Guiana, where he insisted the national dish was Texas BBQ.

In Arizona, he worked for VISTA and the Migrant Opportunity Program.

He was a proud Longhorn. He was in the library during the Tower shooting at the University of Texas in 1966 and immediately jumped into action signaling pedestrians to move away from the danger area. In addition to sky diving, he enjoyed spelunking with friends, which is where he developed his love of the Hill Country where he ultimately settled.

After graduating from UT, he was named a Ford Foundation Fellow and earned his doctorate of education (Ed.D.) in community development at Teachers College, Columbia University, despite his mischievous ways—on his comprehensive exam, he turned in a blank sheet of paper as a philosophical statement.

He worked as a senior advisor at the newly created Department of Health, Education and Welfare Fund for the Improvement of Post-Secondary Education, which led the transformation of higher education in this country, strengthening access for people previously unable to obtain a college education.

In that position, he collaborated with labor and civil rights leaders Cesar Chavez and Dolores Huerta on programs for the United Farm Workers, helped establish the Association for Community-Based Education, and funded the Federation of Southern Cooperatives in Alabama. In that capacity, he visited Cuba ostensibly to study the educational system, and sampled peyote on a mountain top with a famous movie star.

Many young people he knew over the years describe him as a beloved mentor who stressed that discipline is "doing what you have to do, when you have to do it, whether you want to or not."

As Senior Vice President at Development Associates, he directed a landmark policy study of bilingual education and led the field work of the Hispanic Health and Nutrition Examination Study (HANES) in partnership with Westat Corporation. Among the challenges he experienced was dealing with romances among the field data collectors on a mobile team that traveled the U.S. for several years, and protecting himself and his team in dangerous neighborhoods.

Before retiring, he served as Senior Vice President of the National Council of La Raza (NCLR), where he worked to reframe the image of Hispanics as achievers, not victims.

After his retirement, he turned to his greatest love, writing. He wrote and published hundreds of poems and short stories, as well as a three-volume science fiction novel called Mimosa Suite about a pandemic that wiped out the U.S. The main characters bear the names of his pets.

He will be remembered for his encyclopedic knowledge of movies, his political acumen, his warmth and generosity as well as his quirky sense of humor.

Elaine's first thought when she and Rene committed to each other was, "How did I get so lucky?" In later years, Rene would sometimes refer to her as "my little friend," with a twinkle in his eye, recalling a restaurant hostess who called her that after giving him a wink years earlier.

They enjoyed many adventures together: hot-air ballooning in California, scuba diving, deep sea fishing and snorkeling in the Caribbean, and trekking to Baltimore's Fells Point for tattoos. They also enjoyed traveling together throughout the U.S. and Europe and to Uganda and India.

Rene was overjoyed when reunited with his daughter after 30 years. He could not contain his happiness nor his impatience while waiting to see her, agonizing over how to express his love and earn her respect.

One of his nieces remembered how he used to dance along in the car to her hip-hop music while driving her to school and recalls how thrilled she was to receive postcards from a "secret admirer" sent from all over the world, which bolstered her self-esteem at an important time in her life.

She also laughed at how he chaperoned her on her first date to a local Italian restaurant for dinner and took her shopping for her first pair of high heels.

He adored his dogs—Popo, Rosie, Xuxa and Boris, and surreptitiously slipped them slices of bacon under the table when Elaine wasn't looking.

He was much loved, and "a character unlike anyone else you are likely to meet," his sister-in-law said. His granddaughter described him as a cat—independent and inscrutable.

He had a reverence for the Alamo where he played as a child. He joked that when he died, he wanted his ashes scattered all around the Alamo so that the Alamo would be surrounded by Mexicans.

There will be a memorial service in San Antonio, Texas, Friday, December 10, 2022, at noon. Family and friends are invited to attend. In lieu of flowers, the family suggests the donation of a plant to his garden. For more information, please contact

Published by Express-News on Nov. 28, 2021.
To plant trees in memory, please visit the Sympathy Store.
MEMORIAL EVENTS
To offer your sympathy during this difficult time, you can now have memorial trees planted in a National Forest in memory of your loved one.
MAKE A DONATION
MEMORIES & CONDOLENCES
3 Entries
On behalf of the Peace Corps community, our most sincere condolences to Rene's family and friends for your tragic loss. I am grateful for Rene's service to his country as a Peace Corps Volunteer in Colombia, and know that he positively impacted many people in his lifetime of service to others. Glenn Blumhorst President & CEO of National Peace Corps Association
Glenn Blumhorst
Other
December 2, 2021
I met primo Cardenas once at a family wedding. I remember he was very jovial, full of life and smiles, and he gave me his business card. I remember thinking that it was impressive that he had a doctorate. I had never met a relative who had a doctorate before. Thank you for paving the way in many ways primo. It´s a Cardenas thing. Until we meet again, Dr. Wei
Christina Cardenas Wei
Family
November 30, 2021
RIP Renee.
Frank Titus
November 28, 2021
Showing 1 - 3 of 3 results