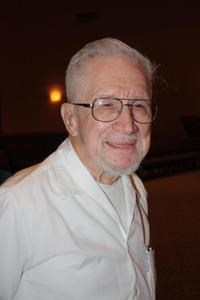 On August 23, 2021, Robert (Bob) Ellsworth Greene answered his final roll call as he heard the bugle sound reveille at 0630 hours.

He jokingly commented that on the day he was called to his eternal home, he would be one Army grunt replacing a squad of Marines at St. Peter's Gate. He was a few days short of being 97-years-old.

Over the almost ten decades that Bob roamed this earth, he enjoyed reading, telling jokes, sharing the history that he lived, relaying his military experiences, studying words, easily making new friends, complimenting people for jobs well done, helping those whom he knew were in need, watching Science-Fiction movies and television series, and often being mischievous and playful in interactions with those around him. He might even have named a lizard Alowishus Peabody Jr., had an imaginary dog named Duke, enjoyed Snoopy's adventures as the Red Baron, and learned from Snoopy's brother, Spike, to take joy in the little things.

Greene called Jersey Shore, Pennsylvania, home for many years. He was the oldest of seven siblings. Although he had varying jobs throughout his younger years, he was a soldier and a government employee for most of his working life.

He was sworn into the Army on February 15, 1943. He served as a Machine Gunner with an Infantry Rifle Company. He was assigned to K-Company, 104th Infantry Regiment, 26th Infantry (Yankee) Division, 3rd Army. His Combat Infantry Badges and Medals include a Bronze Star, a Good Conduct Medal, an American Theater Medal, a European-African-Middle Eastern Medal with two Campaign Stars, and a WWII Victory Medal received for Combat Action.

After he retired from the service on November 30, 1965, he left the mountains, the snow, and his rural upbringing to plant roots in the growing city of San Antonio, Texas. He became a civil servant working on a Letter Sorting Machine for the United States Postal Service until he retired in October 1990.

Visitation will be held on Tuesday, September 14th from 10:30-12:30 pm with burial to follow at Fort Sam Houston National Cemetery at 1:00 pm. Condolences may be offered at www.sunsetfuneralhomesa.com.