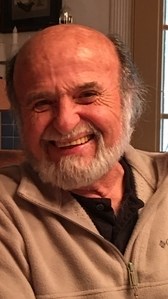 Robert Roger Najera entered the loving arms of The Creator on July 2, 2021, at the age of 76 years old. Roger, as he is fondly called by most, was born in San Antonio, TX on July 30, 1944, to Lydia Uveda Najera and Arthur Najera.

Roger entered the United States Navy on July 13, 1962, at the age of 18. He served four years before being honorable discharged July 29, 1965. He returned to San Antonio to marry Rosabella Saldana on Jan 21, 1968. The couple moved to Irvine, TX where Roger worked at Bell Helicopter and where they had a son, Patrick. The family again returned to San Antonio where Roger was employed at KSAT television channel 12 as an electrical engineer and cameraman before moving on to Audie L. Murphy VA Medical Center, where his video sessions became an invaluable aid to the psychology department and for which he received scientific and technical honors. During this time the family was blessed with a second child, daughter Rebecca. In 1973 he enrolled at Texas State University and graduated with a BA in Arts and Sciences in 1977. After completing his degree he was employed in Government Service at Lackland Air Force Base Television Production with Combat Camera and as a Producer/ Director until his retirement in September 1994. Roger had a passion for boxing and became a Golden Gloves official. He received his FCC license in 1985 and also worked with the Texas Cavaliers on the Fiesta River Parades for many years.

Roger will be reunited with God and with his first wife, Rosabella, his parents, Arthur and Lydia Najera; brother, Tony Najera; sisters, Lorraine Deleon-Can, and Mary Lemon; and his beloved aunt and uncle, Rebecca and Rosario Ramirez.

Roger was extraordinary. His work ethic was impeccable. He was kind, humorous, generous, honest, and embodied all the qualities of what one would call a stellar man. He led two full and beautiful lives with his past wife and current wife Kim L. Egly and embraced Alexander Wolfe as his third son bringing together a phenomenally fierce and caring family with bonds that will never be broken. He coined a saying early in his second marriage, "We must have calm seas" so that whomever came through our doors knew they were safe, loved, and accepted. Roger was called "Papa Bear", Dad, Daddy and Grandpa by many not even related to him. Most people who met Roger saw and felt that special light within him. We all feel truly blessed to have shared our lives with this very beloved person. We cannot wait to be with you again.