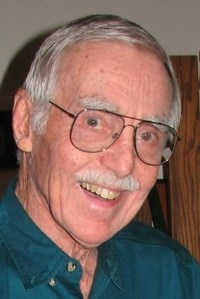 Bobby grew up in Alamo Heights and graduated Class President of AHHS in 1949. Model Airplanes and Soap Box racing during childhood led Bobby into an engineering career in the Aerospace industry.

After graduating from AHHS, he earned two Bachelor's degrees from Rice and a Master's from SMU in Electrical Engineering. He practiced mechanical engineering during more than 40 years in Aerospace. In that time, he helped usher in jet transport, control supersonic flight, placed man on the moon, and develop the Minuteman missile and the Apollo and Viking spacecraft. In 1981 he retired from E-Systems in Salt Lake City and joined Dowty Aerospace in Yakima, WA as VP of Marketing and Engineering until retiring at age 62. Upon retirement, the family moved to San Antonio, where Bobby reunited with his AHHS classmates and participated in their 50th, 55th, 60th, 65th and 70th high school class reunions!

His family life was equally active, having raised four children from his first marriage, followed by two more children with his beloved wife, Betty. Bob spent his leisure time hunting, hiking, boating, fishing, and sharing his love of the outdoors with his children and many other youth through the Texas Youth Hunting Program. In addition, Bob wrote three books about hunting, as well as numerous outdoor magazine articles. Robert believed in conservation efforts and was a member of NWTF, RMEF, Texas Wildlife Association, Texas Outdoor Writers Association, and Texas Bighorn Society.

A very important part of Robert's life was "walk the talk" of the Bible by serving others as Jesus did. In his own words, "Worship, prayer and church involvement brought strength, joy and meaning to my life."

In the past, this included teaching Sunday School to children, participating in VBS (voted best Moses ever!), and completing Bible Study Fellowship.

A Celebration of Life service will be held on September 17th at 1:30 p.m. at University United Methodist Church, 5084 De Zavala Road, San Antonio, TX 78249 with a reception following at the church.

If attending service, please wear a mask in consideration of others.

Published by Express-News on Sep. 12, 2021.
To plant trees in memory, please visit our Sympathy Store.
MEMORIAL EVENTS
Sep
17
Celebration of Life
1:30p.m.
University United Methodist Church,
5084 De Zavala Road, San Antonio, TX
MAKE A DONATION
Please consider a donation as requested by the family.
MEMORIES & CONDOLENCES
1 Entry
Betty and Family, Our thoughts and prayers are with you at this time. Blessings, Barbara and Carl Scheib
Barbara A Scheib
September 13, 2021
Showing 1 - 1 of 1 results