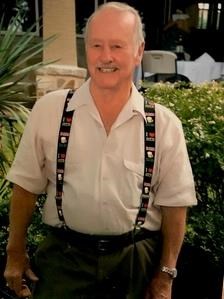 On September 4, 2021 Tommy Fuller went to be with the Lord. He passed away peacefully surrounded by his loving family.

Tommy was born on August 7, 1932 in Bronson, Texas to Joe and Ruth Fuller. At the age of 6 he moved with his family to San Antonio. He spent his childhood there and in 1950 he graduated from Alamo Heights High School. Tommy then went on to attend Sull Ross State University and later decided to join the Navy. He was medically discharged from the Navy while training in San Diego.

Tommy married the "love of his life", Bonnie Jeffrey, in 1952and in 1953 they moved to Rosevine, Texas to work the family dairy farm with his father. They eventually returned to San Antonio where Tommy began his career in the tile business. He worked hard to learn the trade and he started Fuller Tile Co. in 1965. He made lifelong friends in the tile business.

Tommy and Bonnie were blessed with 4 beautiful children: Rusty, Kenny, Keith and Cindy. Family time was spent camping, coaching his kids and playing sports. Tommy also had a passion for country music which he shared with his family. He was always serenading them.

Tommy enjoyed hunting in the Rocky Mountains of Colorado but his favorite place to hunt was in Cuero, Texas. Many weekends were spent there sitting around the campfire with his family.

Tommy never met a stranger and was loved by all who knew him. He had the ability to make everyone feel special. He had a sense of humor and wit about him that always kept us laughing.

His deepest and most cherished love was for his family. He leaves behind his wife Bonnie of 69 years, 4 children Rusty (Shoshana), Kenny (Cindy), Keith (Donna), Cindy (Joey), 15 grandchildren and 35 great grandchildren.

He was preceded in death by his father Joe, mother Ruth, sister Ramona, brother Keith and grandson Kyle.

The family would like to thank Heart of Texas Hospice; Rose and his beloved caregiver Danielle.

We were so blessed that God gave us a beautiful day with him before he passed.

In lieu of flowers, donations can be made to Schreiner Childers Hospital, MD Anderson Center (mdanderson.org/falldonation22, or St. Jude Children's Research Hospital.

Published by Express-News on Sep. 11, 2021.
To plant trees in memory, please visit the Sympathy Store.
MEMORIAL EVENTS
Sep
13
Visitation
10:00a.m.
Concordia Lutheran church
TX
Sep
13
Memorial service
11:00a.m.
Concordia Lutheran church
16801 huebner road, SATX, TX
MAKE A DONATION
Please consider a donation as requested by the family.
MEMORIES & CONDOLENCES
6 Entries
My heartfelt condolences to the Fuller family. When I was in college Mr. and Mrs Fuller were like a second family to me. I will always be grateful for that. God bless a good man and a good family.
Rusty Russell
Friend
September 22, 2021
Dear Tommy Fuller Family, You couldn't find a finer friend than Tommy. I loved the guy. My deepest condolences to you all.
Charlie Whipple
September 14, 2021
My condolences to the Fuller family. Mr. Fuller aka "Pops" was a kind hearted man I met as a kid back in the Raindrop days. He was always funny and entertained us along with his beer drinkin' dog named "Suds". Great memories, thank you for sharing him with us neighborhood kids. Prayers for Bonnie and the kids
Buz Lamoureux
Friend
September 13, 2021
In loving memory of a wonderful person. We will love you and miss you always. Our sincere condolences to family and friends in the loss of Tommy. He always made us laugh. Wonderful man..
Roger and Denise Avants
Work
September 11, 2021
In the early 70's, Tommy Fuller was one of my several "second fathers", at a time in my life when I needed that. Great man, great father, great sense of humor. Tommy always made me laugh even when he wanted to kick my butt, and me knowing there weren't many men of any size whose butts he couldn't kick. God Speed Tommy, and R.I.P! I love you. Many wonderful memories, and Prayers for Bonnie and Keith, and Lil Cindy and Kenny, and Rusty, and all their's.
Tim Smith
September 11, 2021
A Good Man........Rest in Peace.
The Brooks Family
September 11, 2021
Showing 1 - 6 of 6 results