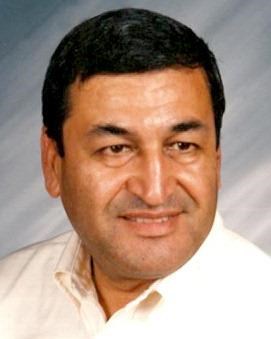 Victor enjoyed travelling to see friends and family; his farewell quote typically was "second star to the right and straight on till morning."

The family will receive friends Monday, May 21st beginning at 5:00 pm in The Angelus Funeral Home Chapel with a Celebration of Life to begin at 7:00 pm.

Funeral mass will be offered on Tuesday, May 22nd at 9:00 am at Holy Spirit Catholic Church, 8134 Blanco Rd. Burial will follow at Fort Sam Houston National Cemetery, 1520 Harry Wurzbach Rd. with military honors. Condolences may be sent at www.theangelusfuneralhome.
com Arrangements by:

Published by San Antonio Express-News on May 20, 2018.
To plant trees in memory, please visit the Sympathy Store.
MEMORIAL EVENTS
May
21
Visitation
5:00p.m. - 7:00p.m.
ANGELUS FUNERAL HOME
1119 N SAINT MARYS Street, San Antonio, TX
May
21
Celebration of Life
7:00p.m.
ANGELUS FUNERAL HOME
1119 N SAINT MARYS Street, San Antonio, TX
May
22
Funeral Mass
9:00a.m.
Holy Spirit Catholic Church
8134 Blanco Rd , TX
May
22
Burial
Fort Sam Houston National Cemetery
1520 Harry Wurzbach Rd, TX
Funeral services provided by:
ANGELUS FUNERAL HOME
MAKE A DONATION
MEMORIES & CONDOLENCES
Sponsored by ANGELUS FUNERAL HOME.
11 Entries
I did not known of Vic's passing.
He was a good friend and man of integrity.
Janet and I send our best to Mary and children.
John Petrosky Kerrville Tx
December 31, 2018
My deepest sympathy to Mary, his daughters and extended family. Victor was a wonderful friend and colleague, a caring teacher, and fine role model for his students. Like others, I treasure the legacy he left my family of beautiful photos of me and my children. What a gift! Thank you Victor!
Mary Jackson
May 25, 2018
My sympathies to Victor's family. I have included him in my night prayers. God bless Victor.
Carlos Esparza, HC '62, St. Mary's '66
Carlos Esparza
May 21, 2018
Mr. Resendez was a great teacher, and a gentle-man. I had the pleasure of learning from him at Holy Cross, and will always be grateful for the fine example he gave to me, and other young men, as we grew up to take our place in the world. Thank you for all the good that you did while you were here on Earth. I am certain God will be most happy to receive your soul. Rest in peace, Mr. Resendez!
Mark Muller
Student
May 21, 2018
My sympathies to the family. God bless
Victor was a fine man it was an honor to know him .
Sincerely

John Barrientes & Family
May 20, 2018
With all my sympathy to family and friends. What a math wizard, A good man! John Lugo
May 20, 2018
Victor will be love and missed greatly. I'm going to miss him. When I think of Victor I think of all the pictures he took. He is family to us. I will miss his visits and seeing him at our family reunions. I don't know of a more smarter person. He loved his family and friends so much. He always had so much to share about his grandchildren.
rebekah bouley
May 19, 2018
From the moment Dido and I met Victor he was an instant friend. At our first meeting, we felt compelled to invite him to our wedding. To our delight, he showed up and took numerous pictures of the rehearsal dinner and wedding to supplement our photographers photos. We had to make a special album which is now a treasure trove. From that moment on he was family to us. He had a quiet way about him, but was also quite the engaging conversationalist. Our son Nate recalled how he loved talking to Victor about Physics and the mysteries of the universe! You will be deeply missed. Lisa, Dido, Nate and Meredith
Lisa Galang
Friend
May 18, 2018
Victor was a true friend. Once you became a friend of Victor's, he made time to keep in touch.
Many trips from SA to Houston over the last 23 years, since we moved away, to come see me and Sarah.
We loved everyone of those visits.
We will miss him, but he is "feeling good again" in Heaven, and that makes me happy!!
Rick Faught
Friend
May 18, 2018
Victor was not only a friend he was like family, will miss him at our family reunions & family gatherings RIP VICTOR
lois howard
Friend
May 18, 2018
I was so blessed to have known Victor Resendez, he was my mentor, friend and brother. I will keep you in my memory always.
Sarah Faught
Friend
May 18, 2018
Showing 1 - 11 of 11 results