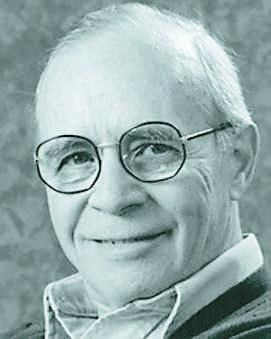 September 6, 2017
The charmer Wayne Kearl died peacefully in his own bed in Austin TX on September 6th, 2017. He was 7 weeks shy of his 99th birthday.
He was born in Cardston, Alberta and left for the US to pursue an education in journalism. This later evolved into the broadcasting business, first in radio, then TV. He moved to San Antonio in 1955 to become General Manager of KENS TV, eventually retiring in 1981 as Vice-President of Broadcasting of the Harte-Hanks Corporation
He and his wife Dorothy shared a passion for classical music and they reveled in hearing extraordinary performers by traveling the world until Dorothy died in1992 after 50 years of marriage. After she died, his sorrow transformed into writing poetry at which he was gifted. He published 4 volumes of poetry to the delight of his friends.
He is survived by a sister, Norma Pilling, and brother Jack Kearl, both in Cardston. Also by son Stan (and wife Biruta) of Austin, possibly by Ted of Chicago (and former wife Kathryn), and by Robert (and wife Tina) of Costa Rica and Austin. His only grandchild, Zoe, has also become a gifted poet.
His full, rich, and long life will be celebrated by a remembrance at 4pm on Sunday, September 17 at Stan and Biruta's house. Please email [email protected] for more details.

Published by San Antonio Express-News on Sep. 14, 2017.
To plant trees in memory, please visit the Sympathy Store.
MEMORIAL EVENTS
Sep
17
Memorial service
4:00p.m.
Stan and Biruta's house
TX
MAKE A DONATION
MEMORIES & CONDOLENCES
1 Entry
AMID THE SORROW, MAY I ADD A HAPPY NOTE-- MY MEMORY OF DANCING WITH WAYNE 40 YEARS AGO...HE WAS A PRO!
BLESSINGS ON YOU AND YOUR FAMILY.
CLAIRE CARTER
SAN ANTONIO TX
September 16, 2017
Showing 1 - 1 of 1 results