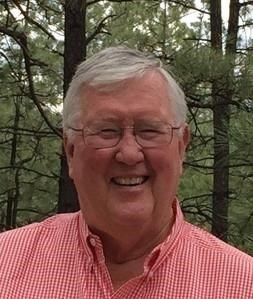 William Basil Hudson, 80, lost his battle to cancer on November 17th, 2021. Raised in Midland Texas, Bill later settled in San Antonio and retired to his ranch outside of Boerne.

He was preceded in death by his wife, Barbara Hudson, and is survived by his three sons, Blake Morris (wife Christine), Michael Morris (wife Danna), Will Hudson (partner Michelle), and his older brother Bob Hudson. Bill was blessed with six grandchildren: Nathaniel, Quentin, Rebecca, Hugh, Liam, and Everett. Bill is also survived by his loving partner for the last seven years, Barbara Finch. His extended family and friends deeply mourn his passing, but also celebrate the many extraordinary years we shared with him.

Bill was a unique individual. He was an exceptionally talented and successful businessman, having become president of Alamo National Bank in San Antonio at the age of 36 and then going on to lead many successful business ventures and partnerships. His career began with Chase Manhattan in New York, which he often remembered fondly as "the best training program a banker could get." He then continued to expand his education and knowledge at the Thunderbird School of Global Management in Phoenix and later a graduate degree in Banking from SMU, evidencing his life-long emphasis on education and exploration of thought. After serving in many roles at the Bank of the Southwest in Houston, he assumed the top leadership position at Alamo National Bank in San Antonio, which he led for many successful years before deciding to entertain more entrepreneurial interests with his friends. There were many peaks and valleys during his restaurant years, as there always are starting new businesses, but he enjoyed them all and always managed to come out ahead. Even so, in his heart he was always a banker and so he returned to banking. He led a string of small regional banks which took him to El Paso, then back to San Antonio, where he eventually capped off his career brokering the sale of banks, doing deals with his friends and appreciating life. He often called this part of his career "the most fun I've ever had."

While Bill's intelligence and insights into business dealings were impressive, and certainly important to him, they were perhaps the least significant aspects of who Bill was. His remarkable intellect led him into a lifelong inspection of life, friendship, spirituality, and politics. This was fertile ground for deep friendships based on shared understandings and mutual respect that went far beyond business deals and led to enduring relationships. From his Midland High friends to his University of Texas friends to the friends he met during the various phases of his life, they all stuck around for the stimulating conversations, warm hospitality, and inclusive "the more the merrier" good times that always seemed to surround Bill.

Bill enjoyed traveling to visit and explore other cultures and sites, from time spent visiting the Mexican border in the seventies to trips with family to Yellowstone and many family gatherings in Colorado, Costa Rica, and of course his ranch in Boerne The time was always about enjoying life and sharing it with family and friends.

After retirement, he and his wife even spent a "senior year abroad" where they did an immersion study in French before living for a year in Provence, enjoying the French culture. Later he continued his travels to see and experience the Baltic Sea, British Virgin Islands, and many venues in Europe. Through all of this Bill was always experiencing and learning from life and pointing all of us to the things we should be most concerned with: people.

Bill deeply cared for his children, grandchildren, and partners. One of the most unique things about Bill was his ethic of inclusion. To Bill life was always better with more: more laughter, more love, more people to share in it all. There were no distinctions to Bill between step-sons and son, wife and partner, extended families and close family – they were all welcome all the time to take part and enjoy life together. This amazing fellowship has left us all with a legacy of love of life that we will continue to treasure together for the rest of our lives. This is perhaps the greatest gift that Bill has left to us and one for which we can never express enough gratitude. We can only honor this legacy by continuing to pass it along and spread the love as far and wide as we can, knowing that's how Bill would have loved it.

In the spirit of honoring this monumental man, we invite you all to come celebrate his life with us together at the Alamo Heights United Methodist Church at 11am on Thursday, December 2nd. Let us come together and pray, celebrate, laugh, love, and remember Bill Hudson as he would have wanted us to: with light and laughter and love for each other in our hearts.

In lieu of flowers, and to honor Bill's spirit of philanthropy and generosity, the family asks that donations in Bill's name be made to the following charities:

Or any charity of your choice.

Published by Express-News on Nov. 28, 2021.
To plant trees in memory, please visit the Sympathy Store.
MEMORIAL EVENTS
Dec
2
Celebration of Life
11:00a.m.
Alamo Heights United Methodist Church
TX
MAKE A DONATION
Please consider a donation as requested by the family.
MEMORIES & CONDOLENCES
11 Entries
Bill was one of the finest individuals I have ever met. I´ll miss our phone conversations about the stock market and things in general. He was always a joy to be around. My deepest sympathies to the Hudson Family!
Bill Chapman
Friend
December 6, 2021
Bill was a man who loved life and people, and to each of us, he touched our hearts and brought kindness to the world. He will be dearly missed.
Noelle Manasco
Friend
December 2, 2021
I met met Mr. Hudson when I was around 9-10 years old, and I can´t recall a single memory when he was not smiling. Later in life, when I was applying to Thunderbird business school, Mr. Hudson not only offered me great advice and guidance, but took the time to write me a glowing recommendation. I am always grateful for that effort, for treasured childhood memories and for the kindness I equate to him. Thank you, Mr. Hudson.
Kacy Cole
December 1, 2021
I met Mr. Hudson when I was around 9-10 years old and I can´t recall a memory of him where he was not smiling. He also played a critical role later in life when I applied to Thunderbird for business school and he not only gave me great advice and guidance, but wrote a truly glowing recommendation. I will always be grateful for that effort, for wonderful wonderful childhood memories and the kindness I always equate him. Thank you, Mr. Hudson.
Kacy Cole
December 1, 2021
What a loss for all of us! Uncle Bill was always fun to be around, and had such a spark of joy. We are so appreciative of his warm embrace of Kate when she moved to Texas to attend Baylor. Cancer is such a terrible disease. Jim and I have decided to donate to the Canary Foundation, a nonprofit dedicated to the early detection of cancer.
Liz and Jim Campbell
Family
December 1, 2021
Bill and Barbara Hudson were two of the most incredible people. They were always welcoming, always loving, and always fun to be with. I will miss what a good friend Bill was to my dad and how kind he was to my husband when he first moved to town after college. Bill will be missed.
Katherine LeFlore Smelko
December 1, 2021
So grateful to have known him, loved him and been loved by him. Bud and Ramona
Fred Fischer and Ramona Verrico
Family
November 29, 2021
We will will always remember Bill for his warm hospitality the times we spent at his ranch in Boerne. He had a way of making people feel welcome.
Steve and Elaine Finch
Friend
November 28, 2021
One of the nicest, and most honest people I ever met. We'll all miss ya Hud, love ya!
Brownie
Friend
November 28, 2021
Although we only met Bill on four occasions, we will never forget his warm friendliness, his love of life and a way of just making you feel like a good friend! He will be missed by all that had the pleasure of knowing him. Our condolences to his family and our friend Barbara Finch.
Pam and John Carter
Friend
November 28, 2021
We Love You Bill. Rest In Peace
Dina and Norb Cole
Friend
November 28, 2021
Showing 1 - 11 of 11 results