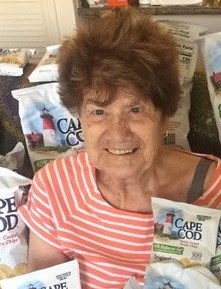 BORN
1930
DIED
2021
Ann Dumanis
July 16, 1930 - February 12, 2021
San Diego
Ann Dumanis, 90, mother of former District Attorney Bonnie Dumanis, died peacefully in her home on Feb. 12, surrounded by Bonnie, her daughter-in-law Denise Nelesen and extended family member Judy Copeland. Ann was born in Bronx, NY, and lived most of her life in Brockton, Mass., where she and her husband of 57 years, Abe, raised their two daughters and where she developed her love of lobster rolls, Patriots, Red Sox and Cape Cod potato chips. She worked for WIC (Women, Infants and Children), as well as with a physician for many years. The greatest tragedy of her life was the death of daughter, Donna, at age 18. Her greatest joy was Bonnie's success as an attorney, judge and district attorney.Ann and Abe moved to San Diego in 1993 to be close to Bonnie. Until Abe's death in 2008, they lived in Rancho Bernardo and were members of Ner Tamid. They were active with PFLAG and rode in every Gay Pride Parade, plus enjoyed meeting new friends during Bonnie's campaigns. They attended Citizens of Courage Luncheons and District Attorney Awards banquets, among other activities. They loved dogs, taking Nicole and Ellie to dog parks in Rancho Bernardo and Poway. They traveled with family on cruises, trips. Ann was a skilled knitter, knitting instructor and a member of the San Diego North Coast Knitters Guild. She met weekly with knitting friends in what became known as Queen Ann's Court. She also loved playing Mahjong with friends and on her computer, plus going to Bingo. She will be remembered for her feisty nature and ability to make friends easily.Ann is survived by Bonnie, Denise, and "adopted" daughter Judy. She was predeceased by Abe, her twin sister Florence Goldblatt and daughter Donna. She will be dearly missed by her loving relatives Steven Siskin and Raschelle Dichter, Paul Siskin, Jeff and Cathy Dichter, David and Nadine Siskin, Salley Dichter and Ralph Williams, Kathy and George Dichter, Bruce Dichter, Dana and Jordan Cohne , Chris Succi, Diane Ruble and Bill Green, and Donna Nelesen. Many knitting buddies will remember her talent and their fun times together.A service will be held this summer in Brockton, Mass. In lieu of flowers, consider a donation to Elizabeth Hospice, Jewish Family Services or Serving Seniors.
Published by San Diego Union-Tribune on Feb. 28, 2021.
To plant trees in memory, please visit the Sympathy Store.
MEMORIAL EVENTS
To offer your sympathy during this difficult time, you can now have memorial trees planted in a National Forest in memory of your loved one.
MAKE A DONATION
MEMORIES & CONDOLENCES
7 Entries
Hey Bonnie, I was so sad to hear about your mom's passing. She was one of those special moms who listened and cared about other people. I remember going to the beach with with her a lot and spending time with her sister and your cousins. I'm sorry for your loss.
leslie siegel
Friend
April 9, 2021
Our little knitting group will miss our Queen Ann. She was a feisty lady we all loved to be around.
Jan Davis
Friend
March 8, 2021
Ann was my inspiration in how to grow older with a positive attitude. She was usually game for some fun - attending a knitting gathering, going out for lunch, having her hair and nails done, enjoying a good laugh. She lived life HER way and I always admired her for that. I will miss her friendship so very much.
Mary Barranger
Friend
March 8, 2021
Dear Bonnie, Denise, and Judy ~

Though it has been years since last I saw her, I recognized the photo instantly, and sent my deepest sympathy and loving thoughts your way. We all know our parents must pass, but nobody says how to truly prepare for it. Ann was a force of nature, just like her wonderful daughter(s). I will always picture her with knitting needles clicking rhythmically away, holding yarns in the finest of jewel-tones. Please know I hold you in my heart, and in my prayers. God Bless.
Linda Hughes
Acquaintance
March 4, 2021
Ann Dumanis was a very lovely and loving lady. It was my great pleasure to have Bonnie introduce me to her. May God bless her soul and comfort her family and friends.
Pamela O Neil
Friend
February 28, 2021
Dear Bonnie, even though I did not see her very often, your fun, radiant, smiling, warm-hearted Mom was one of my favorite people. I am so sorry to hear about her passing and feel so bleessed to have known her. Sending love and heartfelt condolences to you and the family.
Ken Druck
Friend
February 28, 2021
I met Ann at PFLAG meetings, in Rancho Bernardo. She was supportive and wise. I adored her sharp wit and commitment to the LGBT community. My life was made richer by having known Ann.
Lisa Clarke
Acquaintance
February 28, 2021
Showing 1 - 7 of 7 results