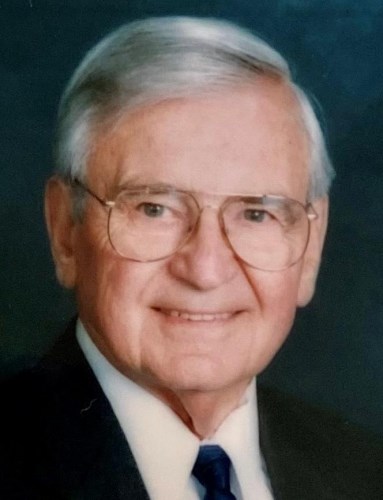 Byron F. White II June 3, 1922 - November 18, 2021 San Diego, CA
Byron F. White ll died peacefully in his sleep with his loving wife Gail by his side, on November 18, 2021 at 10:30pm. Byron was born on June 3, 1922 in Ellsworth, Kansas to parents Byron F. White Sr. and Sabina White, who both had careers in academia but who also lived on a working farm in Pretty Prairie, Kansas.
Byron and his three siblings, Stephen, Nancy (Helm), and Herbert, grew up in a busy home filled with music lessons, school work, sports, and farm chores. Because of their parents' professions, the family moved a lot but they always came back to the farm which they inherited in Pretty Prairie.
Byron graduated from Mulvane High School in 1939 with a voice and clarinet scholarship. That summer, Byron and his older brother Steve, hitch-hiked to California to see the World's Fair in San Francisco. The entire trip cost them $17, which they saved by working in the harvest fields. They lived on a diet of bread and peanut butter, and slept outdoors on a blanket they rolled up and carried with them.
Byron attended Southwestern College in Winfield, Kansas where he met his first wife, Muriel Smith (Kimball). He graduated in 1943 with a music degree and had every intention of becoming a music teacher when the war broke out. During WWll he served three years in the navy on destroyer escorts as an anti-submarine officer.
After the war, Byron discovered an interest in law and attended the University of California Boalt Hall School of Law, obtaining a degree in tax law as well as a CPA designation. He was called back to the navy during the Korean War, this time to San Diego as an instructor of submarine warfare.
Always eager to expand his knowledge, he enrolled at San Diego State in 1946 for two semesters of business courses and for fun, sang in a barbershop quartet there, called the Tonsorial Trubadours.
Byron's love of San Diego's weather, beaches, and backcountry com- pelled him to stay, raise his family and open his law practice. White & Froelich (Charles) opened its doors in 1956 with Paul Peterson joining the practice a year later. The firm made several changes over the years to include Sol Price and Irl Robinson.
Byron was a visionary, a real estate specialist and a mentor to many in the fields of real estate law and estate planning. His clients loved his receptive, warm-hearted demeanor and he had many business relationships throughout the county.
An exciting moment for Byron was when John F. Kennedy appointed the late Byron R. White (aka "Whizzer White"), to the United States Supreme Court. Six of his clients mistakenly thought he was appointed to the Court and sent him champagne to congratulate him. He kept the champagne and had a big party for his friends.
Byron was a member of the Lion's Club, the San Diego Yacht Club, and the Point Loma Community Presbyterian Church.
From his earliest years in San Diego, Byron took a keen interest in the city's backcountry, investing in some of the county's most rural acreage at that time. He would hike for hours through the chaparral, often bringing his children with him to explore the oak groves and creek beds.
Byron was blessed with a terrific sense of humor and quick wit, always at the ready with a parody or riddle. His "speeches" at familial events often had everyone in hysterics. Music continued to be an immeasurable enjoyment for Byron and he would while away the hours at his baby grand piano, singing and playing in his "rinky-rink" style that he was known for. He loved show tunes, The Beatles, The Beach Boys, and Glen Campbell. In addition to music, Byron loved to swim and play tennis.
In 1970, Gail Shaver graced Byron's path, and they were married in 1979. World travel became their favorite activity, especially to very exotic destinations from monasteries in Tibet to the great Gobi Desert. They toured the ice fields of Greenland and explored the ancient ruins of Troy. They also loved the National Parks in the US and were lured by the crystal clear water of Lake Tahoe. And of course...many trips to Disneyland and the other great theme parks of Southern California with the grandkids.
Gail and Byron loved watching sports together and followed the Chargers all over the country, sometimes ending up on the same flights as the team. Byron and Gail were rarely apart and accumulated a cache full of memories the size of Kansas, which brought Byron solace during the final weeks of his life.
Byron is survived by his wife Gail; his four children Byron III, Shelley, Meredith (Richard), Stephen; four grandchildren, Hilary (Ronnie), Emily, Taylor (Kristina), Marney; and two great-grandchildren, Landen and Audrey.
In lieu of flowers, please send donations to The California Nature Conservancy.

Published by San Diego Union-Tribune on Dec. 5, 2021.
To plant trees in memory, please visit the Sympathy Store.
MEMORIAL EVENTS
To offer your sympathy during this difficult time, you can now have memorial trees planted in a National Forest in memory of your loved one.
MAKE A DONATION
MEMORIES & CONDOLENCES
5 Entries
Gail, I'm so sorry to read about the loss of your beloved Byron. Having gotten to know you two, as my patients, I know first hand what a wonderful life you had together and how much you loved each other. I'm so glad I got to know Byron. He was such a humble gentleman with a heart of gold and an infectious smile. I know it will be hard for you to live without him, but I hope you'll take comfort in all the years of wonderful memories you two had together.
Jeri Badour, Registered Dental Hygienist
December 30, 2021
Our thoughts and prayers are with you, Gail, and the family.
Cynthia Muckey May and Irene Evans
December 15, 2021
Byron was a gentleman, mentor, and major influence on my career. I respect him greatly, owe him dearly, and send my very best wishes and love to the family.
David Resnick
December 7, 2021
Mr. White was to me a very close reminder of my own father. A man who obviously was wise without embellishments. I believe fate was how we met when we bought our property from him. We feel very blessed to own such and think of him often. My thoughts and prayers are with the family. Such a kind and honorable man must have shed his honors throughout his family. Such a blessing!
Mike Stewart
Other
December 6, 2021
Shelley- my thoughts and prayers are with you and your family during this time of sadness for the loss of a father who lived a very full life.
Susan Campion
December 5, 2021
Showing 1 - 5 of 5 results