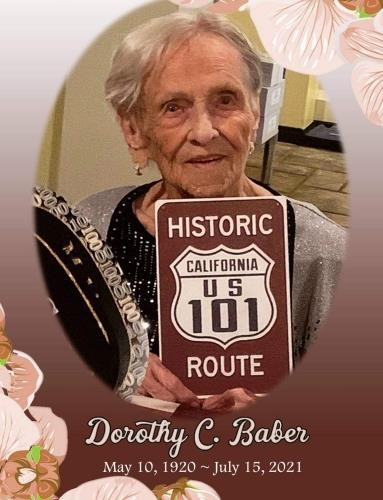 FUNERAL HOME
Greenwood Memorial Park & Mortuary
4300 Imperial Ave
San Diego, CA
Dorothy C Baber
May 10, 1920 - July 15, 2021
EL CAJON
101 years and 66 days and she was gone. Dorothy C. Baber died peacefully at her home of 63 years in El Cajon with family and friends around her on Thursday, July 15, 2021. Dorothy was born May 10,1920 in Junction City, Kansas to Berniece Pelsma and George W. Carson. She was the first of three children being joined by siblings Berniece (Scott) and Ralph, both of whom predeceased her. Dorothy lived her childhood and youth in Kansas before migrating with husband Al Baber and toddler daughter Jean to California in 1941. During WWII Al was serving in the South Pacific and Dorothy was like many other wives keeping the home and raising their three children, including son Larry and daughter Vicki. Dorothy lived in San Diego until 1958 when she moved to her current home El Cajon. Dorothy was at the vanguard of women when she entered the workforce full time in 1950 working at Consolidated Aircraft, which became Convair then General Dynamics. She continued working spending the last 14 years of her career working as a court room clerk for the County of San Diego Municipal Court in El Cajon.

At the court she became the go-to trainer for new judges, teaching them the ways of the courtroom from their new side of the bench. After retiring Dorothy continued to work as a part time fill in clerk for several years and then spent more than 20 years working as a volunteer at the information desk. She made countless friends during her years working in the court. In the late 1950's Al developed an interest in coin collecting. As his interest in numismatics grew, Dorothy decided she did not want to become a "coin widow" and dived right into the hobby. Although she never personally became a huge coin collector, she was active working with many local, State and national coin clubs in supportive roles for the hobby. As a result of her work in support of the numismatic hobby, Dorothy was honored with many awards. Awards from The American Numismatic Association (ANA), which she has been a member of since 1968, include The Great Ladies of ANA Award in Memory of Faye Rochette 1982, Medal of Merit 1988, Outstanding District Delegate 1990, Farran Zerbe Memorial 1995, Glenn Smedley Memorial 1995, Presidential 1997, Century Club 2003, Lifetime Achievement awarded to the Baber family 2003, and just last year the Elvira Clain-Stefanelli Award. She was also highly active in the Tokens and Medals Society (TAMS) and was their secretary for twenty years and served as their president. In addition she was the President of the California State Numismatic Association for 2 terms and served on numerous numismatic organizations throughout San Diego county. Through all these activities Dorothy always liked to stress that she "collected friends" and that she did. Traveling was in Dorothy's blood, in her younger years it consisted of the major trip she took to emigrate from Kansas to California at the age of 21 and then regular road trips to visit family in Kansas. But once the children were grown, she traveled continually. She visited numerous cities within the USA, around the world and almost anywhere a cruise ship would take her, with a total of 38 cruises. She never could pin down one destination that was her favorite, but she did cruise through the Panama Canal seven times. Dorothy was preceded in death by her husband of 61 years Albert Baber and granddaughter Maria Stalnaker. She was the matriarch of five generations and is survived by son Larry Baber (Cecilia) and daughters Jean Baber (Clifford Hetz) and Vicki Sue Owens, plus their progeny numbering in the 90's. In lieu of flowers please consider a gift to Juvenile Court Book Club, Inc. PO Box 880706, San Diego, CA 92168.Services for Dorothy will be at Greenwood Memorial Park in the Garden Chapel on Tuesday, July 27, 2021 at 10 a.m. Internment will be at Glen Abbey in Bonita.
Published by San Diego Union-Tribune on Jul. 25, 2021.
To plant trees in memory, please visit the Sympathy Store.
MEMORIAL EVENTS
Jul
27
Service
11:00a.m. - 12:00p.m.
Greenwood Mortuary - Garden Chapel Courtyard
4300 Imperial Ave, San, CA
Jul
27
Entombment
12:30p.m. - 1:30p.m.
Glen Abbey Memorial Park
3838 Bonita Rd, Bonita, CA
Funeral services provided by:
Greenwood Memorial Park & Mortuary
MAKE A DONATION
MEMORIES & CONDOLENCES
Sponsored by Greenwood Memorial Park & Mortuary.
0 Entries
Be the first to post a memory or condolences.