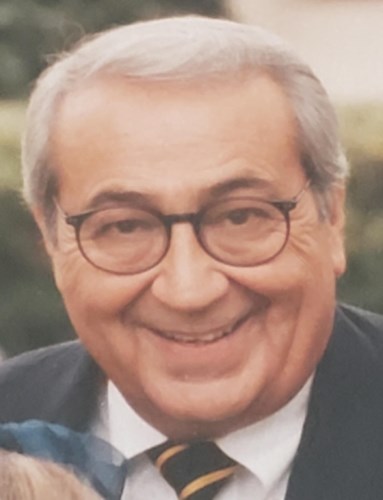 Edmond W. "Bill" Dominguez, a lifelong resident of North County and a member of the original Gastelum family in Carlsbad, was born September 19, 1938, and passed away on May 4, 2021.

As a boy, "Billy" quite often could be found engrossed in books that took him to far off lands he could only dream of; little did he know that he would have the great fortune of visiting most of the world. He was a prolific reader of everything from the classics to modern novels, with an uncanny knack for remembering facts. Also a WWII buff, his curiosity was kindled early on, while 22 of his Gastelum uncles and cousins served in various Campaigns abroad during the War. Billy kept track of each of them on his map.

Bill attended Pine Street School and Oceanside-Carlsbad High School (1956). Shortly thereafter, he enlisted in the United States Army and was shipped off to Germany, where he honorably served our Country. Upon his return, he enrolled and graduated from Mira Costa College and San Diego State University (1968). His career was in both government and the private sector, having served ten years as Executive Assistant to the San Diego County Board of Supervisors 5th District Office, and as Project Coordinator for the County Trans-border Affairs Office. He was appointed by Governor Deukmejian as Assistant to the Director of the California Dept. of Social Services.

In the private sector, he owned Bill's Barber Shop in Oceanside, and was a successful landlord. Bill was also associated with Rancho Santa Fe Savings & Loan Assoc., San Diego Federal Savings and Loan, and a founder of the San Dieguito National Bank. His community activities were vast and included 18 years on the Carlsbad Planning Commission. He was a founding member of the Agua Hedionda Lagoon Foundation, the Carlsbad Charitable Assoc., and the BECA Educational Foundation, where he took great pride in mentoring students with their education. He also was a past member of the Cal State San Marcos Hispanic Advisory Board. Bill was honored with many awards over the years, including Carlsbad Citizen of the Year for 2016, and inducted into the Oceanside High School Hall of Fame in 2019.

Bill and Bonnie (Sadiasa) were married in Italy in 1988, and had the great fortune to travel the world together. Their travels took them to China, India, Africa, Russia, Europe, Vietnam, Australia, and all points in between. They also had a second home in Lake Tahoe where they enjoyed family, friends, and skiing.

Visitation and rosary will be May 24, 2021, 5:00-7:00 PM, Oceanside Mortuary, and a Funeral Mass will be held on May 25, 2021, 1:30 PM, Mission San Luis Rey, Oceanside, with interment to follow at the Mission.
In lieu of flowers, the family requests donations may be made in Bill's honor to Doctors Without Borders or the North County Food Bank.
To plant trees in memory, please visit our Sympathy Store.
Published by San Diego Union-Tribune from May 21 to May 23, 2021.
MEMORIAL EVENTS
May
24
Visitation
5:00p.m. - 7:00p.m.
Oceanside Mortuary
602 South Coast Hwy, Oceanside, CA
May
25
Funeral Mass
1:30p.m.
Mission San Luis Rey
, Oceanside, CA
Funeral services provided by:
Oceanside Mortuary
MAKE A DONATION
Please consider a donation as requested by the family.
MEMORIES & CONDOLENCES
Sponsored by Oceanside Mortuary.
1 Entry
it was great knowing you, lots of good times... have a good ride .... oh yea , and say a few good words for me, you know i need them❤
victor nieto
Family
May 21, 2021
Showing 1 - 1 of 1 results