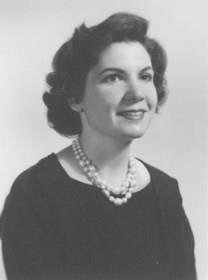 BORN
1924
DIED
2016
FUNERAL HOME
Goodbody Mortuary
5027 El Cajon Blvd
San Diego, CA
Fidelia Rita Dickinson September 21, 1924 - December 2, 2016 San Diego Dr. Fidelia R. Dickinson, age 92, died peacefully at home on December 2, 2016. She is survived by 4 nieces and 5 nephews and their families. Fidelia was born in St. Louis to Edward L. Fleming and Fidelia L. Ganahl. The family lived in Glendale, CA. She attended Immaculate Heart High School in Hollywood graduating in 1942. In August, 1942 she entered the Order of the Immaculate Heart Sisters in Hollywood and served as a teacher at Los Angeles Schools for 16 years having earned a B.A. and M.A. at Immaculate Heart College. In 1958, she left the order to reenter civilian life. She entered UCLA to obtain a doctorate where she met and married John W. Dickinson. They moved to Wisconsin where Fidelia took a position of the Univ. of Wisconsin-Milwaukee for two years. They moved back to CA where John taught at SDSU and she at USD because SDSU had a nepotism clause. Eventually that clause gave way to one of Affirmative Action, and she was able to work at SDSU first as a librarian and finally as an instructor in the English Dept. for the next 8 years. She hosted over 100 native Chinese from all parts of China seeking advanced degrees in the US. This was in memory of her oldest brother, Maj. Robert E. Fleming who disappeared in southern China during WW II. Contact Goodbody Mortuary for information (619-582-1700)
To plant trees in memory, please visit our Sympathy Store.
Published by San Diego Union-Tribune on Dec. 14, 2016.
MEMORIAL EVENTS
Dec
14
Viewing
4:00p.m. - 8:00p.m.
Goodbody Mortuary
5027 El Cajon Blvd, San Diego, CA
Dec
15
Service
11:00a.m.
St. Didacus Catholic Church
, San Diego, CA
Funeral services provided by:
Goodbody Mortuary
MEMORIES & CONDOLENCES
Sponsored by Goodbody Mortuary.
1 Entry
Fidelia was our choir director in 1946-47 when I was at Mother of Good Counsel Grade School in Hollywood. Later, she was on faculty at Immaculate Heart College when I was a student there. She was a devoted teacher and kind mentor to all of her students. Rest in peace.
December 14, 2016
Showing 1 - 1 of 1 results