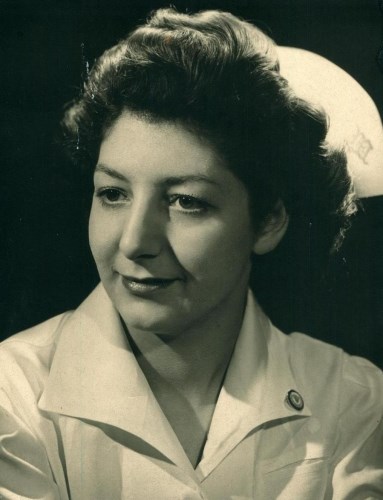 BORN
1924
DIED
2021
Geraldine Anna Jeri' Fiedler, RN July 12, 1924 - October 5, 2021 San Diego, CA
Our mother, Geraldine Fiedler, passed away peacefully with family close to her, at age 97.
She spent her childhood years in Farmingdale, Long Island, helping her family of nine run a restaurant specializing in her mother's Sicilian food. Mom became an accomplished cook, her specialty being homemade pies - usually churned out 10 at a time and filled with homegrown fruit.
The family moved to California in the early 1940's,where Geraldine enrolled in the Mercy College of Nursing. She received her 4-year RN in 1948, and at age 23 became the head nurse on the Labor and Delivery floor. She was very proud of those years of hard work, and always felt indebted to the wonderful nuns who taught her nursing.
In 1948, she married Walter Fiedler and had two children, Jeannie (Terry Needham) and Bill (Alene Gansemer). Together Walt and Jeri enjoyed many years with close friends and neighbors in the small Overlook Heights neighborhood, where she remained for the rest of her life. Jeri truly cherished the wonderful community of friends on "the hill." Huge neighborhood Christmas and New Years parties were the norm for many years, for which Jeri worked for weeks preparing delicious foods.
In her later years, she traveled the world, many times via Elder Hostels but also on cruises with her favorite sister-in-law, Norma Adams. Norma, who had previously traveled extensively, never let Jeri get too lost or too worried about anything that went amiss on their trips.
Jeri was also an avid bridge player, often running into people she had known in other areas of her life. She volunteered for Navy causes, along with many of her bridge partners. She was an accomplished seamstress, often donating curtains, table linens, etc., to these causes.
Mom was the matriarch of an extended family which included her two children, five grandchildren, Brooke Melling (Andrew), Kelly Teel (Brian), John Fiedler (Freda), and Max and Matthew Needham. She was also great-grandmother to eight: Tucker, Miles, Fiona, Alivia, Gavin, Riley, Mason and Julian. She loved each and every one of us, and will be deeply missed.
Our family would like to extend our deepest thanks to the caregivers who did such an excellent job these past few months, to Laura Rensberger, who provided food and joy for over a year, and our utmost gratitude to Dr. Paul F. Speckart, Mom's internist who patiently cared for her for nearly 40 years.
A private memorial was held.

Published by San Diego Union-Tribune on Nov. 21, 2021.
To plant trees in memory, please visit the Sympathy Store.
MEMORIAL EVENTS
To offer your sympathy during this difficult time, you can now have memorial trees planted in a National Forest in memory of your loved one.
MAKE A DONATION
MEMORIES & CONDOLENCES
4 Entries
Jeri lived many years in the Overlook Heights community creating warm memories with her neighbors. The story of her life experiences was a striving to help those in need. I admired her courage and perseverance, attempting to find the truth, and shared her knowledge with others. She will be missed.
Janette Faust
Friend
November 26, 2021
Both Julio and I worked with mother and daughter At Mercy! What a pleasure to know such wonderful people. I hope that the fond memories you all have will ease the mourning of the loss of this memorable woman. Her journey is complete and what a fine legacy she has left. She made this world a better place.
Julio and "Casey" Veinbergs
November 23, 2021
I had the privilege of working at Mercy Labor and Delivery with both mother and daughter. Wonderful women every way. It is so good to know that Jeri lived such a long and beautiful life. Now her journey is over and she leaves a spectacular legacy. May she rest in peace and may all the good times you shared comfort her family as they mourn her loss
"Casey" Veinbergs
Work
November 23, 2021
Jeri was a wonderful friend. I met her through bridge. With mutual friends, we met many times to play in her lovely home as well as other places. She will ever remain in my thoughts and memories. My condolences to her family...
Jacque Tucker
November 21, 2021
Showing 1 - 4 of 4 results