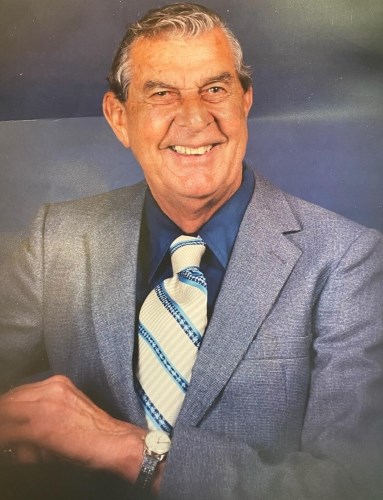 BORN
1925
DIED
2021
FUNERAL HOME
El Camino Memorial – Sorrento Valley and El Camino Memorial Park
5600 Carroll Canyon Rd
San Diego, CA
Herbert A. Bud Kirch May 1, 1925 - October 14, 2021 SAN DIEGO
Herbert A. "Bud" Kirch, 96, died peacefully surrounded by loved ones on October 14, 2021 in San Diego, California. He was born in Chicago, Illinois to the late Albert E. Kirch and Helen R. Kirch, nee Redig.
Bud graduated from Saint Philip High School in Chicago in 1943. He said the next day, every male classmate enlisted in the military. He proudly served in the U.S. Navy and was a World War II veteran, receiving the Victory Medal, the America Area Campaign Medal, and the ASIATIC Pacific Area Campaign Medal.
He married Wilma "Willy" Novack in 1962 and they moved to San Diego in 1980 after retiring at age 55 from Illinois Bell. He was a member of the International Brotherhood of Electrical Workers for 76 years.
He and Willy (who was the only one who called him Buddy) visited all seven continents. Bud was a devoted son, brother, husband, favorite uncle and friend to many. He was a man of deep faith and a long-time member of the Knights of Columbus. He enjoyed his "Bud" weiser and was an avid golfer, poker player, and bowler. Nearly every car Bud owned was a convertible, or, as his nieces and nephews called it, a "fold-down-top car." His nephews wanted to break Bud's record of waiting until they were 37 to get married.
He is survived by his sister Lorraine Baron of Bradley, Illinois, and 26 nieces and nephews. He was preceded in death by his loving wife Wilma, of 27 years; his brothers James and Philip; sisters Ruth and Dorothy Jean; and nephews Steven and Gregg Baron.
A Mass will be held on Friday, December 10 at 10:30 a.m. at Our Mother of Confidence Church, 3131 Governor Dr., San Diego. Interment to follow at El Camino Memorial Park, 5600 Carroll Canyon Rd., San Diego, CA.
In lieu of flowers, please consider donating to the Helen Rose (Redig) Kirch Family Scholarship for Special Educators, Winona State University Foundation, P.O. Box 5838, 175 West Mark Street, Winona, MN 55987
Bud lived life on his own terms and in his own apartment until his death. We will miss him dearly.