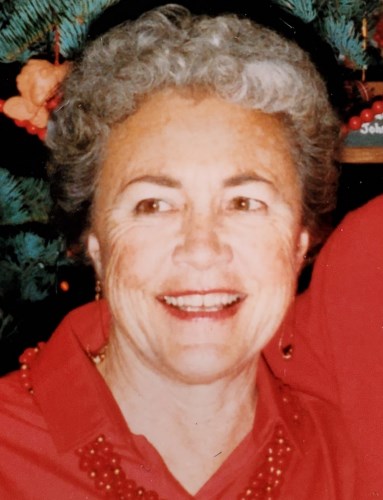 BORN
1925
DIED
2020
ABOUT
Susan Miller Dorsey High School
Lola Roach Larson
July 4, 1925 - December 21, 2020
Carlsbad
Lola Mae Roach Larson was born on the fourth of July, 1925, in Los Angeles to parents John (aka Jack) and Hazel Roach. She passed on December 21, 2020 at age 95 from health conditions made worse by COVID-19. Her sister Barbara was also born on the 4th of July two years before Lola. For many years they believed they were so special the entire nation celebrated their birthday. Lola was born into a pioneering motion picture family with her mother a background actor in silent films and her father a noted cinematographer, location scout, and casting director for Hal Roach Studios in Culver City, his brother's iconic "Laugh Factory to the World." Lola spent many days on the studio lot with the kids of Our Gang and her father's industry pals including Stan Laurel, Oliver Hardy, Zasu Pitts, and Will Rogers. Lola appeared in several of the Our Gang comedies and other short films.In addition to living in Los Angeles and Culver City, she spent considerable time as a child at her grandparents' avocado farm in Encinitas and on Catalina Island, a favorite haunt of the Hollywood crowd. While living in Encinitas in the 1930's she attended Central Elementary School. Lola liked to reminisce about Encinitas when most roads were dirt and every kid in town could be found on Saturday at the La Paloma theater watching the double feature. In the summer of 1941, at age 16, Lola was on Catalina Island and met the love of her life Eric Larson who was vacationing with his college buddies. She graduated from Dorsey High School in Los Angeles in 1943 and that summer she and Eric were married immediately following his commission as an officer in the Navy. That marriage lasted 62 loving years until Eric's passing in 2005.Following the end of WWII, they lived in San Leandro, California and Tacoma, Washington before purchasing and settling down on her grandparents' Encinitas ranch in 1955. Two of Lola's great granddaughters are now the sixth generation to live in the nearly 100-year-old family home.Lola was active in the P.T.A., scouts, YMCA, 4-H, Galloping Gourmets, and the San Dieguito Heritage Museum. As a Red Cross Water Safety Instructor she taught several hundred children and adults from North County how to swim. Much of her time was spent supporting and attending her children's sports, social, and academic activities. She worked in the Home Arts Department at the San Diego County Fair for many years and was herself a frequent ribbon-winner in various cooking and decorating competitions. An athlete all her life, as an adult she played recreational softball and competitive badminton. Lola was always quick with a joke and enjoyed a wide circle of friends in the Encinitas area, many dating back to her childhood. Water skiing and camping were favorite family pastimes with many days spent at Lake Tahoe (where the family shared a summer home), the Colorado River, and Estero Bay in Mexico.

In retirement Lola and Eric traveled extensively, visiting more than 60 countries and traveling by motorhome to all 49 continental U.S. states. Avid boaters, for nearly 20 years they spent the winter months in Cabo San Lucas chasing marlin and dorado. At home, a favorite retirement activity was enjoying their grandchildren's activities. Later in life Lola found a spiritual home at the Unitarian Universalist Fellowship of San Dieguito and had the companionship of Bobby Gooding and care by friend Mary Bressi. Her last residence was Las Villas de Carlsbad where she received compassionate care for several years. Lola was predeceased by her parents, husband Eric, daughter Christine, sister Barbara, and daughter-in-law Sandy. Lola is survived by her sons Eric (Jennifer), Jon, Doran (Jennifer), grandchildren Bobbi-Lynn, Scott (Michele), Nate (Susan), Ryan (Alexis), Zac (Jennifer), Julia, and Shayne and great grandchildren Cassie, Eric, Rilo, Russell, Fern, and Roland.Due to the pandemic, no services are planned at this time.
Published by San Diego Union-Tribune on Dec. 27, 2020.
To plant trees in memory, please visit the Sympathy Store.
MEMORIAL EVENTS
To offer your sympathy during this difficult time, you can now have memorial trees planted in a National Forest in memory of your loved one.
MAKE A DONATION
MEMORIES & CONDOLENCES
3 Entries
The Moen Family has many fond memories of the Larsons! Sending our love to the family.
Sharon Moen Tarbell
Friend
January 11, 2021
I am Scott, Lola's oldest grandchild.
It's good to hear from the Tanchers.
Before I was a year old, the family home caught fire....the family all got out and were in the front yard.
Mr. Tancher ran by them and into the burning house looking for me.
He came out moments later, singed and sobbing because he couldn't get to my crib. I happened to actually be at my other grandmother's house for the
weekend. The Tanchers have been great family friends for many years.
I called her "Grandma", my younger sister as a child called her "Granola", the latest generation of grandchildren called her "Mimi" and we all miss her dearly.
It helps knowing she is with our grandfather and my mom and they are watching over us.
Scott Baird
Grandchild
December 30, 2020
Lola and I shared a birthday. We lived next door to the Larsons for years. Lola was a great lady. Before Lola and family lived in the family house, we lived next door to The Gayharts, her grandparents. At that time it was an old people’s neighborhood.
Kathy Tancher Cockerill
Neighbor
December 27, 2020
Showing 1 - 3 of 3 results