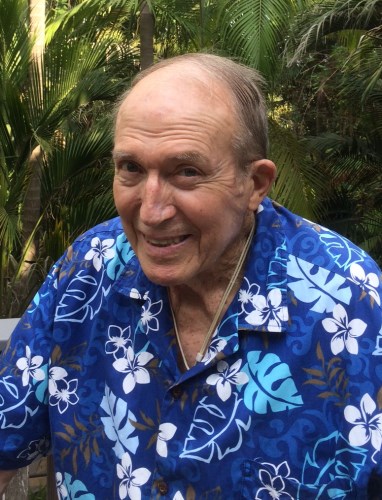 BORN
1927
DIED
2016
FUNERAL HOME
Erickson-Anderson Mortuary
8390 ALLISON AVE
La Mesa, CA
Peter Cuthbert February 5, 1927 - December 14, 2016 La Mesa/San Diego Peter Cuthbert, 89 years old, went home to be with the Lord on December 14 surrounded by his loving wife and devoted three daughters.Pete was born in Michigan in 1927, then later moved to Portland, Oregon, where he graduated from U.S. Grant High School in 1945. He subsequently joined the Navy, and was stationed at U.S. Naval Hospital in San Diego as a pharmacist mate. It was while he was in the Navy that he met his first wife, Lorie, at a USO dance. They were married nearly 40 years and raised three daughters: Cynthia, Lisa and Teri. In 1958, he obtained his Bachelor of Landscape Architecture degree from University of Oregon in Eugene, Oregon. A short time later, he and Lorie moved back to California where he was a resident for nearly 60 years. Upon moving to La Mesa, he worked for the International Boundary and Water Commission. Later he worked for the private civil engineer practice, Freeland, Christensen, Everson and Boas, where his largest project was the planning of the four thousand acre residential development of University City in San Diego. He later became La Mesa's first City Planner designing a community park and landscaping for various city buildings. His passion for plants and preserving nature lead to him to becoming a Park Planner for the County of San Diego from 1960 -1983. During this time he planned elements of 54 county parks. Some of his significant projects included Quail Botanical Gardens (renamed San Diego Botanical Gardens), San Elijo Lagoon, Heise Park, Lake Jennings County Regional Park, and Mission Trails Regional Park.Another passion of his was music. He played trumpet in Big Band groups in his younger days in Portland. When he joined the Navy, one of his responsibilities was playing morning and evening colors. After his first wife died, this love of music helped connect him to his second wife, Marjorie, who was a music professor and is a talented cello player. They have been married 28 years, and enjoyed their mutual passion for music as well as their travels to China and many countries in Europe.Retirement was not about to slow Pete down. He was involved in many community groups: La Mesa Beautiful, Grossmont Community Concert Association,Board of San Diego County Retired Employees Association, Mission Trails Region Park Citizen Advisory, Citizens Coordinate for Century 3, and the La Mesa branch of Kiwanis. He is survived by his sisters: Ann and Priscilla; his wife, Marjorie, and three daughters, Cindy, Lisa, and Teri, five grandchildren: Vince, Allison, Adam, Alyssa and Ricky plus great-grandchildren: Shiloh and Oliver.The family would like to express our gratitude for the outstanding care he received, with devotion and dedication from the doctors and nurses at UCSD, Thornton, and Jacobs Medical Center. The Celebration of Life will be held Wednesday, December 21 at 10:00 a.m at Saint Andrews Episcopal Church 4816 Glen Street, La Mesa, California. The burial will be at Greenwood Memorial following the service. In lieu of flowers donations can be made to the American Cancer Society at http://www.cancer.org/involved/index or San Diego Botanic Garden, PO Box 230005, Encinitas, CA 92023-0005.
To plant trees in memory, please visit our Sympathy Store.
Published by San Diego Union-Tribune on Dec. 20, 2016.
MEMORIAL EVENTS
Dec
21
Celebration of Life
10:00a.m.
Saint Andrews Episcopal Church
4816 Glen Street, La Mesa, CA
Funeral services provided by:
Erickson-Anderson Mortuary
MAKE A DONATION
Please consider a donation as requested by the family.
MEMORIES & CONDOLENCES
Sponsored by Erickson-Anderson Mortuary Erickson-Anderson Chapel.
7 Entries
My deepest sympathy to your family on the loss of your father.
Although we never met, my father met him prior to his own death in '98, while both were involved as volunteers in "La Mesa Beautiful" I recall my father speaking highly of him.
You can be very proud of your father's legacy.
God Bless his soul.
Raymond Chemes
December 22, 2016
Don and I remember with great fondness our trip to Mexico where we met Peter. He was a wonderful companion and we enjoyed spending some time with him and getting to know Marjorie when we moved to San Diego. We admire Peter's many accomplishments and know he's now finished with his suffering and in a better place.
Rosada Gonzales
December 21, 2016
I remember Pete in our Cardio-Rehab program at Grossmont Hospital along with Marjorie. A fun person to exercise with. I moved to Eugene, Oregon to be closer to my 2 daughters and families 4 years ago. I have attended the Cuthbert Outdoor Musical Arena here in Eugene for several concerts. The Arena is named after Pete's father. My thoughts and prayers to Marjorie and the family
Jim Pilling
Jim Pilling
December 20, 2016
A wish with deepest sympathy that time will bring you peace in this time of grief. I wanted to share a comforting scripture found at John14:18 "I will not leave you bereaved. I am coming to you. Hoping this heartfelt message will reveal my heartfelt understanding of the sorrow that you feel.
Respectfully,
Vanessa St. John
Vanessa St John
December 20, 2016
Dear Marjorie, Cynthia, Teri, Lisa and all your families
Uncle Pete will always hold a very special place in our hearts, with many great memories of family events and visits to Bellevue. He always amazed us with his attention to detail in all things, and his ability to remember all names. We are so very sorry for your loss.
Jeff and Kerry Bauman
December 18, 2016
Dear Lisa and family
Our deepest sympathy extented to you and all your family and Marjorie. You're in our thoughts and prayers now
Blessings
John and Susan Golia
susan golia
December 17, 2016
Offering our deepest condolences during this difficult time.
Erickson-Anderson Mortuary Erickson-Anderson Chapel
December 16, 2016
Showing 1 - 7 of 7 results