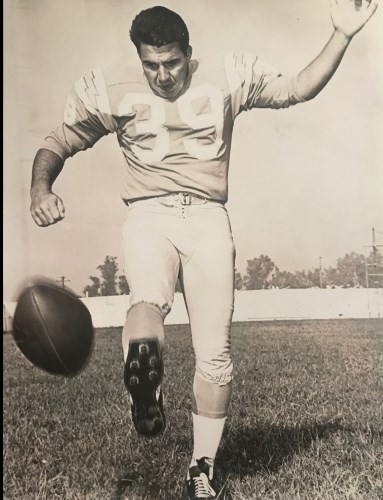 Richard 'Dick' Van Raaphorst
1942 - 2020
San Diego
Dick Van Raaphorst passed away at the age of 77 on Oct. 3, 2020, in San Diego. He was born in Charlevoix, MI, son of Helen and William Van Raaphorst, the eldest of three boys (Robert and Ronald.) Dick was a three-sport athlete in high school. He went on to attend The Ohio State University on a football scholarship, playing under Woody Hayes. Dick met and married his then wife, Joanne Whitney, while at OSU. Soon thereafter, eldest son Jeff was born. Dick played professionally for the Dallas Cowboys and San Diego Chargers. After retiring in San Diego, he became a broadcaster and later a real estate investor sons Billy and Mike were born during this time. Dick's career ultimately brought him back to his love of football as a coach/quarterback trainer. He was a father-in-law to Christi and Alison and grandfather to Jacob, Haley (her husband Dan), Cade, Michael, Caroline, and Grant.Dick's children, their spouses and grandchildren were blessed to receive his unbridled love and support, along with the occasional life lesson. His friends knew they could always depend on him. Coach Van Raap influenced many of his players by teaching them to work hard, be accountable and stay humble. The community of South Mission Beach was a second family to him later in life. He will be missed but never forgotten.A private remembrance will be held at a later date.Donations may be made in his memory to The First Tee of San Diego: https://www.thefirstteesandiego.org/donate/
Published by San Diego Union-Tribune on Oct. 16, 2020.
To plant trees in memory, please visit the Sympathy Store.
MEMORIAL EVENTS
To offer your sympathy during this difficult time, you can now have memorial trees planted in a National Forest in memory of your loved one.
MAKE A DONATION
MEMORIES & CONDOLENCES
2 Entries
Larry and I have fond memories of Dick from the SDCC. We played with he and Joanne in the couples group on Sundays. Our boys played together in Junior Golf. He was a great father and roll model. We are sad that he has passed.
All our love to the family,
Larry & Cheryle Antinone
Cheryle & Larry Antinone
Friend
October 24, 2020
The Brawley gang would like to express our sincere condolences! VanRaap helped our sons with football, shared his expertise, and was just an all around great man. We will miss seeing you at the beach! Love, The Currier & Wharton Family
Marlene & Andrew Currier
Friend
October 16, 2020
Showing 1 - 2 of 2 results