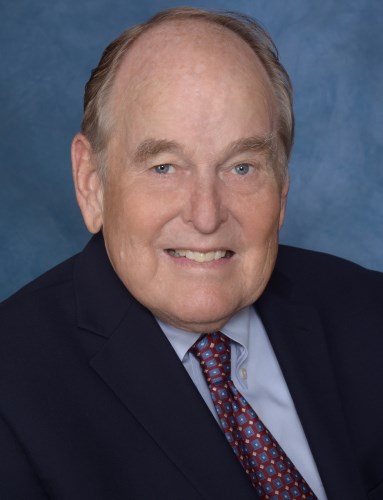 BORN
1942
DIED
2019
Robert A. Bob' Prahl March 19, 1942 - January 16, 2019 San Diego Bob was born in Los Angeles to Carl & Peggy Prahl. He was raised in Encinitas and graduated from San Dieguito High. He attended SDSU where he joined Kappa Sigma Fraternity and made life-long friends. Bob excelled at rugby. His coach, Frank Mattarucci said, "Prahl is one of the finest American rugby players I have ever seen." At SDSU, he met the love of his life Jan Collins, but he did not ask her for a date for 17 years. Following college, Bob attended Hastings Law School graduating Order of the Coif in 1969. He returned to San Diego to begin his law practice where he specialized in real estate, corporate, and estate planning. He practiced until shortly before his death. He was married to Ellen Massey and raised a daughter, Mary. Bob served on the Vestry of thee churches and as Chancellor of two. His favorite outreach was to provide good coffee to the church. He relished time with his grandchildren, family and friends. He will be remembered lovingly for his generosity and humor. He is survived by his wife, Janet, daughters, Mary Prahl and Christina Clemm, son-in-law Josh, grandchildren Kylie Murrell, Colin, Owen and Rose Clemm, and many loving family members. A Memorial Service will be held at Holy Spirit Church at 6116 Arosa St. on Sat., 1/26 at 1 pm.
Published by San Diego Union-Tribune from Jan. 20 to Jan. 25, 2019.
To plant trees in memory, please visit the Sympathy Store.
MEMORIAL EVENTS
Jan
26
Memorial service
1:00p.m.
Holy Spirit Anglican Church
6116 Arosa Street, San Diego, CA
MAKE A DONATION
MEMORIES & CONDOLENCES
16 Entries
Bob helped us fight a tough battle to acquire property in Little Italy 20 or so years ago. In that battle We learned what a dedicated and trusted lawyer and friend he would be to us. We were honored to be invited to his home to celebrate an unforgettable Octoberfest celebration he and family hosted for friends and clients. And we would have the pleasure annually to provide him and his guests with foods for SDSU Homecoming and football games. He will be missed by all for his loyalty, trustfulness, faithfulness and humility.
Our condolences to his family and close associates.

Luigi and Roberto Assenti
February 14, 2019
We want to express our deepest condolences Jan. Bob was such a kind man and I am so happy I ended up in the same office and had the pleasure of knowing both of you. RIP Bob.
Joanne Ely
January 28, 2019
Dear Robert Skinner, In response from you to know more about Bob, as many people said yesterday at his service, he was a fun guy, a guy who loved jokes and fun times. Very dedicated to everything he did. As a football player he gave it everything he had, he was a linebacker as I recall and hit like a truck. It almost seemed like he was fearless in football, also rugby. Bob was a leader, but in many ways not always at the forefront, but he got things done. As a fellow baseball teammate he was a pretty good outfielder, had skills and had some power, but clearly his skills were better in football. I never actually saw him play rugby, but he told me he loved rugby and told me once in a scrum an opposing player grabbed him by the ears pulling him out of the pile. His ear was very black and blue from that encounter. I consulted him one time regarding a minor real estate problem I had, he gave me advice for me to go forward. I used to work at the YMCA in downtown San Diego...as a teacher I had a small classroom at the "Y" and often would notice him walking by on his way to work out. His office was in a tall building about a block away. We had lunch together a couple of times, he was always a generous man. As an Acolyte at St. Andrews Episcopal in Encinitas in the 50's he was like the rest of us, faithful and dedicated. Fellow students at Central Elementary (Encinitas) Earl Warren Jr. Hi (Solana Beach) and San Dieguito High School (Encinitas) he was popular. He as always a good friend....
January 27, 2019
Bob and I met in Elementary School in 1951....went to Earl Warren Jr. High, then San Dieguito High School. He was a top student and a terrific football lineman. He and I both played Varsity baseball for the Mustangs. He was a strong San Diego State supporter, particular in football. Excellent real estate attorney as well. Bob and I were acolytes together at Saint Andrews Episcopal Church in the 50's...among the very first from Father/Rev. John Bogart.

Jay Helmantoler
January 26, 2019
Bob Prahl was my father Jack Robinson's nephew. My father's mother, Mae Harrington Robinson, was Peggy Prahl's oldest sister. Mae located at 145-3rd Street in foggy, desertlike and beachy Encinitas in the . . . thirties? Another sister, or relative, Nelle, was, I think, the first to locate in Encinitas, later living on Orpheus Avenue with her husband, pharmacist, Doc Claydon. Of course, Mae's younger brother Jack Harrington and family were there too. But sister Peggy and her husband Carl Prahl and Bob and his sister Pam also lived in Encinitas. My father, likewise, graduated from San Dieguito in about 1937 a few years before Bob was born.

My grandmother, Mae's 3rd Street cottage was separated by a few doors from the Prahl's gorgeous green one on 2nd street by a small alley and surrounded by seas of ice plant on all sides, and a few massive, flowering trees.

When in 1952, or '53, at 18 months or so, I moved with my parents to Larkspur, California. Encinitas was my introduction to Southern California and the place I came to love most.

I still can remember visiting La Jolla in the fifties, as a small boy and loving the town. The great American mystery writer, Raymond Chandler, was still alive and living there. I was a child. But I can remember the structure and appearance of the towns, streets, the shops, the people and their clothing, and the hotels he writes about because they all existed and I saw and remembered, vividly, the things he described.

It really was all too beautiful, as the Small Faces sang. The beach communities north of San Diego, truly, were a strand of pearls.

Though a relative, I spent little time with Bob during his teen maturity. (Later in our lives, over a couple of decades, Bob took me to various beaches and tried to teach me body surfing; once I think I tried unsuccessfully for the better part of an afternoon to get on a board, under his tutelage.) This was during the heydays of Bob's sky-blue Mercedes.

Bob, like Pam, was so beloved. He always seemed willing to do anything for, and with, his family and relatives. Often at the drop of a hat.

In my memory castle, the Prahl families have many rooms, and a wealth of Californian and Mexican neighborhoods and places from Moonlight Beach in Encinitas, to Bob's Grand View Drive home in La Mesa to Pam Prahl and Baldwin Burch's enchanted first home on Norma Drive in San Diego. From Tony's Jacal in Del Mar (the Home of Turkey Tacos) after a day at the races, to Carnitas Uruapanense in Tijuana, BC, where the pork roasts marinating in copper troughs abutting the parking lot can be viewed before being converted into kilogram-sized platters of Carnitas inside the restaurant.

It might shock him, but Bob demonstrated to me something so many Americans never know, or come to realize: namely, that America is part of Las Americas.

San Diego has been fortunate to have families like the Prahls who see the need for communities to be built along the same lines as families.
Robert Robinson
January 25, 2019
Our fondest farewell to a special friend, and the father our dear daughter-in-law! We will miss his gentle humor and warm demeanor. Many happy memories we have shared with Bob over the past 14 years since meeting him in San Luis Obispo. trips to Hawaii together, horse racing at Del Mar, family gatherings for holidays and baptisms..to name a few. He blessed our life with his presence. Rest in peace..
Penny and Carl Clemm
January 22, 2019
Dear Jan - So sorry to hear that Bob had passed away . I haven't seen you guys in a long time , but I well remember the old days at St. Andrews . Jo Ann & I loved you both & so did Olga . She remembers Bob well . You were such a big part of that Church at that time --- always there helping out . I am basically retired , but still in the insurance business part time . I recently sold my car as I don't go to an office anymore , so I may not be able to make it to the funeral . FYI , we attend Skyline Church now . You will be in my thoughts & prayers . God bless . Richard Cook
Richard Cook
January 22, 2019
To Jan and the family of Bob Prahl - I remember him with such fondness. He was such a genuine good man and good friend. My deepest sympathies to you.

Joan Macfarlane (Joan Wise)
January 22, 2019
Sorry to lose a great guy like Bob. He was good friend at SDSU and through the years. One of smartest things Bob did was marry Jan Collins. What a team! Great parents and grandparents. My sympathy to Jan and the family. Godspeed my friend.
Mike Spurgeon
Classmate
January 21, 2019
In 1962 I came to know Bob as a fellow rugged at SDSC. He was a mentor both on and off the pitch. Later we became fraternity brothers where again he was a mentor leading by example.

Bob was an up front honest person from the day I first met him.

He was a kind, caring person with a warm smile that will be missed but not forgotten. He was a Good Man.

https://cure.pcf.org/site/Donation2?df_id=1561&mfc_pref=T&1561.donation=form1
Christina Clemm (Prahl)
January 20, 2019
I've only know Bob since June 2017 when my uncle Raymond Skinner of San Diego needed Bob to create a trust. Being Raymond's chosen executor and trustee I asked Bob to represent me. Bob was just one great person and lawyer extraordinaire !
My wife, Dianne, and I will miss his gentle kindness, wisdom and affection through the many months of his caring counsel. Our prayers for Bob, Jan, his children, grandchildren, Bob's devoted paralegal Becky, and all his family during this difficult time.
Robert Skinner
January 20, 2019
My condolences to Bob's family. I will miss him as a former colleague and more importantly as a friend.