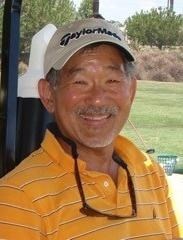 BORN
1947
DIED
2015
Stephen Saburo Fujii July 21, 1947 - October 22, 2014 san diego One year ago we lost a wonderful son, father, grandfather and husband. Steve was the son of Saburo and Jane Fujii. He was born on Kauai and raised on Kauai and Guam. He attended high school on Oahu and college on Maui. He served five years in the Navy during the Vietnam War and eventually settled in San Diego. He came to love San Diego and called it his home. After leaving the Navy, Steve earned his bachelor of science degree at SDSU. He then worked as a civil service employee for over 30 years for the Department of the Navy. He retired in 2005 and filled his days with consulting, surfing, fishing, golfing, traveling, and with his wonderful family. Steve loved the ocean. When the waves were small he could be found at South Mission surf fishing, and if the fish were biting he was always hungry to venture out onto the ocean for the day. Over the years he caravanned down the Baja Peninsula with family and fishing buddies and created some amazing memories for himself and his companions. Surfing was his particular joy. "Sealbite," (he earned that nickname after a painful encounter with a hungry seal), was a member of the Calumet Dawn Patrol. He was almost always the first one in the ocean just as the sun was rising. He was a fine, generous surfer. He was known for his welcome smile and his unique ability to make each person he encountered feel important and special. Golf was also a favorite sport. He admitted that he wasn't very good but really enjoyed the friendships he had developed while playing. Whether he was competing in The Vineyard Men's Club or traveling to various golf courses with his wife, Kathy, Steve was so grateful to be living such an amazing life. Steve's greatest love was his family. He leaves behind his mother, Jane Fujii; sister, Carolyn Idemoto; daughter, Angela Fitzmaurice, her husband, Devin Fitzmaurice, their children Nolan and Jack; son, Joel Fujii, his wife, Lorena Fujii, and their children, Malia and Joel, Jr. He was "Papa" to his family. He was generous, loving, always present, and full of joy. He was truly a wonderful man. Stephen, I miss you every minute of every day. Your loving wife, Kathy
Published by San Diego Union-Tribune from Oct. 22 to Oct. 25, 2015.
To plant trees in memory, please visit the Sympathy Store.
MEMORIAL EVENTS
To offer your sympathy during this difficult time, you can now have memorial trees planted in a National Forest in memory of your loved one.
MAKE A DONATION
MEMORIES & CONDOLENCES
5 Entries
Dear friend Steve you were truly one of the good ones and you are missed my friend God bless you and in heaven, I hope you are enjoying surfing and golfing and all the things you love to do. I know you are still watching all your loved ones proudly fr
om heaven.
cathy
Friend
October 16, 2020
Steve was a great friend and co-worker, I was looking for the surfing tribute that was filmed for him and found this. I know me and allot of his friends truly miss him. God bless him and his family.
cathy ruiz
February 19, 2016
Served with Steve on the USS Sterett Sonar gang. The best memory I have is his love for Sushi in Japan in 1973. He was a great shipmate.
Gary Pritchard
January 3, 2016
Was a great shipmate on the Sterett. Was lucky to meet with him a month before his passing here in Honolulu and had a nice visit. Don't know what happened but very sorry and my sympathies to the family.
Jerry Moe
Jerry Moe
January 2, 2016
In your time of sorrow, know that the help and strength you need to endure will come from your Heavenly Father.-Psalms 121:2
October 27, 2015
Showing 1 - 5 of 5 results