Ting-Chou "T.C." Yu
YU, TING-CHOU ("T.C.") T.C. Yu, 31, of San Diego, died Friday, June 23, 2006 at Sharp Memorial Hospital. Born in Taipei, Taiwan on August 4, 1974, T.C. arrived in the United States, on November 14, 1987, not speaking any English. After settling here, he graduated with honors from Mira Mesa High School in 1992. In 1997, T.C. graduated from San Diego State University with not one, but two degrees: a B.A. in Economics and a B.S. in Statistics along with a minor in accounting. That same year he became a citizen. He then taught mathematics in the Adult Education Program at San Diego High School. In 1998, T.C. joined CIC Research, Inc. in San Diego as the company's network administrator and programmer. In 2004, T.C. returned to SDSU to pursue an MBA while working full time. When he was not working or studying, T.C. "relaxed" by scuba diving, sky diving, and debating his friends. He was truly a person of strength and generosity who had an infectious laugh, well-developed calf muscles, and a devotion to his friends and family. He is survived by his loving mother, Linda Pao Yu Chiang, of Taiwan; devoted partner, Mark Vezzola; aunts and uncles, including Annie Yen Chiang of Poway, and cousins, Cindy, Sherri, and Mae Yen. T.C. is also survived by Mark's parents, Ruth (Glenn) and Louis (Beth) who loved him very much. At his request, T.C. will be cremated and his ashes scattered at sea in a private ceremony. A memorial service will be held at 2 p.m. on Sunday, July 9, 2006 at Park Manor Suites Hotel at 525 Spruce St., San Diego. Donations may be made to the Ting-Chou Yu Memorial Scholarship Fund, c/o The Campanile Foundation, SDSU, 5500 Campanile Dr., San Diego, CA 92182-8035.Please sign the guest book at obituaries.uniontrib.com
Published by San Diego Union-Tribune on Jun. 30, 2006.
To plant trees in memory, please visit the Sympathy Store.
MEMORIAL EVENTS
To offer your sympathy during this difficult time, you can now have memorial trees planted in a National Forest in memory of your loved one.
MAKE A DONATION
MEMORIES & CONDOLENCES
38 Entries 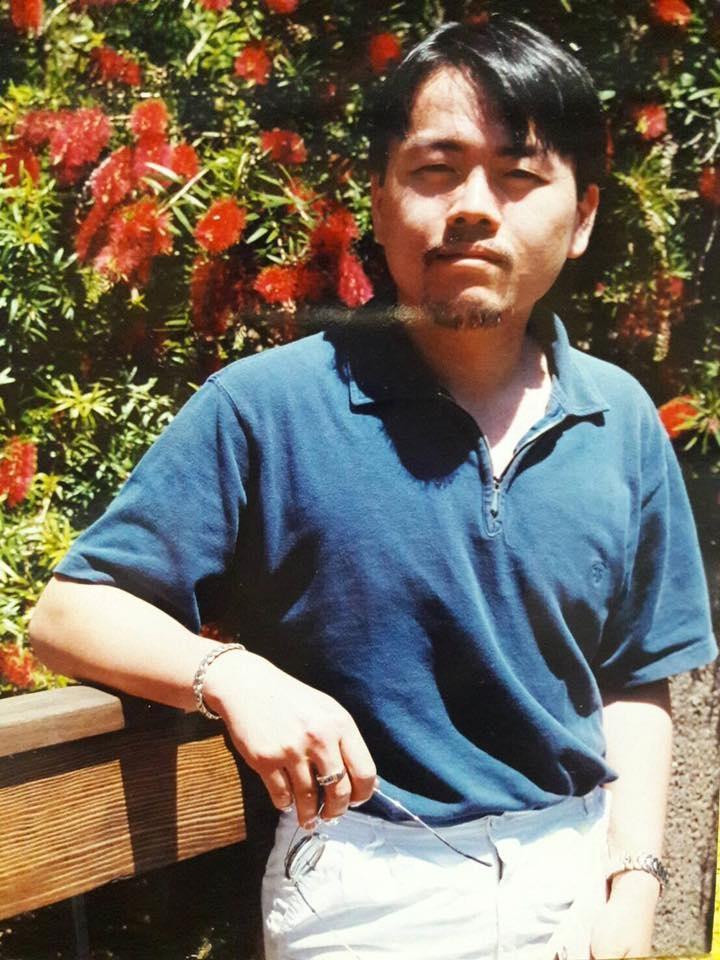 Cousin David Forslund and Ray Link
Raymond Link
July 4, 2006
Mark: You have my deepest sympathy. I still can't believe TC is gone. It seemed like yesterday that you, me and TC were hanging out at Starbuck on Santa Monica in Weho. I will always remembered him coming up to visit you on the weekends. TC was a great human being that touch all those who knew him. May he rest in peace. My thoughts and prayers are with you Mark.
Keith Vo
July 3, 2006
I met T.C. on one of his trips to Boston, and every since he has held a special place in my life. He will continue to do so.
Eric Day
July 3, 2006
Mark:

I only had the opportunity to meet T.C. one time but in that short period saw his humor and wit. He has touched many and will be missed by all.
Michele Swarts
July 3, 2006
TC Louie and I will miss you alot but the memories will be with us forever. You and Mark showed us a great time in San Diego,dining out at that wonderful Italian eatery, walking around checking out cars with Louie, and laughing alot.We had two great Christmas's with you and Mark,again going out to dinner,meeting my children, getting Louie buzzed on shots, and my favorite trying on my fur coat. We have the photos!Mark couldn't have chosen a nicer partner.I know you are looking down on me saying my computer skills still need work! I'll keep trying. T we will help Mark threw this time. love, Beth and Louie XXXOOO
LOUIE&BETH Vezzola
July 2, 2006
Any friend of Mark's is a friend of mine. Mark, I'm sorry I never had the chance to meet TC. You are truly one of my favorite friends and I'm sure he enjoyed having you share in his life. My thoughts are with both of you.
Steve Sarro
July 2, 2006
T.C. will be missed forever by all who knew him.
Ted Reuther
July 1, 2006
While I only knew T.C. briefly, I could see made a profound impression on many lives. His "fiesty" light will shine on brightly for eternity...
Timm E.
July 1, 2006
T.C., although I never knew you in life, I know you loved by evidence of the many who you had to leave behind, but who hold loving memories of you still. Love. There is no other pursuit in life more worthwhile. You have my respect and admiration for finding it in so short a time. While others live and still find it eluding them.
Cuong Nguyen
July 1, 2006
we love you T.we miss you very much.
louisℶ vezzola
July 1, 2006
T.C.
I'm shocked and sadenned by your passing.
There are many actions and words that I had always wished I could have taken back.
You were always a neat guy and a good friend. You will remain in my heart forever.
Ted.....
Ted Reuther
June 30, 2006
TC, may your soul rest in peace. Your memory will be in our hearts.
Beatriz Trujillo
June 30, 2006
I was blessed to have TC in my life for over two years. TC was full of integrity, heart, and life. TC always stood up for what he thought was right, spoke with honesty, and followed through with his intentions. Always. He had a huge heart and never took family and friends for granted and enjoyed every minute he spent with them. And he had more energy and life in him than 10 other people combined. There was never a dull moment with TC and often my time spent with him was laughing until my sides hurt. He was a great influence on me in so many ways and I am so very lucky to have known him and to have so many wonderful memories. My love, thoughts, and prayers go out to all his loved ones.
Melissa
June 30, 2006
You are so deeply missed. My life is enriched by having known you and being so fortunate to be able to know you as my friend.
Sara Kasteleyn
June 30, 2006
Skydiving together was just the beginning of many memories that I will always treasure. Being your office-mate at CIC was certainly a challenge but I would do it all over again in a heart beat. You will always remain in my heart and thoughts. Love You..
Adriana Engelbrite
June 30, 2006
Mark,
Our thoughts are with you. We know that you loved TC very much and that he made you very happy. Remember the good times and that will get you through.
Auntie and Uncle
John Forslund
June 30, 2006
TC, I will always remember your energy and passion for life. Urban Grind will never be the same without you. I know we met each other for a reason, and I cherish the time we got to spend together. Your 'infectious laugh', your competitive nature, your bright red face after just one margarita... I'll miss it all. Love to you always, sweet boy.
Shereen McIntyre
June 30, 2006
Mark,
My deepest sympathies to you during this very diffucult time. TC touched so many live. I am blessed that he was my friend. I am also blessed that through him, I met another good frind, you. Please know that I am here for you when ever you need.

Love
Scott Tule
June 30, 2006
JP Schuerman
June 30, 2006
To "T.C".s mother Linda Pao Yu Chiang and family,our sincere condolences. Mark my nephew, we are very saddened by "T.C."s passing. We will be praying for "T.C." and all of you this weekend at church.
Love, Mike & Lori
Michael J. Vezzola
June 30, 2006
Dear T.C.:
You have touched our lives and will be missed dearly here at C.I.C. May GOD Bless You and your Family. While our relationship has been largely in the office, T.C. I appreciate having had the opportunity to work and talk with you. I'll close with a prayer:

Grant that we may not so much seek
To be consoled as to console;
To be understood as to understand;
To be loved as to love.

For it is in giving that we receive;
It is in pardoning that we are pardoned;
And it is in dying that we are born to eternal life. --The Prayer of St Francis
Best Wishes:
Steven
Steven Stanley
June 30, 2006
T.C. you will be be be missed by so many: of your by Mark, by friends, coworkers, by your family and I know my dear sister Lois and I will miss you very much. I know from experience when someone dies so young, that it is especially hard on those who remain behind with your memories forever. May you rest in peace and we will always cherish the times we had together.
Mark Freeman
June 30, 2006
T.C. was very fortunate to have you in his life, and to be there to help his family and friends through this emotionally difficult time. I will see you at next week's memorial. Rich & Terrance
Rich Schulman
June 30, 2006
We'll miss you T.C.
Joe Miller
June 30, 2006
Mark: I'm very sorry for your loss. I only had a chance to meet T.C. on a few occasions, but he always seemed to be a very sweet and caring person. I'm sure he will be greatly missed by you and your family.
Steve Gribben
June 30, 2006
Showing 1 - 38 of 38 results