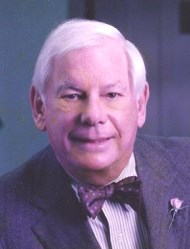 BORN
1926
DIED
2017
William E. Nelson July 16, 1926 - February 1, 2017 San Diego William E. Nelson died peacefully February 1, 2017 after a brief hospitalization. Born in Los Angeles he graduated from Venice High School and enlisted in the Navy during World War II. He served with distinction in the Pacific and was wounded during the battle of Iwo Jima. Following the War and as a result of the GI Bill he attended Pepperdine University and then Loyola University School of Law. Bill began his career at the law firm O'Melveny & Meyers and was recruited to join Union Bank where he acquired the interest and skills that would become the foundation of the twin streams of his long and distinguished business career banking and commercial property development. During this time he also earned a Ph.D. in Economics from the University of Wisconsin.Beginning in 1963 Bill maintained an independent law practice as well as an active career in property development. Among the projects he developed are The American Cement Company building, the office building at 6404 Wilshire Blvd, and the eight level Hill/Olive parking garage which was one of the first center-core parking structures ever built. Bill was President of Valley Company, later Prospect Center Inc. after which he served on the Board of Directors.In addition to his business career, Bill served on the faculty of the USC Graduate School of Business where he is remembered as an inspiring and sometimes intimidating professor of Real Estate and Finance.In the early seventies Bill's business and community's interests began to focus on San Diego where he moved full-time in 1976. From downtown to La Jolla the skyline reflects his efforts. What was called the Union Bank building on 525 B Street, now the Procopio headquarters, was his first major development followed by the Prospect Center building in La Jolla. The Scripps medical buildings on Genesee join the list. He also led the development of Scripps Clinic and Research Immunological Lab and Scripps Clinic and Research Medical Office Building. He founded Scripps Bank in 1984 and was President and CEO Scripps Institute of Medicine and Science 1992-1 996. In 2001 he and a small group of investors founded Regents Bank which became part of the Grandpoint family of banks in 2012.His community engagement was as active as his business activity. He chaired the San Diego Opera, Greater Chamber of Commerce, San Diego Blood Bank and San Diegans Inc. (now the Downtown Partnership).Bill is survived by Lollie, his wife of sixty five years, their four children, Lindsey(Dimity) of Pasadena, Neil of Seattle, Mark(Tess) and Anne of San Diego, nine grandchildren and two great grandchildren. We will all miss him. He will be interred at a private service with military honors at Miramar National Memorial Cemetery on March 17th.

To plant trees in memory, please visit our Sympathy Store.
Published by San Diego Union-Tribune on Mar. 5, 2017.
MEMORIAL EVENTS
No memorial events are currently scheduled.
To offer your sympathy during this difficult time, you can now have memorial trees planted in a National Forest in memory of your loved one.
MEMORIES & CONDOLENCES
6 Entries
Romans 519
Paul Price
February 28, 2018
You are not alone during this time of sorrow and pain. May God give your family strength and comfort to help you endure this loss. As you remember your beloved one, the God of peace give you comfort and peace in every way. May you find Strength from the love and care that surrounds you and comfort in the memories that you shared. Please accept my sincere condolences. 2 Thessalonians 2 15,16
February 28, 2018
My father, Byron B. Webb, Jr. served on the board of Scripps bank with Bill many years ago and considered it a great honor to be asked to do so by this brilliant man. My parents enjoyed the Nelson's friendship (and wine parties) for many years. To Lollie and family, our love and memories. Sincerely, Tori Webb (on behalf of Jeanette Webb).
March 8, 2017
Bill served as a member of our Board of Directors at Mission West Properties. He had great insight in assisting with complex issues. The wisdom of his knowledge enhanced my growth in the commercial real estate industry.

My condolences to his family.

Harve Filuk
Del Mar, CA
Harve Filuk
March 7, 2017
My condolences to his beloved wife Lollie, their children and grandchildren. He will long be remembered for his contributions to his community and the positive impact he had on those he loved.
JC & Shannon
March 7, 2017
As a young attorney, I had the blessing of working on a complex build-to-suit lease where Bill was involved. His manner, knowledge, and ability to solve tough issues made a major impact on me and my growth as a lawyer. He was a mentor to many, a gentleman & scholar, and a blessing for all those whose life he touched.