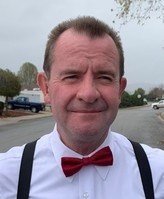 BORN
1959
DIED
2021
FUNERAL HOME
Reis Family Mortuary and Crematory
991 Nipomo Street
San Luis Obispo, CA
Curtis Hanale Bechtel
July 9, 1959 - July 2, 2021
Arroyo Grande, California - Curtis Bechtel was born July 9, 1959, in Honolulu, Territory of Hawaii, one month before Hawaii became a state. His middle name, Hanale, is Hawaiian for Henry. He was the fourth of five children born to Dale and Winnie Bechtel of Columbus, Ohio. Dale was a violinist and teacher, and was concertmaster of the Honolulu Symphony. Winnie worked in microbiology and played viola in the symphony. Curtis fondly remembered his early childhood in Honolulu, and returned to visit family many times as an adult.
When Curtis was 10, he, his mother, and two youngest sisters moved from Honolulu to the Mainland. Their belongings, including a 1930 Ford Model A, were shipped by ocean liner to Victoria, Canada, and they made the long drive in the Model A from Canada to the Los Angeles area.
Curtis began playing trumpet when he was 12. Some early musical experiences included performing in the New Year's Day Rose Parade, and the Disneyland Christmas Parade as a Marching Tin Soldier. In 1976 Curtis was selected to participate in the 60-piece America's Youth In Concert which toured Europe. His love of music and trumpet performance was a passion that continued his whole life.
Curtis attended California State University, Northridge as a music major. There, in 1979 he met his future wife Leslie Taylor, also a music major. After three years, Curtis changed his major to engineering and spent three years at Golden West Junior College, before transferring to Cal Poly, San Luis Obispo. Curtis and Leslie were married in 1985, and he graduated in 1986 with a Bachelor's of Science in Mechanical Engineering.
Curtis was blessed to have worked for 34 years in engineering, with almost 30 years at Mafi-Trench (later AtlasCopco), in Santa Maria. He was a gifted engineer and patient teacher who became a mentor to many co-workers during his career. His job in new equipment sales allowed him to travel to China, Korea, Europe, India, Trinidad and Tobago, Dubai, and throughout the US, among other places. Curtis' easy personality and witty sense of humor, and his deep understanding of and dedication to his work, earned many long-time friends in the industry.
Curtis was a member of the SLO Trumpet Alliance, San Luis Chamber Orchestra and SLO Wind Orchestra. In addition to music, Curtis loved sailing his boat in Morro Bay. He had a natural ability to read wind, tide and other sailing conditions, and was a safe and sure captain, always willing to take out family or friends for a day sail. Curtis had many other interests and hobbies including stained glass, tennis, jogging, crossword puzzles and tinkering.
Curtis was a devoted father and grandfather; a funny, caring, fun-loving, sentimental, and kind-hearted man. He passed away at home on July 2, 2021. Curtis leaves behind Leslie, and their children Cole and Royce, grandchildren Noah and Claire, siblings Karen, Mark, Lorna and Sarah, and other family members, friends and co-workers. He will be deeply missed by all who knew him.
Leave comments for the family on Curtis tribute page at www.reisfamilymortuary.net
Donations can be made to Arroyo Grande Police Officers' Association, www.ArroyoGrandePOA.com

Published by San Luis Obispo County Tribune on Jul. 18, 2021.
To plant trees in memory, please visit the Sympathy Store.
MEMORIAL EVENTS
To offer your sympathy during this difficult time, you can now have memorial trees planted in a National Forest in memory of your loved one.
Funeral services provided by:
Reis Family Mortuary and Crematory
MAKE A DONATION
MEMORIES & CONDOLENCES
0 Entries
Be the first to post a memory or condolences.