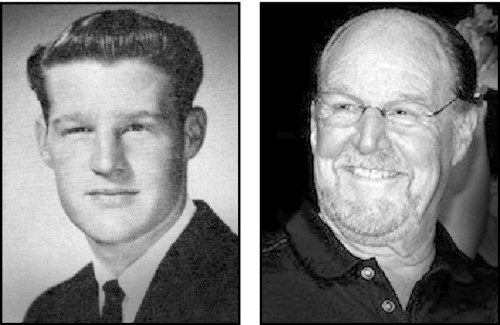 FUNERAL HOME
Chapel Of The Roses Mortuary
3450 El Camino Real
Atascadero, CA
Donald Blythe Donald Ray Blythe passed away peacefully on September 24, 2016, at his home in Templeton, Calif., surrounded by his family. Don was born in 1938 in Clayton, New Mexico. He fought a courageous battle after being diagnosed with a brain tumor in September of 2015. The following was written by Don; "My family always kidded me about writing my own obituary so I did. I was born to two great parents, Dorothy and Bill Blythe. I had two special grandparents, Jack and Mimi Dunn. The four of them tried hard to raise me and my two brothers, Bill and Skip, in the right way. I think they did a good job, but I guess that God will be the final judge of that. It is easy to recap my accomplishments in life. I did not accomplish anything that the world will remember me by, but I did do some great things: I loved a most beautiful woman and wife, Letha, for 55 years. I, along with Letha, brought four very special people into this world. I cannot even imagine a greater accomplishment than Kurt, Kindra, Kory and Kraig. I hereby now publicly apologize for hanging the "K" on all of them. My life has been filled with great joy and excitement because of these people and all of the others that I have been so blessed to have in my life. How I wish that I could list them all but I know in my heart that they all know who they are and that I loved them. I know this because I told them. I loved my life. I will miss being here." Don started working at JC Penney in Santa Barbara in 1960, and held many positions in his 35-year career, including salesman, department manager, store manager, district manager, regional children's division and regional sales promotions. In 1995 he took early retirement and moved to "Rancho Notso Grande" in Templeton. Don was an active member in the communities that he lived, including The United Way, the Santa Barbara Jaycees, the YMCA, The Childs Estate (now the Santa Barbara Zoo), and served as the Foreperson of the San Luis Obispo County Grand Jury. Besides his family, he loved fishing. He and his closest friends, and eventually his sons, spent 45 years fishing the Klamath and Trinity rivers in northern California, and 20 years fishing the Rogue river in Oregon and various locations throughout Alaska. Wherever Don went, people said that he was one of the most generous people they had ever met. He would strike up a conversation at the drop of the hat, and always had a kind word to say. Throughout his life, people always commented that Don was one of the most influential people in their lives, be it a close friend, a colleague at work, or someone he had just met. Don wholeheartedly believed that human kindness was the most important aspect of any relationship, and if you ever knew him, you would most certainly agree. Don leaves behind his wife Letha, children: Kurt (Donna), Kindra (Jimmer), Kory (Michelle) and Kraig (Leigh); grandchildren: Dannon, Shaunna, Matthew, Rachel, Alexandra, Kamryn, Hayden, Jack, Josh, and great-granddaughter Aubryana. Burial services will be held with immediate family members, and, instead of a memorial, Don asked that the family throw a party. In lieu of flowers, please consider a donation to San Luis Obispo CASA, or your favorite charity. Sign his guestbook at sanluisobispo.com/obituaries
Published by San Luis Obispo County Tribune on Oct. 2, 2016.
To plant trees in memory, please visit our Sympathy Store.
MEMORIAL EVENTS
To offer your sympathy during this difficult time, you can now have memorial trees planted in a National Forest in memory of your loved one.
Funeral services provided by:
Chapel Of The Roses Mortuary
MAKE A DONATION
Please consider a donation as requested by the family.
MEMORIES & CONDOLENCES
6 Entries
Judy Silence
It's always sad to lose a classmate especially one who was such a central figure. God bless Letha and kids. I pray for your comfort and strength,
but many happy memories.
October 4, 2016
Don always seemed to be in the center of everything in high school. Goodbye Don, another member of the Class of '56 we shall miss. We will join you one by one. Helen McMahan
October 4, 2016
Dear Bill and all the Blythe family, I was so sorry to hear of Don's passing. May he rest in peace.
Richard Klaucke
October 2, 2016
Even though I hadn't seen Don in many years I remember the fun all of us used to have "cruising" around SLO in the 50's. He was a very person. And the parties we went to in Santa Barbara when Lou & I lived in Oxnard. Always a happy man.
Naomi Estrada
October 2, 2016
Beautiful obituary <3 I felt I had a special connection with Don as we always said, "We were both members of a club we never wanted to be in." Although I feel his death came too soon in life, I am comforted in knowing what an amazing family he had, along with his glorious homestead. "Rancho Notso Grande" is one fine place to hang your hat ~ His life was blessed. Don, you were a very special and loving person ~ Your warm heart and friendly smile is something I'll never forget. May the wine closets in heaven be set to the perfect temperature.
Kathy Mauno
September 30, 2016
I will always remember Don's humor, his dedication to all things that make life easier for others, and his specific work in helping our Templeton Women's club celebrate the 100 year party, plus his work in the internal business of the club. All of us that worked with him so appreciated his caring ways and valuable input for anything asked of him. He will be missed by so many of us.
Diane Olson
September 28, 2016
Showing 1 - 6 of 6 results