A graveside service will be held at 11 a.m. Monday, June 14, at Arroyo Grande Cemetery.

Jerome was born Aug. 16, 1968, in Anaheim, Calif. He moved to the Central Coast at the age of 13 and was a member of Calvary Chapel in Arroyo Grande. Jerome graduated from Arroyo Grande High School in 1986. He entered the Marine Corps after graduation and was honorably discharged. He then received an associates of arts degree from Cuesta College and attended Cal Poly. He was a student of life, pursuing a master's degree.

Jerome was an avid surfer and a talented, self-taught pianist. Following a debilitating injury at the age of 25, Jerome focused on his love of literature, music and good conversation. He was an independent spirit known by all for his quick wit and love of life.

Jerome will be greatly missed by his mother, Helen; siblings and their spouses, Judy and George Smith, Keith and Olga Essen, Claudia and Doug Hickman, Curtis and Annetta Essen, Glenn and Kathy Essen, and Sally and Scott Garlinghouse; a plethora of nieces, nephews and cousins; and an ocean full of friends.

He was preceded in death by his father, Orville Essen; and his nieces, Jessica Marie Essen and Heather Smith.

In lieu of flowers, contributions may be made in Jerome's memory C/O Curtis Essen, 529 Allen St., Arroyo Grande, CA 93420.

Arrangements are under the direction of Marshall-Spoo Sunset Funeral Chapel of Grover Beach.
To plant trees in memory, please visit our Sympathy Store.
Published by San Luis Obispo County Tribune on Jun. 11, 2004.
MEMORIAL EVENTS
No memorial events are currently scheduled.
To offer your sympathy during this difficult time, you can now have memorial trees planted in a National Forest in memory of your loved one.
MEMORIES & CONDOLENCES
17 Entries
There really isn't much that hasn't already been said. You will be missed, by us, your audience.

I'm sure they can use a few laughs up in heaven. The pain is gone and you are at peace.

We'll miss you, greatly.
Bob
June 15, 2004
That time of year thou mayst in me behold
When yellow leaves, or none, or few, do hang
Upon those boughs which shake against the cold,
Bare ruin'd choirs, where late the sweet birds sang.
In me thou see'st the twilight of such day
As after sunset fadeth in the west,
Which by-and-by black night doth take away,
Death's second self, that seals up all in rest.
In me thou see'st the glowing of such fire
That on the ashes of his youth doth lie,
As the death-bed whereon it must expire,
Consum'd with that which it was nourish'd by.
This thou perceiv'st, which makes thy love more strong,
To love that well which thou must leave ere long.
William Shakespeare

God Bless you Jerome, you're shared your soul with us and my your spirit be eternally happy.
Jennifer Delgado
June 14, 2004
I am an online acquaintance of Jerome's from New Mobility website. His presence will be missed by many. My sympathies to his family.
Betsy (Lizbv)
June 14, 2004
Jerome - words fail me right now to express how I feel, and probably what is toughest is when friendships fail. I truly regret not being there over the past years. I should have been. The memories I have with you are some of my best and I wish you the peace and rest that you deserve.

Todd M. Pitcher
Todd Pitcher
June 13, 2004
I was shocked and saddened when I was told of the news. I will miss Jerome's quirky ways that never seemed to fail to make me laugh.
I can imagine him catching the ultimate wave in Heaven! Hang ten, Jerome!
Michele
June 12, 2004
Jaes' surf is finally up again. His God must be smiling. What a comforting thought!

"I Can Only Imagine"

"I can only imagine
what it will be like
when I walk
by Your side..."
~Mercy Me 2004
Joy Taylor
June 12, 2004
jerome was a very special friend to me...he will be greatly missed...he was a great teacher and a wonderful friend
erin peterson
June 12, 2004
A special thanks to everyone who has signed this guestbook..Jerome was my uncle by marrage but my bestfriend for life..He was just 2 years older then me..So we were very close..As kids we were practically attached at the hips..We lived in Orange County near eachother..Then we all moved up to the Central Coast where once again we continued to grow together..He taught me how to appreciate life and to love myself..He was the greatest guy in the world and because of that his death has hit me in a very hard way..He was not only my bestfriend but he was like a brother to me as well..My life would have been a void if it wasnt for his prescence..When reading this guestbook I see the thoughts of other people he has influenced and I know that because of this he will live on forever because he has touched so many people and lives in their hearts..Included in this post is my email address..If anyone would like to send there thoughts to the family I will be more then happy to pass them on to my aunt and uncle..And again thank you to everyone that leaves there kind words in here..
Kasandra Heflin
June 12, 2004
jerome is my sisters brother in law and i have known him since he was alittle kid. he had a great sence of humor and a good outlook on life. he loved surfing and his nieces and nephews were a big part of his life. even when he was in intense pain you never saw it. he is with god now and no longer in pain. i know jerome your probably surfing the clouds in heaven or skate bording on the streets of gold. you are greatly missed by your family. barb
barb heflin
June 12, 2004
I only knew Jerome as Jaes at New Mobility through his posts.
He had a way of writing that truly was unique and I will miss him.
My sincere condolences to his family and friends.
Kathy
June 11, 2004
Jaes, You are truly one of a kind. My heart is saddened by your passing. You will be greatly missed. Holly
Holly Sundin
June 11, 2004
Jerome will be missed by his many friends - many of whom never met him in person. I've only talked via the New Mobility board, but find myself saddened by his death. He would breeze in, give us a quote or say something fun and then breeze out. Bye, Jaes...
Laurie (LASHB)
June 11, 2004
Jerome, known to me as Jaes, will be greatly missed at New Mobility, a website on which he has participated for several years. We have many posts there mourning his loss. He had so many friends who are grieving his passing.

My condolences to his family. He was so proud to be an uncle and shared pictures with us. We miss him so much.
cass
June 11, 2004 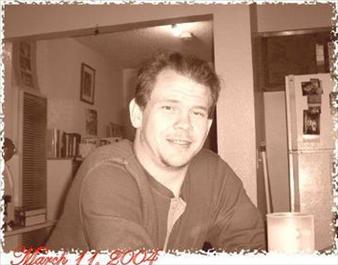 For what is it to die but to stand naked
in the wind and to melt into the sun?
And what is it to cease breathing, but to
free the breath from its restless tides, that it may
rise and expand and seek God unencumbered?

On ly when you drink from the river of
silence shall you indeed sing.
And when you have reached the mountain
top, then you shall begin to climb.
And when the earth shall claim your
limbs, then truly you shall dance.
— Kahlil Gibran

Godspeed dear friend.
Flicka Dukes
June 11, 2004
My sincere condolences are sent to Jerome's family and friends, my prayers are with you at this most difficult and tragic time.

Jerome and I were "friends" via the Internet. For almost 6yrs we shared e-mails, AOL Instant Messenger chats, and through posts on the message board at the New Mobility website.

Jerome touched my heart and soul in so many ways, so many times, the grief I feel is overwhelming, yet I believe he is truly at peace now and free of pain at last.

Sincerely,
Donna M. Kidner
June 11, 2004
Never think of this as an ending. In our new life we there are no disabilities.
Dave McCoy
June 11, 2004
My condolences to friends and family of a man I knew very little but somehow liked just by reading his posts at New Mobility.
Yaw
June 11, 2004
Showing 1 - 17 of 17 results