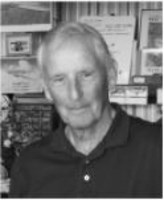 BORN
1927
DIED
2021
FUNERAL HOME
Reis Family Mortuary and Crematory
991 Nipomo Street
San Luis Obispo, CA
John Richard De Vries
September 12, 1927 - June 8, 2021
San Luis Obispo, California - June 8, 2021 at the age of 94 John Richard DeVries passed away quietly at his residence at Sydney Creek in San Luis Obispo.
John De Vries was a friend to all. He had many friends from his 49 years of work at Douglas Aircraft in Long Beach, CA. John continued to make new friends when he moved to Arroyo Grande, CA in 2002. John and friends were regulars for breakfast at McClintocks restaurant in Arroyo Grande.
Born September 12,1927 in Huntington Park, CA to Neta DeVries (Delano) and Henry DeVries, John grew up during the depression raising chickens to help the family's income along with his brother Henry De Vries Jr. Henry was three years older than John.
The family moved to Michigan for their father's work, living in a farming community close to Ann Arbor, Michigan. John attended Manchester High school where he graduated. He joined his older brother and father working in the machine tool industry in Ypsilanti, Michigan. After a few years, the family moved back to Southern California.
.
John and his brother and father settled in to work at Douglas Aircraft in Long Beach, California. John had always had a fascination with airplanes. As child he built several flying model airplanes. At Douglas, he excelled with his mechanical talents. John was now eligible for the draft during the Korean War. He decided to join the Air Force. During his enlistment he tested very high on his mechanical skills and was assigned to be a nuclear technician. John was also on the list for possible pilot training. He was stationed in Malstrom AFB, Montana. He was offered pilot training after he had been in the service for three years, but declined because of the required ten-year commitment. He received an honorable discharge in 1956. John had purchased a Great Lakes bi-plane that was in pieces and stored it in our garage. His idea was to rebuild the plane and fly it. His mother wanted the space in the garage and sold the airplane while John was away in the Air Force
Returning to Southern California, he took up flying and earned his private pilot's license. He purchased a damaged airplane and rebuilt and flew it for several years. While at Douglas, he met the love of his life, Rosemary Steele; they married in 1965. John joined his younger brother Bob with their airplanes at various air shows in California. John and Rosemary traveled to Berlin, Germany several times to celebrate Christmas with his younger brother's family. The brothers also traveled to the Netherlands to visit their uncle, Ipe De Vries. John's wife Rosemary passed away in 1985. John retired from Douglas Aircraft in 1987 after 49 years with the company.
John moved to a new home in Arroyo Grande, CA in 2000 to be near his retired brother younger brother and sister-in-law. John liked hard work and constructed brick walls and a patio by himself for his new home. About this time, he returned to his hobbies of golf and bowling. John bowled in competitions around the state and usually came home with some winnings. He devoted his spare time to helping his brother restore a WW 2 airplane. After ten years and hours of work, it flew in 2018.
John always had a love of cars. He owned many foreign sports cars and love MoPar products.
He will be missed around his favorite lunch and breakfast spots in Arroyo Grande.
John was preceded in death by his Father Henry Devries, Mother Neta Devries, his brother Henry DeVries Jr., and his wife Rosemary DeVries, uncle Ipe DeVries and aunt Tina DeVries. He is survived by his brother Robert De Vries; nieces Erika de Vries and Britta Vigurs; plus great-nephews Dove Lepson, Zane Lepson de Vries and Sequoia de Vries, and Dylan Vigurs.
We would like to thank the staff at Sydney Creek for their loving care of John, and Wilshire Hospice for their care and service. No services are planned. John will be buried in Rose Hills Memorial Park in Whittier CA next to his wife Rosemary.In lieu of flowers, please make donations in Johns Name to the Alzheimer's Association and the American Cancer Society. Reis Family Mortuary provided their service

To plant trees in memory, please visit our Sympathy Store.
Published by San Luis Obispo County Tribune from Jun. 11 to Jun. 13, 2021.
MEMORIAL EVENTS
No memorial events are currently scheduled.
To offer your sympathy during this difficult time, you can now have memorial trees planted in a National Forest in memory of your loved one.
Funeral services provided by:
Reis Family Mortuary and Crematory
MAKE A DONATION
Please consider a donation as requested by the family.
MEMORIES & CONDOLENCES
1 Entry
The SLO Airport community was blessed to have John De Vries in our midst to admire his craftsmanship in the many designs and fabrications necessary to restore their rare and gorgeous Ryan STA and who always made time to pass on interesting personal history of the early days of flight in Southern California. It is unlikely we will witness a talented and gentle man like John anytime soon.
Michael Dubin
Neighbor
June 17, 2021
Showing 1 - 1 of 1 results