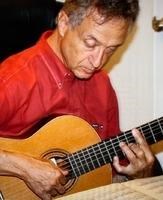 BORN
1941
DIED
2021
Edward Klein
December 15, 1941 - August 6, 2021
Santa Cruz
Edward Klein, passed away at home 8/6/21 from Parkinson disease. He was a beloved husband, father, brother, grandfather and friend. He is survived by his wife Noelle of 54 years, daughter Zephra, brother Phil, sister Leslie and his four grandchildren: Zachary, Parker, Brandon and Samantha.
He was first of all a gentle man, a devoted Family man, a great community leader with an intelligence and kindness that impressed and inspired many, he was influential in making Santa cruz a better place for all, where he lived since 1967. He touched many lives and each walked away a better person for having known him.
In 1965 he moved to Paris to study classical guitar with Masters, he continued to play for a lifetime, he was a fine classical guitarist. He and Noelle opened Pretty Mama Inc. in 1973, closed it in 2014 when they retired. Those who knew him, knew that he was an extraordinary human being, a man of Honor and integrity. He lived by those rules. He will be greatly missed.
He will be honored and celebrated in a private ceremony with a scattering at sea. Donations can be made to Santa Cruz Hospice.


View the online memorial for Edward Klein
Published by Santa Cruz Sentinel on Aug. 29, 2021.
To plant trees in memory, please visit the Sympathy Store.
MEMORIAL EVENTS
To offer your sympathy during this difficult time, you can now have memorial trees planted in a National Forest in memory of your loved one.
MAKE A DONATION
MEMORIES & CONDOLENCES
Sponsored by santacruzsentinel.com.
0 Entries
Be the first to post a memory or condolences.