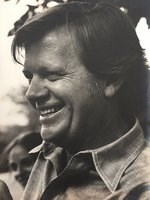 BORN
1928
DIED
2018
FUNERAL HOME
Benito & Azzaro Pacific Gardens Chapel - Santa Cruz
1050 Cayuga St
Santa Cruz, CA
Hayden V. White
July 12, 1928 - March 5, 2018
Resident of Santa Cruz
It is with deep sadness that we announce the death of Hayden V. White, who passed away peacefully at dusk at his home on March 5, 2018, surrounded by his family. Hayden was a 40 year resident of Santa Cruz, although he traveled the world.
Born on July 12, 1928 in Martin, Tennessee of humble beginnings, his family worked the fields in the South, and saved money to travel North by taxi to start a new beginning, his father finding work in the car factories of Detroit, hoping to buy land of their own in Tennessee. Hayden was a traveler even then, moving between Tennessee and Detroit seven times in his first 15 years.
Enlisting in the Navy towards the end of WWII, Hayden completed flight training in Pensacola. He used his G.I. bill to begin his academic career at Wayne State University in Detroit, receiving his B.A.in History in 1951, and his M.A. degree from the University of Michigan in 1952. Spending two years in Rome, Italy on a Fulbright Fellowship, he completed his dissertation research in the Vatican library on Church Reform in the Middle Ages, and received his Ph.D. in History from the University of Michigan in 1956.
Since that time, Hayden received 8 Doctor of Humane Letters (Honoris Causa) Degrees among which: the University of Michigan, Wesleyan University, North Carolina State University, The European University of Budapest, Gdansk University, and the Free University of Berlin. As professor, he was a gifted, charismatic teacher and mentor to many worldwide. He held teaching positions at Wayne State University, the University of Rochester New York, UCLA, Wesleyan University, UC Santa Cruz, UC Berkeley, and Stanford University. Among many other awards, he was an elected Fellow to the American Philosophical Society and the American Academy of Arts and Sciences. He was also awarded the prestigious title of University Professor in the UC System. Hayden ended his career as University Professor Emeritus at the History of Consciousness Department of the University of California, Santa Cruz, having previously retired from the Comparative Literature Department of Stanford University

Although trained as a medieval historian, the majority of Hayden's work focused on Modern European Intellectual History, literary criticism, philosophy, and historiography. One of his most important essays was entitled "The Burden of History" (1966), indicating the direction of his future work, which was to re-imagine history as a creative as well as a scientific enterprise. Metahistory: The Historical Imagination in Nineteenth-century Europe (1973), considered his landmark publication, initiated a major re-orientation in the field of historiography. It has been translated into more than ten languages. His last book, The Practical Past (2014) opened a new way of historical thinking outside the professional norms, insisting that history is a set of practical pre-suppositions accessible by rhetorical and literary means, which constitutes the ethical foundation of our daily existence.
Hayden White figured prominently in a landmark California Supreme Court case regarding covert intelligence gathering on college campuses by police officers [White vs. Davis]. During 1972, while a professor of history at UCLA and acting as sole plaintiff, White sued the L.A. Chief of Police, alleging the illegal expenditure of public funds in connection with covert intelligence gathering by police at UCLA. The covert activities included police officers registering as students, taking notes of discussions occurring in classes, and making police reports on these discussions. The Supreme Court found for White in a unanimous decision. This case set the standard that determines the limits of legal police surveillance of political activity in California.
Hayden's life was characterized by his passionate vitality and pleasure in human conversation. No topic was taboo. A man of wit and irony, he will be remembered for his human curiosity, warmth, and immense generosity. He was an excellent dancer and an accomplished chef, having received a culinary certificate from the Ritz Escoffier in Paris France. He will be missed.
He is survived by his wife of 46 years, Margaret Brose; his children Juliana Sarah Brose White, Adam Virgil White and David H. White; and his grandson David Ross White. He was preceded in death by his father Virgil White, his mother Ruby Alda Clark White, and his sister Helen White Dowling. The family would like to thank Hospice of Santa Cruz County, his physician Dr. Grace Laurencin, and his trusted friend, trainer, and caregiver, Josh Kemp.
A memorial service will be held at Temple Beth El, 3055 Porter Gulch Rd., Aptos, CA on Friday March 9, 2018 beginning at 10:30 am. A meal of consolation will follow. For those wishing to express their condolences or share a remembrance with Hayden's family, please visit www.pacificgardenschapel.com. 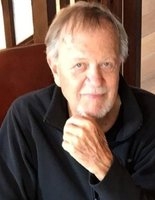 Published by Santa Cruz Sentinel on Mar. 8, 2018.
To plant trees in memory, please visit the Sympathy Store.
MEMORIAL EVENTS
Mar
9
Memorial service
10:30a.m.
Temple Beth El
3055 Porter Gulch Rd., Aptos, CA
Funeral services provided by:
Benito & Azzaro Pacific Gardens Chapel - Santa Cruz
MAKE A DONATION
MEMORIES & CONDOLENCES
Sponsored by santacruzsentinel.com.
18 Entries
Dear Margaret, thinking fondly of you and your family with the upcoming sad anniversary. Take good care of yourself. Un abbraccio
Pina Piccolo
Friend
March 2, 2020
Hayden, you changed my life. I will be eternally greatful for that.
Horst Freyhofer
February 5, 2019
Think of the wonder of his kindness and attentiveness to so many people, think of all the students he turned into serious scholars, think of the wit and humor with which every day he made the sunshine warmer in an otherwise chilly world. I remember years ago a young Hayden carrying Julie on his shoulders. It was with the same love and caring that he brought HOC into being and helped make it the most important program on our campus and brought in streams of the world's best scholars to teach or study with his students. What an amazing man! May God bless you, Hayden.
Harry Berger Jr
Friend
March 14, 2018
Lidia and I remember Hayden for his wit and his wisdom with great fondness, and for extending his friendship and food to two wandering Europeans on the Pacific coast. Iain Chambers & Lidia Curti, Naples, ITALY
March 12, 2018
I only met him once in Santa Cruz some 30 years ago, we had a brief but enlightening conversation about "general figurality"; but his work was a major influence on my notion of narrative and my understanding of history since I discovered "Metahistory" in the late 70s in Australia. A kind person, an exceptional intellectual, a true democrat...
PROF. DIDIER COSTE
March 12, 2018
My mentor and my friend, my condolences to his family. He helped me to shape myself at a time when I needed it and I feel as if I lost a significant part of myself in his passing. God bless my dear friend, may he rest in peace.
Lorenzo (Larry) Almada
March 11, 2018
I "met" Dr. White through his mind. And such a mind! And such a life of contribution to ideas, thought, and perception.
Thank you Dr. White.
diane hamilton
March 10, 2018
Margaret and family,

Our thoughts are with you at this difficult time. Wishing you peace in an abundance of wonderful memories and the assurance that his was a full and vibrant life, much admired and well lived.
Mary Jane and David Cope
March 9, 2018
I was Hayden's student in the late 80s and early 90s. I adored him; I was completely swept off my feet. His arguments about the difference between chronicle and historical narrative inform my psychoanalytic practice today as well as my writing and theory. However, I hid; sometimes literally, behind sunglasses, and one morning, during brunch, Hayden asked me to take off my glasses. I don't know if he actually said that the eyes are the mirror of the soul or if I just thought it, but, anyway, I began to stop hiding. I loved his mixture of kindness and fierceness; and his teaching changed my life. Laura Chernaik, London England
Laura Chernaik
March 9, 2018
Sincere condolences to Margaret and family, from Keala and Claudio
Keala Jewell
March 9, 2018
The world has lost a truly noble man. Hayden White was a prince of the intellect: clear, upright and profound. A loyal and loving friend to the very end. We are diminished by his parting, elevated by his memory.
Jeremy Adler
March 9, 2018
A great theorist and open and generous human being. You'll be greatly missed, Hayden!
Pina Piccolo
March 9, 2018
GRAZIE PER AVERMI INSEGNATO A GUARDARE IL TEMPO COME UN'INSIEME DI STORIE
LIVIA APA
March 9, 2018
We were so sorry to hear of Uncle Hayden's passing. He was such a generous and caring person and we will always remember his kindness. We wish we could be with you all at this time of sorrow but know that we are with you in spirit. Our sincere condolences to all of you.
Dan Dowling
Family
March 8, 2018
Sincere condolences to Margaret and family.
Lee Duffus
March 8, 2018
Dear Margaret and family:
I was so sorry to hear of Hayden's passing. I have many fond memories of the days when I got to know him when we were both members of the Humanities Council of Chairs. He was a
man of towering intellect who related well to everyone around him. He had the wonderful ability of defusing tense situations.

I offer my sincere condolences to the whole family at this difficult time.

David Orlando
David Orlando
March 8, 2018
Very sad to hear of Hayden White's death. My deepest sympathies to Margaret and his entire family. I was transformed as a scholar by reading his work. His legacy is enormous and will live on.
Rebecca West
March 8, 2018
Like so many others I was very fortunate to have known Hayden.
John Salter
March 8, 2018
Showing 1 - 18 of 18 results