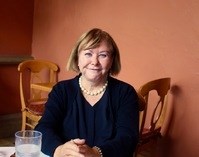 BORN
1937
DIED
2021
Janet Bumgarner
Aug. 6, 1937 - Sept. 3, 2021
Resident of Aptos
Janet Bumgarner (née McCarroll) died on September 3, 2021. Born on August 6, 1937, she's survived by her husband Bill and her four children Mark, Stephen, Kristin and Sean — as well as her sister Sharon Carlson and brother Mike McCarroll. She graduated from Notre Dame High School in San Jose and went on to attend Seattle University, San Jose State University and Cabrillo College. As a young woman she was an active member of the Ladies of Charity, and later in life volunteered at the St. Francis soup kitchen in Santa Cruz. In the 80's Janet taught at a pre-school while living in McLean, Virginia — and to her delight one of her student's parents invited her and Bill to a lunch in the Senate dining room. She was a successful real estate agent in Virginia and in Santa Cruz, CA. Outgoing and friendly, she loved to meet people and their dogs during her walks along the Seascape cliffs. Janet will be remembered for her elegant and playful sense of style, and her love of life. She will be dearly missed by her husband, her children, and grandchildren Kate, Whitton, and Toby.
In lieu of flowers, the family suggest donations to Second Food Harvest (https://www.thefoodbank.org/ways-to-give/).


View the online memorial for Janet Bumgarner
Published by Santa Cruz Sentinel on Sep. 8, 2021.
To plant trees in memory, please visit the Sympathy Store.
MEMORIAL EVENTS
To offer your sympathy during this difficult time, you can now have memorial trees planted in a National Forest in memory of your loved one.
MAKE A DONATION
MEMORIES & CONDOLENCES
Sponsored by santacruzsentinel.com.
1 Entry
We are so sorry to hear of the passing of Jan. Your whole family is in our thoughts and prayers. Its always hard for everybody when you lose a wonderful and caring wife, mother and grandmother. May God be with you all during this time.
Mike and Ramona Singer
Family
October 6, 2021
Showing 1 - 1 of 1 results