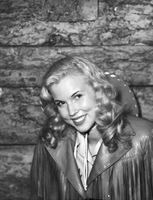 BORN
1928
DIED
2021
Joann Barbier
May 16, 1928 - June 6, 2021
San Cruz , California
Joann Barbier was born in 1928 to Alma Comes Smith and Isaac Newton Smith. Both parents were active in world War 1, with Alma serving as a nurse and Issac an air force ballooner. Growing up in Tarzana, California, with two older sisters, Nancy and Harriet, Joann was discovered by the Hollywood photographer, Edwin Bower Hesser, who launched her successful modeling career. Hesser's assistant at the time was Larry Barbier who soon established himself as a still photographer at Universal Studios. Joann continued her modeling work, even once modeling with Norma Jean Baker (later gaining fame as Marilyn Monroe). After joining in matrimony in 1946, Joann and Larry had 4 children, Jeff, Greg, Joel and Leigh.
Joann finished her undergraduate degree in 1967, leading to a position as coordinator of foreign students affairs at Pierce College in Woodland Hills, California. Shortly after, while visiting the studio of Native American artist Fritz Scholder in Santa Fe, New Mexico, in 1971, Joann purchased her first piece of art. Continuing her passion for art collection, Jo accumulated work from artists all over America throughout the rest of her life.
Realizing her gifts were the ability to enable, motivate and inspire others, Joann returned to school at Northridge State University in 1978, earning a masters degree in education, which she then used during her tenure at Los Angeles Mission college. After her husband retired from Hollywood, Jo and Larry moved to Cambria, California, in 1986 to be near his two sisters Mardi and Roz. During this time, Joann became a tour guide at Hearst Castle in San Simon. After discovering another passion, quilt making, for the next 25 years Joann created non traditional quilts that expressed both her personal history as well as her political observations, with subjects ranging from Rosa Parks, The Iraq War, William Randolph Hearst and World War 2. "Jo Barbier's Castle Quilts" were exhibited in the National Geographic theater Lobby at Hearst Castle in 2003.
In 2007 Joann and Larry relocated to Santa Cruz to be closer to their children and grand children. In Santa Cruz Joann joined the UCSC University Women club, the infamous quilting group, The Sew'n Sews and volunteered at the UCSC arboretum.
Joann and Larry were life long Christian Scientists.
Joann passed away peacefully June 6th of this year in Aptos, California. She will be remembered for her incredible kindness to all who knew and loved her and a generosity of spirit that steadfastly responded with comfort and guidance to any friend in need. She consistently recognized and supported the best qualities in each person she came in contact with. Constantly welcoming people into her home, Jo loved hosting gatherings and events creating deep friendships and community. She was a devoted wife, mother, grandmother, aunt, as well as a passionate supporter of the arts.
Joann Barbier, preceded in death by husband Larry Barbier, sons Gregory Barbier and Joel Barbier . Joann is survived by her son Jeff Barbier, daughter Leigh Barbier, daughter-in-laws Robin McFarland and Jana Barbier, son-in-law Homer Flynn, seven grandchildren, Heath, Trevor, Jana, Isabelle, Reid, Madeleine and Rossy, three great grand children as well as many nieces and nephews.


View the online memorial for Joann  Barbier
Published by Santa Cruz Sentinel on Jun. 20, 2021.
To plant trees in memory, please visit the Sympathy Store.
MEMORIAL EVENTS
To offer your sympathy during this difficult time, you can now have memorial trees planted in a National Forest in memory of your loved one.
MAKE A DONATION
MEMORIES & CONDOLENCES
Sponsored by santacruzsentinel.com.
0 Entries
Be the first to post a memory or condolences.