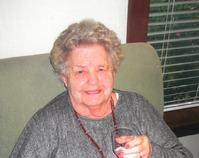 BORN
1923
DIED
2021
FUNERAL HOME
Santa Cruz Memorial Funeral Home
1927 Ocean St
Santa Cruz, CA
Joyce "June" Hoover
August 28, 1923 - August 23, 2021
Resident of Santa Cruz
June died peacefully five days before her 98th birthday. Born in Lynden, Washington as the youngest of eight children she earned the nickname "Babe" growing up. June later graduated from Wenatchee High School in Wenatchee, Washington. After leaving high school, she met and married Hugh Hoover, a sailor in the US Navy and Normandy invasion veteran. While he was on active duty, they lived in many places across the country, and in the Panama Canal Zone. June and Hugh had many adventures together including owning a candy store in Santa Maria, California. They later moved to Hollister where both were actively involved in service organizations. June lived at Dominican Oaks for nearly 20 years. She really loved the community and was blessed with many friends there. She was active in the many events including bridge, poker and calling bingo. She is survived by her daughter, Joyce Mullen, two granddaughters, Jennifer Hall (Gene), Kelli Gowan (Michael), and two wonderful grandsons, Robbie and Ryan Hall. June is predeceased by her husband of 57 years, and her ashes will be buried next to his grave at the San Joaquin Valley National Cemetery in Santa Nella. Her quick wit and great sense of humor will be missed. Contributions can be made in her name to Hospice of Santa Cruz County. If you would like to send your condolences to June's family, please visit www.scmemorial.com

Published by Santa Cruz Sentinel on Sep. 12, 2021.
To plant trees in memory, please visit the Sympathy Store.
MEMORIAL EVENTS
To offer your sympathy during this difficult time, you can now have memorial trees planted in a National Forest in memory of your loved one.
Funeral services provided by:
Santa Cruz Memorial Funeral Home
MAKE A DONATION
MEMORIES & CONDOLENCES
Sponsored by santacruzsentinel.com.
0 Entries
Be the first to post a memory or condolences.