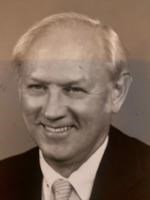 BORN
1926
DIED
2021
FUNERAL HOME
Santa Cruz Watsonville Cremation & Burial Service
550 Soquel San Jose Road
Soquel, CA
LaRoy Joseph Morter, Jr.
Mar. 22,1926 - Aug. 26, 2021
Soquel
On August 26, 2021, Roy Morter, loving husband and father of four, passed away peacefully at the age of 95 at home in Soquel, CA, with family by his side. Roy was born on March 22,1926 in New York City, son of LaRoy,Sr. and Stella Morter. He married Nettajo Borders in 1946, having met her at University of Maryland. After 75 years together, Roy survived Nettajo's passing by less than four months.
Roy always excelled at sports, lettering in football at Dartmouth, Harvard and the University of Maryland. He joined the Navy Pre-flight officer training in 1944, and played football for Navy that year. In 1949, he graduated from USC, and later received his M.A. in Industrial Psychology from Columbia University. Roy worked for General Motors for 35 years, ending his career as Director of Labor Relations for GMAD. He then embarked on a second career as a financial planner and investment advisor for many years.
Roy was always industrious and enterprising. He enjoyed gardening and working around his "Plum Good Apple Orchard." He was particularly proud of his 27 varieties of fruit and nut trees. With Nettajo, he loved traveling, adventuring to new places, and visiting his family. He was an avid follower of sports all his life, and an active Rotarian up until his last year.
He is survived by his sister, Dorothy Moscato; his daughters: Sandra, Cathryn (Ingo), Teresa (John) and Victoria (Nancy). And by seven grandchildren and eight great-grandchildren.
A memorial service will be held on Friday, October 1, 2021 at St. Joseph's Catholic Church in Capitola at 10:30 a.m. In lieu of flowers, the family requests that donations be sent to the Mid-County Senior Center, 829 Bay Ave., Capitola, CA 95010.