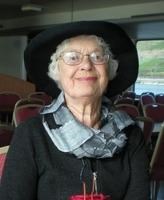 BORN
1940
DIED
2021
Louise Dietrich
July 22, 1940 - August 31, 2021
Aptos
Louise Elizabeth Ceconi Dietrich, a long time Aptos-area resident, died on August 31 after a short illness. Born in Portland, Oregon, she graduated from San Jose High School and attended San Jose City College.
Louise was a sweet, compassionate, selfless soul who had a kind word for everyone. She was an avid reader and had a keen sense of humor.
Louise was a very supportive wife and mother who made many cross country relocations with three young children and provided a loving home at each location.
After settling in the Aptos area she continued her career as a fulltime homemaker. Later, she enjoyed working for NASCAR in its Scotts Valley office for a number of years.
She is survived by Jack, her husband of 57 years, children Kevin, Cristin and Elizabeth, brother-in-law Michael and wife Paula, brother-in-law Stephen and wife Sue, and six grandchildren. She was predeceased by her father Mario Ceconi, mother Neva Stark Nunes, and two sisters.


View the online memorial for Louise Dietrich
Published by Santa Cruz Sentinel on Sep. 9, 2021.
To plant trees in memory, please visit the Sympathy Store.
MEMORIAL EVENTS
To offer your sympathy during this difficult time, you can now have memorial trees planted in a National Forest in memory of your loved one.
MAKE A DONATION
MEMORIES & CONDOLENCES
Sponsored by santacruzsentinel.com.
0 Entries
Be the first to post a memory or condolences.